Refugees for Refugees is a Belgium-based ensemble that includes musicians from Syria, Tibet, Pakistan, Iraq, Afghanistan and Belgium who are united by their aspiration to intertwine links between their music.  The group has developed an original repertoire that fuses various traditions.

Heavily influenced by Afghan and Indian music, the electro-world of Kabul Workshop was a workshop of musical research where the resulting melodies were a direct expression of the state of mind of their creators; a bridge between their different cultures. Franceso Russo and Khaled Arman met in 1998. The intellectual and spiritual complicity that united them nourished their artistic collaboration. Both musicians came from a classical background. Khaled Arman is an Afghan musician and Francesco Russo is from Naples (Italy). Their artistic journey, their curiosity nourished their Kabul Workshop compositions, electronic extension of the musicians’ projects. 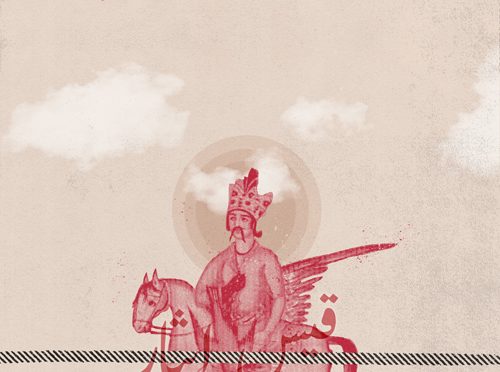 The combination of rabab with drums and chamber music instruments has a feel that reminds me of some of the finest progressive rock bands that incorporated folk and classical music.

The Ghost You Love Most features cover artwork by Safwat Saleem. It is masterfully-orchestrated album by Qais Essar that takes the rabab into exciting new directions.

Buy the digital version of The Ghost You Love Most or the CD from qaisessar.com/album/the-ghost-you-love-most

Afghan rubab virtuoso Homayun Sakhi is set to perform on Friday, April 27, 2018 at Roulette in Brooklyn. The concert is part of the A World in Trance festival.

Homayun Sakhi has established an international reputation as the outstanding Afghan rubab player of his generation. A master of the rubab, a skin-faced lute that is revered as the national instrument of Afghanistan, he performs the music of Afghanistan, which is rich in traditions that span the Middle East, Central Asia and North India. He will be joined by Nitin Mitta, one of the most sought after tabla players of his generation.

Khaled Arman is a musician, composer and improviser. He has dual musical training. On one side he has studied the Afghan and Indian tradition. On the other hand, he has also studied Western music.

Arman won the first prize at the Radio France International guitar Contest in Paris. He composes both acoustic and electronic pieces. For Kabul Workshop, the band he founded, together with Italian keyboardist Francesco Russo, he has developed the technique to play the rubab at a high level of perfection. The instrumentalist plays the rubab with a bow, as it used to be played.

Homayun Sakhi is an outstanding Afghan rubab player, now living in Fremont, California, the American city with the largest concentration of Afghans.

Homayun Sakhi was was born in Kabul in 1976. In Kabul he studied the rubab under his father, Ghulam Sakhi (heir to a musical lineage that began in the 1860s) in the traditional form of apprenticeship known as ustad-shagird.

In 1992, Homayun’s family moved to Peshawar, Pakistan, a refuge for many Afghans from the chaos that enveloped their country following the 1979 Soviet invasion. The unofficial headquarters of Afghanistan’s emigrant music community there was Khalil House, an apartment building where thirty or more bands established offices.

After the fall of the Taliban in 2001, many Afghan musicians in Peshawar returned to Kabul, but Homayun emigrated to the United States, settling in Fremont, California.

Homayun quickly established himself as a leader of the local musical community in Fremont. He opened a school to teach Afghan music to children, recorded compact discs of popular Afghan songs, and became a sought-after performer, appearing together with Toryalai Hashimi, a tabla player and well-known exponent of Afghan music who had also grown up in Kabul. But while continuing his community activities, Homayun devotes as much as eight hours a day to practicing the rubab.

His Music of Central Asia Vol. 3: Art of the Afghan Rubab album includes tabla player Taryalai Hashimi. The CD version contains a 32-page color booklet with photos along with a DVD featuring an introduction to the Music of Central Asia series, a 24-minute film, interactive glossary, and map.

Rainbow, part of the same series, is a totally different concept. Here, Homayun Sakhi collaborates with the Kronos Quartet and the Alim Qasimov Ensemble.

He has composed for the Kronos Quartet and the Berlin Philharmonic Orchestra, and appeared at prestigious venues and festivals, including Carnegie Hall, Paris’s Theatre de la Ville, the Smithsonian Folklife Festival, and the Fes Festival of World Sacred Music.

Born in Kabul (Afghanistan), Daud Khan learned how to play the rubab (an Afghan string instrument) with master Ustad Muhammad Umar. After becoming a skillful rubab player, Daud Khan traveled to India to learn sarod (an instrument related to the rubab) with the great sarod master, Amjad Khan.

Daud Khan is currently the director of the Academy of Indian Music in Berlin, Germany. During his shows, he usually performs music with deep Afghan and Middle Eastern influences, accompanied by a tabla player.

Since 2004 Daud Khan is performing with the Ensemble Radio Kabul in concerts and festivals all over Europe and abroad.

The voice of the mystics

The soul of sound

A world of string and sound

Aziz Herawi is an expatriate Afghani currently living in California. He comes from a wealthy religious family in Herat. His father did not approve of playing music and consequently Aziz learned to play the dutar (a long-necked lute) as a boy in secret. He embodies many of the characteristics of the shauqi, or amateur musician: he is self-taught, has a passionate interest in music, and does not wish to make a living exclusively from his music.

Herawi was well known in Herat as an enthusiastic performer and as a generous patron of other musicians. Herat’s music is a blend of Persian and Hindustani instruments and styles. Herawi’s dutar and rubab playing is very typical of the Herat style. The pieces have the varied rhythms of the Hindustani raga forms, but are fairly short (3 to 5 minutes each) and more intense than most Hindustani music. Herawi often builds up to very fast tempos, and employs a wide range of dynamics, sometimes playing very quietly for dramatic effect.

Aziz Herawi became a refugee from the war in Afghanistan, moving first to Pakistan and later to the United States of America.

Ustad Mohammad Omar, one of Afghanistan’s finest rabab players, became the first Afghan musician to teach in the United States of America when he arrived at the University of Washington in Seattle in 1974.

In 1979, Ustad Mohammad Omar appeared as a guest on the album Embryo’s Reise by German jazz-rock and world music band Embryo.

In 2002, Smithsonian Folkways released an album titled Ustad Mohammad Omar, Virtuoso from Afghanistan. This CD documents his only public performance in the United States of America.

Playing his rabab, a short-necked lute that is plucked with a plectrum called a shahbaz, and accompanied on the tabla by a young Zakir Hussain, Mohammad Omar shared Afghan traditional music with the West in this memorable and important concert. Hussain and Omar had never met before that day, nor did they speak a common language, but their musical voices intertwine magically on this classic recording. The music is steeped in the traditions of Afghanistan and that country’s own relationship to Indian and Pakistani musical influences, but this virtuoso performance stands alone as a triumph of Eastern music.

Ustad Mohammad Omar passed away in 1980.