Ángel “Cachete” Maldonado, a renowned percussionist and co-founder of the celebrated Afro-Puerto Rican Batacumbele ensemble died on January 10, 2020. He was 68 years old.

Maldonado was born in Barrio Obrero, Santurce, and became a leading Afro-Caribbean percussionist. 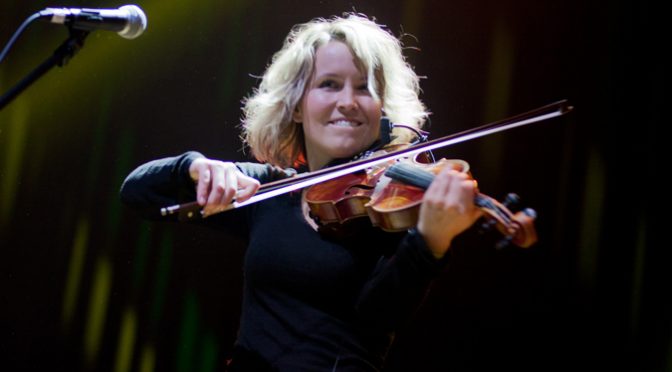 Czech Violinist and winner of three Anděl Awards, Jitka Šuranská passed away on Monday, October 28, 2019 after a severe cancer illness.

Jitka Šuranská had been actively involved in music since her childhood. She played traditional folk music for ten years with the Dulcimer ensemble of Stanislav Gabriel. Jitka also devoted herself to classical music. She was a member of the Bohuslav Martinů Philharmonic in Zlín.

The meeting with musician and journalist Jiří Plock was essential for her. Together they recorded “Písňobraní” (i.e. Song-gathering) for which they won the Anděl Award in 2005. In 2012, Jitka Šuranská moved on. She bought a Loop Station and started playing and singing solo. This was followed by cooperation with the Slovak trio Pacora, producer Stan Palúch, and in 2013 the first solo album “Nězachoď slunečko”. She received the second Anděl Award in the World Music category for her album.

In 2014 she fulfilled her dream of having her own band. “What more could I have wished for – the Jitka Šuranská Trio,” she said on her website. In 2016, the debut album of the trio called Divé husy (i.e. Wild Geese) was released. In the same year, she began to cooperate with the Women’s Choir of Kudlovice.

She won the last Anděl Award in 2017 for a music project with the eponymous album name Beránci a vlci (i.e. Lambs and Wolves). This happened in the Folk category. Together with her trio, it was awarded to the Women’s Choir of Kudlovice, the Association of Independent Jazz Artists and the Beskydy band RukyNaDudy.

Czech record label Indiescope stated in a press release: “The passing of the energetic musician, who was breaking the borders of folk music and pushed it into new spheres, is an irreplaceable loss not only for the Moravian music scene.”

Ray Santos was born December 28, 1928 in New York City to Puerto Rican parents. Known as “El Maestro” by his fans and fellow musicians, was a leading expert on Afro-Caribbean music. His Juilliard School training allowed him to cross borders with success, honesty and class. Over his 90 years, Santos became a legend in the world of Latin music and left a deep-rooted mark with his artistry. The Latin Recording Academy honored him with 2011 Board of Trustees’ Award.

Known for the layered complexity of his arrangements, for more than 50 years, Santos performed, composed, and arranged for leading Latin music orchestras, including the legendary ensembles of Tito Puente, Tito Rodríguez, Mario Bauzá, and Machito.  He was also essential in albums recorded by Linda Ronstadt, Eddie Palmieri and Paquito D’Rivera, to name a few. In addition, he was a respected professor of music at the City College of New York, where he taught for nearly 30 years and directed the college’s Latin band.

“We are forever thankful to the amazing gentleman Mr. Ray Santos, who was also committed to music education, fostering the next generation of music makers,” said Gabriel Abaroa Jr., President/CEO of The Latin Recording Academy. “His legacy lives on in his music and the hearts of our music community, forever inspired by his commitment and remarkable craft.  Our hearts go to his family during this difficult time.”

Ray Santos received an honorary doctorate of music on March 20, 2016.

ARC Music announced today that Egyptian percussionist and composer Hossam Ramzy passed away on Tuesday, September 10th September 2019. He was 65. Hossam was undergoing treatment for a heart condition in Brazil, though the condition was very advanced.

Throughout the last three decades, Hossam traveled the world, educating in the art of true Egyptian dance. His concepts of dance and rhythm helped tens-of-thousands of dancers and percussionists perfect their techniques. During this time, he also found the time to release over thirty albums of Egyptian dance and world music, and produce countless more for artists from all around the world.

Johnny Clegg, a singer-songwriter and guitarist known for mixing Zulu music with Western influences, died on July 16, 2019 at his family home in Johannesburg, South Africa.

Ms Beauty Dlulane, Chairperson of the the Portfolio Committee on Sports, Arts and Culture at the South African Parliament stated: “Not too many people would have taken the stance Johnny took at the height of racial divisions in the country. He identified with the popular struggle for the emancipation of black people and with the values of a free society.”

“He also made an immeasurable contribution in the arts. We will certainly miss ‘the white Zulu’. The committee wishes that his spirit will live long among many in society,” Ms Dlulane said.

“Johnny leaves deep foot prints in the hearts of every person that considers him/herself to be an African,” said Roddy Quin, Manager, friend and family spokesman. “He showed us what it was to assimilate to and embrace other cultures without losing your identity. An anthropologist that used his music to speak to every person. With his unique style of music he traversed cultural barriers like few others. In many of us he awakened awareness. “

Johnny Clegg’s family asked that donations be made to Adopt a Future Foundation instead of sending or laying flowers.

Brazilian singer and vocalist João Gilberto died on Saturday, July 6th, 2019. Gilberto was one of the creators of bossa nova, a new musical genre that fused samba and jazz.

One of his biggest international hits was Garota de Ipanema (The Girl from Ipanema), released in 1963 and covered numerous times by artists such as Frank Sinatra, Ella Fitzgerald, Kenny G, Amy Winehouse, etc.

“Two-time GRAMMY Award winner João Gilberto was a multi-talented singer, songwriter, and guitarist,” said
Neil Portnow, President/CEO of the Recording Academy and Gabriel Abaroa Jr., President/CEO of The Latin Recording Academy in a joint statement. “An architect of bossa nova music in his native Brazil, João’s innovative style and master musicianship helped turn the genre into a worldwide phenomenon. Maintaining an impressive career spanning several decades, he earned six GRAMMY nominations between 1964-2000, and, along with his musical partner Stan Getz, he took home the coveted Album Of The Year award for 1964’s breakthrough album Getz/Gilberto. That milestone recording and his classic “Chega De Saudade” have been inducted into the GRAMMY Hall Of Fame. João will be missed, but his legacy will live on forever. Our sincerest condolences go out to his family, friends, and creative collaborators during this difficult time.”

“Malcolm John Rebennack Jr.—known to most as Dr. John—was a radiant singer, songwriter, and pianist whose career in music made him a New Orleans icon and Rock and Roll Hall of Famer,” said Neil Portnow, President/CEO of the Recording Academy. “He earned 15 GRAMMY nominations and six GRAMMY Awards throughout his celebrated career, including Best Blues Album for his critically acclaimed 2012 album, Locked Down. His funky approach to blending musical styles and imaginative persona helped diversify the New Orleans Sound, which was on full display during an energetic performance with the Black Keys at the 55th GRAMMY Awards. This is a great loss for our industry and Dr. John will be deeply missed.”

Ramon Banda was born and grew up in Norwalk, a suburb of Los Angeles, California. He was a well-known timbales master and jazz drummer.  He and his brother, bassist Tony Banda, started out playing as teens with conga maestro Poncho Sanchez.

Ramon performed, recorded and toured with Poncho Sanchez for many years.  He later joined Jose Rizo’s Band Mongorama, a tribute to Mongo Santamaria. He also performed with Joey DeFranceso and Bill Cunliffe. Ramon participated in over 250 recordings, including several Grammy winning albums.

Ramon was also a chekere maker.

“Ramon Banda was a legendary timbalero,” says percussionist and band leader Les Moncada. “I was performing with my Latin Jazz Orchestra and as guests, Ramon on my right, Poncho on timbales in front of us and myself, Les Moncada on timbales. All of us performing and soloing Tito Puente‘s composition ‘Ran Kan Kan’. I can only say competition-wise, Ramon went on timbales from 0 to 100 mph in a second, I was more than amazed.”

Les continues: “He visited me at my home, with the guys, Tony, Poncho, Sal, Papo Rodriguez. My orchestra opened for Poncho on several occasions and Ramon, Poncho, Tony and Sal Carrachiolo, we would perform together.

Ramon and the guys would come as guests with my orchestra.  I did a clinic with Ramon, Poncho and Tony in San Diego, California many moons ago.  He and Poncho and the guys, including David Romero, would frequent my late conguero friend Raul Garcia’s house and stay up all night talking about Latin music.

My son Marco and I would speak to Ramon about gourds and chekeres and I believe Ramon has some chekeres submitted to the Smithsonian Institute.

He used to tune my timbales for me, when he was around and we would talk about how we both idolized timbalero Manny Oquendo.

Ramon told me that the first time he met Manny Oquendo, he kissed his hands out of respect for Manny Oquendo and his timbales playing style.

Ramon Banda will be missed dearly, a maestro for timbales students worldwide for generations to come. He was a young guy in Norwalk, California that had the drive to play drum set and timbales, went on to assist in winning Grammys and performed and recorded with the late Cal Tjader.”

“Beth Carvalho was a Brazilian samba singer, musician, and composer,” said Gabriel Abaroa Jr., President/CEO of the The Latin Recording Academy. “With a career that spanned 50 years filled with multiple acclaimed recordings, Carvalho was known as the “Godmother of Samba” and a historical figure in Brazilian culture.

In 2009 she was recognized with a Latin Recording Academy Lifetime Achievement Award and at the 13th Annual Latin GRAMMY Awards she received a Latin GRAMMY for Best Samba/Pagode Album for Nosso Samba Tá Na Rua.

Carvalho helped bring underrated composers the recognition they deserved, becoming a driving force in the modernization of samba in the ’80s, while preserving its roots. As a philanthropist and activist, she founded various schools to teach samba and used her lyrics to bring awareness of social issues such as poverty and indigenous rights. Our deepest condolences to her family, friends and music lovers during this difficult time.”