Australian audiences were reported to be “spellbound throughout” recent performances by Garden Quartet’s performance of music from their debut self-titled album. Ancient Persian language and melodies are embroidered with threads of trans-global influence – old and new. While the result is born of improvisation, it delivers a complete soundscape, Earthy yet ethereal. Delicate and vibrant.

Since relocating from Iran to Melbourne, front woman Gelareh Pour has ventured beyond her classical training. Collaborating with experimental musicians, her adventurous spirit found a platform to soar. Pour has dabbled in genres from theatrical to Persian post-Rock and metal.

Original compositions accompany emotive poetry. In Iran, women singers cannot perform publically as soloists. In a modern diasporic setting, Pour’s Farsi vocal interpretations scale unexpected heights. On ‘I Am An Ocean’, she sings the words of Nozar Parang: Why stay in dirt with no hope?  On ‘Anxiety Wars’ (lyrics by Houshang Ebtehaj: The small cage door is open but it’s a shame, The wings of my voice are broken.

As an ethnomusicologist, Pour’s instrumental practice preserves a classical tradition. As an interpreter of words, she expresses her own need to be heard on a welcoming platform.

The conversations between instruments and voice follow the improvisational tradition of her musical roots. The interplay of learned structuring and innovation captivates. Joining Pour and O’Dwyer on production, Myles Mumford shares their passion and experience over an array of musical styles. 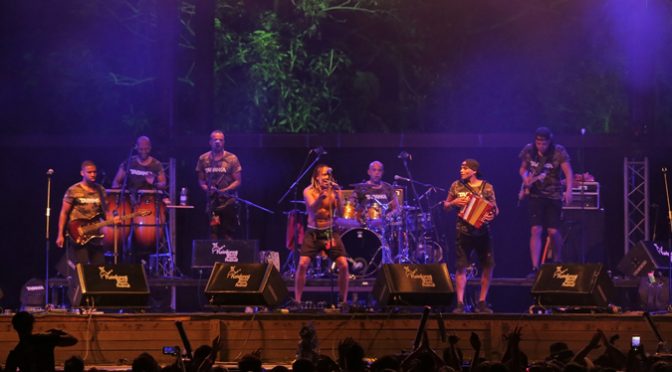 There’s nothing unusual in an upcoming festival being announced as the ‘best ever’. In recent years, the Rainforest World Music Festival (RWMF) has proved to be bigger and better with each edition. Held in the picturesque Sarawak Cultural Village (SCV) in Malaysian Borneo, the global gathering is as innovative as it is unique. In July 2019, festival goers discovered exciting new features within the established format.

Afternoon mini-sessions over the three day event mixed performers from various acts jamming, jigging and harmonizing together in improvised workshops. Themes ranged from frame drums to zithers, bamboo to Bhangra and Bollywood. At one, the resonant sound of blended voices floating from the Bidayuh longhouse beckoned listeners from across the tropical village site. Vocalists Mina Ripia (WAI) and Linzi Backbotte (Mauravann) also showcased their stunning voices at theatre shows, each telling stories from their New Zealand Maori and Mauritian heritages respectively.

Fronting their groups, both charismatic performers provided laughs with their relaxed banter. They also revealed raw emotion on stage during the intimate concerts, connecting with audiences. Introducing a song dedicated to a recently passed friend, Ripia – blinking away tears – was spontaneously comforted by her 11 year old son (cajon, percussion and rap vocals). The young band member touched the crowd with this quiet and tender act, further indicating an old and wise head on young shoulders.

Backbotte encouraged her audience to clap and sing along to Sega rhythms. But all sat transfixed during one piece dedicated to ancestors after hearing shocking truths of their treatment by those who enslaved them. Sometimes the Arts carry the sole voice of generations past. I’m eternally amazed by what I learn of our planet and its history and the resilience of its people.

The main events are the evening concerts on the outdoor Jungle and Tree stages. With shiny new state-of-the-art equipment courtesy of sponsor Yamaha, the peerless work of the returning sound, stage and lighting team ran seamlessly. Despite forecasts, the weather was idyllic. Record crowds meandered comfortably, from the craft village and food stalls to the well-attended wellness program.

Event partners Rainforest Fringe (with exhibitions in Kuching) and What About Kuching (WAK) expanded the festivities on offer. WAK hosted beachfront live music and stalls at Damai Central, a short stroll between Damai Beach Resort and the festival site. The Damai sunsets were also the biggest and best you could wish for.

The traditional RWMF finale brought all performers together onstage. Bouncing, dancing, singing and waving to the exultant fans, they stayed on stage to take group selfies with new friends and potential collaborators.

Members of Spirit of the Hornbill (Indonesia) were the last to disperse into the balmy shadows of the night. Like so many on stage and off, they were reluctant to leave the warm embrace of the Rainforest family.

Alongside the requisite Celtic, Latin and Islander music represented at most world music events, I discovered rhythms and melodies I’d never heard before. Since my first ‘Rainforest’ a decade ago, Sarawak’s iconic ‘lute’ the sapé has moved to the forefront of the event’s soundscape. It’s heartening to find ancient cultural forms rediscovered and relished by young players and audiences.

More about the festival: rwmf.net

When you think of Scotland, does the drone of bagpipes start playing in your mind? Does Hawaii spark strains of a ukulele-laced ‘Over The Rainbow’? Or perhaps Bugs Bunny singing ‘Aloha Oe’? At the mere mention of Sarawak, I hear the soothing lilt of the sapé. Just a decade ago, the sound of Borneo was in danger of being lost to history. As aging masters passed on, young musicians showed little interest in the instrument. The long carved ‘lute’ and other traditional instruments were considered ‘boring and un-cool’.

Meldrick Bob from Kuching band At Adau recalls, “When we were younger, we thought the same thing. When I went to middle school, my father said, ‘You must learn sapé. Who else will play?’ The sapé [made from a single bole of wood] featured at the first Rainforest World Music Festival I attended. I was then also inspired by rhythms from Africa and Latin America. That’s why I play drum with a mix. There’s influence of salsa, cha-cha and songo on our new album Oba.”

Bob represents the Iban and Bidayuh tribes of the 20+ across Sarawak. Others in the group descend from the Orang Ulu and Kenyah. “We also play instruments from the Melanau beat, the Penan… We plant it into modern elements. The old people say, ‘It’s OK, but you should know your roots first’. Back in the day, if we followed the taboo, it’s not good. But for now we really want to keep it alive – to create our own sapé scale and tune which attracts more youngsters. They’re surprised that modern music can be played with traditional instruments.”

At Adau create a unique style of what they call ‘experimental world music.’ They accompany 4 or 6 stringed sapé with perutong (a traditional bamboo zither), Bidayuh bass drum, jatong utang (wooden xylophone), Kededek (mouth harp), and nose flute. They incorporate the sound of the rainforest and rivers with frame and Hang drum, Cajon, guitars and dance. Their compositions range from the hypnotic to rock fusion. Predominantly instrumental, their opening track on Oba features majestic vocals inspired by traditional ceremonial chants.

and Luke Wrender David on 4 String and 3 String Sapé and guitar. “Ezra is very, very good at sapé. Lian in traditional dancing (Ngajat). The percussion is from Sarawak. I’m from a rock band. This idea came from Lian’s father (sapé master Mathew Ngau Jau). So we collected all the ideas from out of the box then put them in a blender. Then accidentally, magically, it’s very good. We realised we have something – not only traditional, strong to our roots, but something very fresh. In these times, we want to say, ‘Even the instruments unite so why don’t the people?’ We are from different races and backgrounds but come together to form a band. Boom.’ When we play, we see different races in front of us but they have the same feeling and follow the songs. We love to see that.”

In recent years, the sapé in particular has become more prominent across the local music scene in its many shapes and forms. Women players like Alena Murang are now accepted with large ensembles keeping the song of Sarawak and neighboring regions alive.

An independent band, At Adau formed in 2014. Their profile rose steadily with 2015 debut album Journey. Gigs on RWMF’s small stages progressed to thunderous ovations for their main stage performance in 2018. Their album features on Malaysia Airline’s inflight music selection. International touring, industry awards and their own studio in Kuching see them now a mainstay of Sarawak’s cultural profile. They’re on the bill again for the global gathering this July. “Our costumes and necklaces, feathers, traditional tattoos… includes us as indigenous people. On stage we teach how the Iban or Bidayuh make a toast.” They did so on a teaching trip to South Korea. “If you go to Korea you might meet people doing the Borneo toast ‘OooohHaaa!’ because it’s fun and loud.”

Ezra Tekola makes his own sapé and nose flute. He learnt from an elder who he met at the Rainforest World Music Festival. Tekola explains, “Uncle Loyuh was the only one left to play and make the local nose flute. Another instrument showcased by the band is the very rare kededeh made of bamboo and gourd. It’s modified to sound more bass, so it sounds like a goose!” he laughs. “We were quite surprised to see in the Kuching museum that the Iban tribe has its own two-stringed violin. We wondered how it sounds and how to make it alive again.”

The musicians say some traditional stories tell strange, ‘very creepy’ tales about the spirits. A lullaby piece on Oba Story depicts a scene following a good hunting trip. “The people gather in the longhouse, have a feast, go all lazy then play.” Tuak (rice wine) flows freely as the toast rings out across the forests. OooohHaaa!

More about the band and discography: At Adau