Portuguese singer Misia is known for her superb vocals and unconventional approach to fado, exerting artistic freedom. This is evident as soon as she listen to the first track, “Rosa Negra no Meu Peito II” on her new album Pura Vida (Banda Sonora).  Misia delivers a fado exclusively with voice and bass clarinet, a rare combination in the genre.

Throughout the album, the focus is on the vocals intertwined with virtuosic instrumental performances. On track 2, “Ouso Dizer,” Misia continues with her rebel approach by using Portuguese guitar and an electric guitar solo.

Although the first two songs are in Portuguese, she switches over to Spanish on track 3, “Corazón y Hueso.”  This is a deeply passionate tango piece, with a mix of vocals, bandoneon, piano and guitar. She is joined by famed Argentine singer Melingo, a former rocker turned tango singer.

On “Ausência” she combines fado vocals with soaring electric guitar, clarinet and violin.

On “Pasión”, Misia returns to Spanish language with another tango, although this time she adds electric guitar to the familiar tango sounds. Portuguese fado singer Ricardo Ribeiro joins Misia, singing in Spanish as well.

Back to fado on Track 12, “Santo e Senha” featuring piano, violin and Portuguese guitar with dreamlike sounds underneath it all.

A third tango song in Spanish is included in Pura Vida. “Prelúdio para el Año 3001” is a recreation of a song by Astor Piazzolla, a contemporary tango with piano, bandoneon and clarinet.

The album ends with an outstanding classic fado titled that winds up with a final drone.

Cristiana Águas is one of the most influential voices of the new fado generation. A singer with an international career, she studied chant and vocal technique, as well as Portuguese guitar and accordion.

She won several prizes in different Fado contests throughout Portugal and she provided the voice for the character representing the iconic Fado singer Amália Rodrigues (as a 20-year old) in the film Amália Rodrigues, produced by Valentim de Carvalho, exhibited in 24 countries and festivals like Cannes Festival and Festival Do Rio, Rio de Janeiro.

She appeared in most well-known Fado houses in Lisbon, like Luso, Faia, Adega Machado and regularly sings in Clube de Fado in Lisbon. She has performed in different countries such as Brazil, Netherlands, United Kingdom, France and Russia. She was also the host of the Japanese TV show JIN in Portugal, promoting Portuguese culture in Japan. 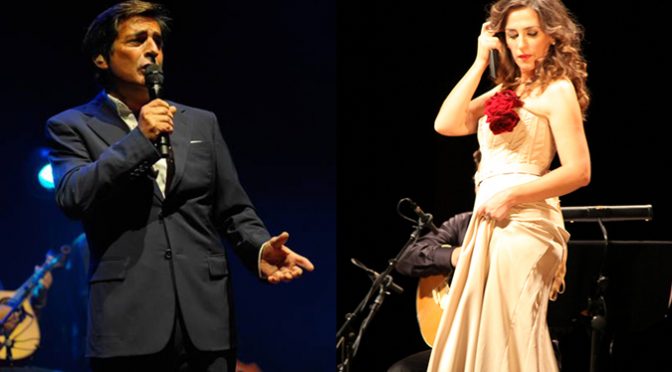 This year’s festival will take place May 1 – 11. It includes daytime and evening shows, all free and open to the public, from May 1 to 4 at Brookfield Place, a state-of-the-art venue for cultural programming in New York City. The following weekend, Fado Festival NY&NJ travels to the historical center of fado in the United States, Newark, New Jersey,  on May 11 for a walking tour of the Ironbound district.

The festival opens with two free lunchtime concerts at Brookfield Place by Portuguese singer Sofia Ribeiro on May 1 and 2, both at 12:00pm. An award-winning performer, Ribeiro’s latest recording, Mar Sonoro, embraces fado, jazz and contemporary Brazilian music. Ribeiro has performed extensively throughout the U.S. and Europe, and has released a total of eight studio albums.

The festival’s free evening concerts begin at the Winter Garden at Brookfield Place with a double bill featuring Camané and Ana Sofia Varela on May 3 at 7:30pm

The second evening double bill at Brookfield Place features Hélder Moutinho and Maria Emília on May 4 at 7:30pm, as well as a pre-concert talk at 6:00pm with fado historian and scholar Dr. Lila Ellen Gray.

All singers on both nights will be backed up by a trio of dynamic musicians: André Dias (Portuguese guitar), André Ramos (classical guitar) and Rodrigo Serrão (acoustic bass guitar).

The festival concludes on May 11 with a walking tour and live fado performance in the Ironbound neighborhood of Newark, New Jersey, home to a thriving fado community of its own. The Ironbound—so named for the bustling railroad system that encircles it—is an iconic Portuguese neighborhood known for its European feel and for the hundreds of restaurants, cafes, bars and stores within it.

The tour will visit local establishments furnishing Portuguese wine, food and pastries, as well as important cultural attractions. The tour’s final stop will be the Sport Club Português, a leading cultural institution located in the heart of the Ironbound, for refreshments at 6:00pm and an intimate fado concert at 7:00 pm. The tour departs Sport Club Português (55 Prospect Street, a 5-minute walk from Penn Station Newark) at 4:30 pm.

Maria Emília was born in São Paulo, Brazil, but always had a strong connection to fado. Her Portuguese grandfather introduced fado to Maria Emília and her father.

She moved from Brazil to Portugal at a young age, and began singing fado early at Taberna do Ganso and other well-known venues in the Minho region.

Althoug she returned to Brazil and sang in the Alfama dos Marinheiros, Maria Emília had a longing for Portugal and fado. She returned to Portugal and began her career as fadista. She performed at the most iconic fado houses and toured Brazil, Spain, Switzerland and Belgium.

Throughout her career, she has demonstrated a steadfast devotion not only to the music’s deepest traditions but also to its expressive possibilities. Her album Casa de Fado features bittersweet fados such as “Perfeito Pecado” and “Sou um Fado desta Idade”, as well as emotive classics such as “Um dia cheguei-me a ti” and “Agora.”

She was a finalist in RTP’s contest “Selecção Nacional” and later performed in Festival RTP da Canção in 1995.

In 1997, Carlos Zel invited her to perform at Lisbon’s fado houses. She began a collaboration with Mário Pacheco and was a regular act at his Fado club.

In 1999 she participated in a show in New York put together by João Braga and that would culminate in the recording of two songs for the CD “A Guitarra e Outras Mulheres” (One hundred Years of Fado).

Ana Sofia rose to prominence in the early 2000s as one of a small group of young and dynamic new fadistas, initiating a period of vibrancy and innovation that continues to the present.

Her first release was a single with two songs: “Quem canta na minha voz”, with lyrics by João Monge and music by Rui Veloso, and “Rosa Nocturna” by Vasco Graça Moura and Mário Pacheco.

In 2006, she met José Peixoto and Fernando Júdice who invited her to participate in the Sal project.

Infinito Presente (2015), the product of an extended collaboration with the writer José Maria Branco, includes lyrics and arrangements that are deceptively simple. The songs express the mysterious emotion that the Portuguese claim as uniquely and exclusively theirs: saudade, which is at once the happiness that brings sadness, and the sadness that brings happiness.

On Camané’s 2017 album, Canta Marceneiro , he revisits the repertory of Alfredo Marceneiro, an early 20th century fado singer who, though only moderately competent as a technician, completely changed fado’s possibilities for artistic expression through unrestrained inventiveness and wit. Camané’s Canta Marceneiro is filled with mischievous stories that reveal the common cares and fears in all of us through the lives of astute waitresses, drunken painters, and kings’ courtiers.

The album was produced by Guilherme Banza and Tozé Brito. The single “Fragilidade” is available on video:

Fado icon Mariza is returning to the United States and Canada for an extensive North American tour this spring. She will be performing songs from her latest album, “Mariza,” inviting listeners into the intensity and intimacy of fado.

“For me, the most important part of my work is to make good music,” says Mariza. “And for that, I look for good producers, musicians, composers and lyricists,” she remarks. “The transparency of my music means I sing my own truth.”

The self-titled seventh album, Mariza, highlights new facets to her voice and her creativity, tackling songs that speak to the nuance of experience. “After almost 20 years of recording, my voice gained some maturity with all the songs that I sung so far,” says Mariza. “On this record, the lyrics I chose are also very mature. They convey histories of life, emotions from the soul.”

She also wrote her own lyrics. “For the first time I was able to sing a lyric written by me. It’s about an impossible love story,” she explains. “I discovered over the years that we all look for love. In many shapes and forms, that’s the truth, the truth of life for all human beings.”

Deolinda formed in 2006, inspired by Mariza, the Portuguese fado star who is renowned the world over. With a theatrical bent to much of their work Deolinda’s Ana Bachalau (meaning salted cod) recalls bringing her feminine character to life ‘She stands for days listening to records her grandmother left her and watching through the lace curtains at neighbors.’

The songs they write are often vehicles for comments on Portuguese culture and lifestyle and in recent years they have had their track ‘Movimento perpetuo Associativo’ used for political gain at party conferences (a fact the band smile wryly at considering the track took aim at national identity).

Marta Pereira da Costa started playing the piano at the age of 4, later at 8 learned the classical guitar and at 18 began to study the Portuguese Guitar under the tutelage of Carlos Gonçalves, one of Amália Rodrigues’ most important guitar players.

Marta has performed with some of the true giants of Portuguese music, including Camané, Mário Pacheco, Dulce Pontes, and Mariza, as well as Afro-Atlantic legends such as Cameroon’s Richard Bona and Cape Verde’s Tito Paris.

Marta’s self-titled debut album was released by Warner Music in 2016, containing 13 tracks that mixed original compositions with interpretations showcasing contemporary Portuguese composers; instrumental tracks with guest vocalists such as Dulce Pontes, and Rui Veloso, and fado tradition with jazz improvisation and instruments and influences from around the world. One of Marta’s key collaborators on this album was GRAMMY Award-winning Cameroonian bassist Richard Bona, who helped bring Lisbon’s simmering Afro-Atlantic vibes to the fore on “Encontro”.