The year 2020 will mark 100 years since the birth of groundbreaking Indian musician, composer, educator and sitar master Ravi Shankar. Shankar’s association with Southbank Centre in London (UK) started with his first performance in Royal Festival Hall in 1958. Shankar formed a lifelong relationship with the venue, including a number of performances and important premieres over the years. To celebrate his remarkable life and legacy, Southbank Centre will present Shankar 100, a special program of concerts and projects throughout his centenary year, developed in consultation with his wife Sukanya and daughter Anoushka Shankar.

Gala concert on April 7, 2020, the actual centenary of Ravi Shankar’s birth, with a star-studded line-up of family and friends including his daughters Anoushka Shankar and Norah Jones, Nitin Sawhney and Olivia Harrison;

London Philharmonic Orchestra performs Ravi Shankar’s final work, the opera Sukanya in January 2020, and his only Symphony in April 2020;

Sitarist and composer Anoushka Shankar features as a Southbank Centre Associate Artist throughout the 2019/20 season;

A specially-commissioned film to be displayed in Royal Festival Hall’s public spaces and online, featuring archive footage and interviews with contemporary artists who have been influenced by Ravi Shankar’s work;

Plus more programming to be announced.

Sukanya Shankar commented: “The centenary celebrations for my husband by the Southbank Centre will bring back some of the magic I have experienced at all the concerts of this amazing musician!”

Anoushka Shankar stated: “I feel deeply grateful to be able to begin celebrations of my late father’s centenary year with a series of special events at London’s Southbank Centre, before we continue the celebrations in various cities worldwide. It feels ambitious to the point of being unrealistic, to somehow put together anything that can fully showcase all the varied aspects of his incredible career, creativity, musicianship and humanity. However with the multiplicity of events that Southbank Centre is putting on, we may stand a chance!”

Akram Khan noted: “Pandit-Ji is one of the most iconic artists to have come out of India, and one that has truly inspired many generations of music and dance lovers all around the world.”

This double CD showcases some of Pandit Ravi Shankar’s international prowess. The first CD has Japanese-Indian collaborative tracks featuring Pandit Ravi Shankar on sitar and Ustad Alla Rakha on tabla, accompanied by Japanese musicians Susumu Miyashita and Hozan Yamamoto on flute and string instruments. Our pick on this CD is the energetic track, Rokudan.

The second CD is more traditional, with Raaga Jogeshwari and Raaga Hameer. In sum, a fine listen for an afternoon of relaxation.

Legendary virtuoso sitarist, composer, teacher and writer, Ravi Shankar was born April 7, 1920 in Varanasi, India. He was renowned throughout the world for his pioneering work in bringing Indian music to the West. He was a cultural influence in the West for several decades as India’s most recognized and esteemed musical ambassador. The youngest son of a Bengali family, he grew up in Varanasi (Benares), the holiest of Indian cities.

At a young age he accompanied his elder brother, Uday Shankar, with his company of dancers and musicians to Paris where he attended school. He spent several years in the West absorbing different kinds of music but returned to India in 1938 where he began his career in his native India. He combined his concert performances with his work for All India Radio (1949-56) where he established the National Chamber Orchestra. As word of his virtuosity spread throughout India, then Europe, Asia and the United States, Shankar embarked on one of the most extraordinary careers in the history of contemporary music.

Ravi Shankar was a prolific composer and in addition to his numerous ragas and talas, he wrote for musicians from the East and West including Menuhin, Jean-Pierre Rampal and Japanese artists. Among his works are two Concertos for Sitar and Orchestra, the first commissioned by the London Symphony Orchestra and premiered under Andre Previn.

In 1980 he was commissioned by the New York Philharmonic, under the direction of Zubin Mehta, to compose “Raga-Mala” (A garland of Ragas), which was his second Sitar Concerto. Ravi Shankar also wrote, composed and choreographed the ballet “Ghanashyam,” a work that made history on the British and Indian cultural scenes.

He composed extensively for ballets and films including Satyajit Ray’s Apu trilogy, which raised film music to a new standard of excellence, and Gandhi, the Academy Award winning classic by Richard Attenborough which won him nominations for both an Oscar and a Grammy Award.

Ravi Shankar was the recipient of many awards and honors including the Presidential Padma Vibhushan Award (1980) and the Award of Deshikottam, given by Vishawa Bharati and presented in December 1982 by the then Prime Minister, the late Mrs. Indira Gandhi. He is an honorary member of the American Academy of the Arts and Letters and recipient of twelve doctorates.

In 1986 he became a member of the Rajya Sabha, India’s Upper House of Parliament. He was a Fellow of the Sangeet Natak Academy and Founder President of The Research Institute for Music and the Performing Arts.

In 1996 Angel Records released In Celebration, a lavishly documented 4-CD retrospective of his greatest recordings, in honor of his 75th birthday. Angel/EMI is continuing to release many of Mr. Shankar’s albums previously unavailable on CD.

In 2004, Ken Hunt, Pandit Ravi Shankar’s approved biographer, a full-time freelance writer, broadcaster and translator specializing in music, compiled The Rough Guide To Ravi Shankar. The album is an excellent introduction to the music of the most famous Indian alive.

Called the “Godfather of World Music” by George Harrison, Ravi Shankar was also given the title “Global Ambassador” by the World Economic Forum. He continued to tour each season all over the world dividing his time between India and the USA with regular visits to Europe and the Far East. He was the author of three books My Music, My Life (in English), Rag Anurag (in Bengali) and Raga Mala (English) – the latest of which is an autobiography that was released in Fall 1999.

Perhaps no other greater tribute can be paid to this remarkable musician than the words of his colleague, Yehudi Menuhin, “Ravi Shankar has brought me a precious gift and through him I have added a new dimension to my experience of music. To me, his genius and his humanity can only be compared to that of Mozart’s.”

The Rough Guide To Ravi Shankar was released in June 2018. The anthology was compiled by Ken Hunt, Pandit Ravi Shankar’s approved biographer and a specialist in Indian classical music. This Rough Guide followed Ravi Shankar’s rise to global fame and included some of his most memorable performances of six different ragas. 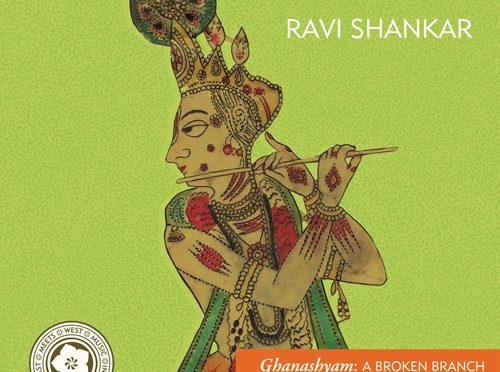 Ghanashyam – A Broken Branch is a fascinating folk musical theater piece by the great musician and composer Ravi Shankar. It was commissioned by the Birmingham Touring Opera Company.

The original album was released in 1994 as a 60-minute CD that left out part of Shankar’s full composition. This new edition includes the musical work in its entirety, with an additional 20 minutes.

The album contain 18 tracks, ranging from short musical vignettes to lengthier pieces. Ghanashyam – A Broken Branch features a wide range of Indian musical instruments, ranging from the sitar, sarod and veena to various percussion instruments. Even though there is some synthesizer work, most of the album showcases remarkable acoustic instruments and vocal work that brilliantly incorporates Indian and Western elements.

Ghanashyam – A Broken Branch is an outstanding original work by the late Ravi Shankar that illustrates the versatility of ancient Indian musical instruments in a contemporary context. 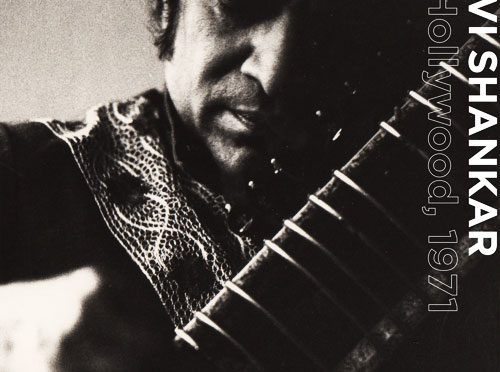 Like doling out single pieces of candy to a greedy child, the world music community is treated to another precious goody from the audio archives amassed over the years by the revered Ravi Shankar. On tap this year is the double CD set Ravi Shankar In Hollywood, set to hit the music marketplace on September 30th on the East Meets West Music label, although pre-orders are available.

I imagine since his death in December of 2012, there’s been a bum’s rush to sift through the collection of recorded music by the famed sitarist to scrounge out all the recordings that were passed over for release. It was bound to happen.

The East Meets West Music label has released its own collected tracks on Living Room Sessions Part 2 (2013) with Tanmoy Bose, Kenji Ota and Barry Phillips, Nine Decades – Vol. 4 – A Night at St. John the Divine (2014) and Ravi & Anoushka Shankar Live in Bangalore (2015) in the form of a two CD set and DVD. With so many releases it’s like the master never left.

Ravi Shankar in Hollywood stands out from some of the other releases in that it was recorded in 1972 in Mr. Shankar’s home on Highland Avenue as a private concert for invited guests. It was a rare morning concert with the likes of George Harrison in attendance. It was also the impetus for the Concert for Bangladesh intended to benefit those suffering in the wake of Cyclone Bhola in East Pakistan, those areas that would become Bangladesh. The recording of Ravi Shankar in Hollywood is precious indeed, not only for the concern Mr. Shankar expressed for those suffering to just the right ears of those with the means to do something, but also the elegant intimacy and brilliance of the recording.

Sukanva Shankar, Mr. Shankar’s widow offers her comments for the liner notes and best sums up the influence of her late husband’s music, “What is core to the raga is its Prana or life and its power to be heard and to be propagated, to instill its emotional message in the heart of as many musicians and listeners as possible. Time will tell the validity of a new raga creation, by its acceptance, popularity and longevity. No matter how beautiful the raga, if you are only one who can perform it, it is not considered to of any consequence. Raviji’s ragas can be found in many artist repertoires – that tells you the intensity and emotional effect of his music and his creations.”

Pioneering Producer Chris Blackwell (who helped make an international star of Bob Marley years ago) recently cemented a new partnership between his own Palm Pictures label and Universal Music Enterprises. The resulting collaboration, Palm World Voices, has taken on an ambitious first project- a combination CD and DVD set celebrating the sounds and visions of India. And while such a musically and culturally rich place can hardly be summed up in one neat package, Blackwell and Universal have succeeded in creating something quite stunning here.

Vedic Path (named for the course upon which personal and universal existence move along in a cyclic manner according to Hindu tradition) aims to be both educational and entertaining. To that end, the liner notes are extensive and informational without being stuffy and a detailed illustrated map provided by no less an authority than the National Geographic Society is included.

Not knowing as much as I ought to about India, I found it helpful to bone up with the liner notes and map before moving on to the music. Ah yes, the music- a very strong selection it is, ranging from the traditional stylings of familiar folk like Ravi Shankar to more fusion-minded stuff that brings in non-Indians like Dissidenten and John Wubbenhorst alongside such greats as . R. Rahman, Asha Bhosle and Sheila Chandra.

The DVD includes the same tracks as the CD, only this time with striking visuals of scenic vistas, celebrations on various scales, religious ceremonies, people going about their everyday life and more. A lot of ground is covered, and though it’s clear that no one is looking to ignore the fact that India remains beset by poverty and other ills, this admirable box set triumphs in projecting an uplifting, multifaceted picture of a country with a fascinating past and present that’s reflected in the music and spirit of its people and its influence on the world.