Sinafi was founded by three Greek female musicians who met in Istanbul, Turkey. The trio includes Fotini Kokkala on qanun; Marina Liontou on ud; and Elena Mudiri Hasiotou on vocals and percussion.

The band L’Ham de Foc was iniciated by Efrén López and Mara Aranda in 1998. After composing their first material they were invited by the INJUVE (Institute for Spanish Youth Culture) to participate in the yearly tour through various Spanish cities. The live setup required more musicians so L’Ham de Foc was founded after the band grew up to 7 members.

Shortly after that, the musicians got in contact with the independent label Sonifolk and in August of 1999 the first CD “U” (Sonifolk, 2001) was released. With the help of the new album, the band participated in several important Spanish world music and folk festivals.

After a long tour throughout Spain Efrén López and Mara Aranda continued their musical investigation and moved to Greece for 6 months in order to learn more about traditional Greek music and to meet important musicians. The knowledge obtained during this trip was used in their second album, Cançó de Dona i Home (Sonifolk, 2002).

L’Ham de Foc was one of the leading groups of a new Folk movement in Spain, that works the traditional roots into a new, modern music concept. But L’Ham de Foc’s work is not just a superficial look at its roots. The musician’s intention is to go back to where things originally came from, to learn how to play instruments, techniques and interpretations from first hand. Mediterranean folk music, including their own Valencian music, Greek music and also music from India or Northern Africa, are main influences for L’Ham de Foc. This mixture was responsible for a widespread acceptance of their music.

To understand the group’s work, one needs to know ome things about the special cultural situation of the Valencian region. During the history of the southern Spanish coast, different cultures settled down, imposing their cultural roots. Due to its harbors, southeastern Spain was an important place for trading and the result was a permanent cultural exchange.

Musically spoken, three different zones have the strongest influence: The Arabic countries in the south. The tradition from Aragon and Castille in Spain, France and Italy denominated as the European zone. The central zone that is identified by a fusion of the north and the south. Hereto belong countries and regions like Greece, Andalusia, Yugoslavia, Albania, the Balearic Islands, Malta, Crete, Valencia, etc. These cultures are characterized by melismatic melodies, polyrhythms, double stringed instruments, wind instruments, quarter tone harmonies, and by the presence of the Arabic culture throughout 700 years.

Diego López (Darbuka, Rig, Didjeridu, Bendir, Snare Drum, Cántaro and Tabla) – He started his career as a drummer in various rock, folk and singer-songwriter bands and found his interest more and more in traditional percussion instruments. He studied Indian tabla with Sazed Ul Alam and took part in workshops given by Glen Velez.

Eduardo Navarro (Dulzaina Gralla, Tarota, Baguet, Galician Bagpipe, Bulgarian Bagpipe, Chirimía, Crumhorn, Flute, Violin and Mandolin) – He started playing the laúd (Spanish lute) in traditional music groups and studied violin at the conservatory. Later, at the age of 16, rs he specialized in the Dulzaina reaching a master level. He was founder of traditional Valencian and Mediterranean groups like Llisa folk, Urbália Rurana, Tres Fan Ball and la Banda del Agredolç. He was also engaged in the cultural magazine “La Canya”. He later worked with the group Capella de Ministrers playing early music and was a permanent member of L’Ham de Foc.

Efrén López (Ud, Zanfona, Dulcimer, Bouzouki, Saz, Lauto, Trompa Marina, Gümbüs and Archilaúd) – He was one of the founders of L’Ham de Foc together with Mara Aranda. After playing the guitar in several projects he started to get into traditional music. As a session musician he recorded for more than 40 projects of different music styles. He’s switching now from guitar to traditional Mediterranean and antique instruments like double stringed instruments. With these instruments he recorded music for ads, documentaries and short movies. He studied the Zanfona with Pascal Leffevre, Maurizio Marttinotti and Nigel Eaton, Indian music with Krisna Mohann Batt, Sazed Ul Alam and Ajo y Chakrabarti and Turkish music with Ross Daly. Now he is sharing his time between L’Ham de Foc and the antique music ensemble Capella de Ministrers, which is touring continuously throughout Spain, Italy, France, Egypt, Croatia, Portugal, etc.

Mara Aranda (Tampura, Percussion, Classical Guitar, Vocals) – Mara was the composer of most of the music of L’Ham de Foc and also responsible for all lyrics. From the age of 16 she became a singer songwriter, fundamentally influenced by roots music and early music. 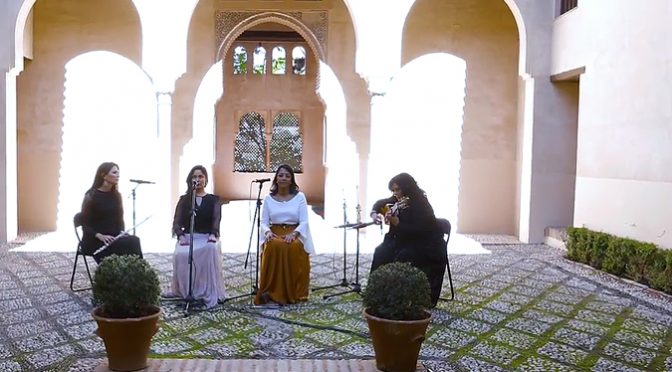 How did the Mujeres Mediterráneas project come about?

Mujeres Mediterráneas is a musical ensemble based on the coexistence of music and cultures, specifically between Flamenco and Arabic Music. It was created in 2015 as a result of the vital encounter of our music on stage. The project arose from a musical encounter where Arab singer Habiba Chaouf coincided with flamenco guitarist Pilar Alonso; a musical and cultural exchange was created that grew and resulted in the current quartet incorporating flutist, Mixtlan Salomón and the then little known flamenco cantaora (singer), Ana Sola.

In the musical universe of Mediterranean women, Middle Eastern and Andalusian rhythms are interwoven between harmonies, flamenco songs, Arabic songs and Sephardic melodies. Thus, they discover and experience a personal musical language that dialogues between East and West in a free and playful way. Enjoying the musicality and diversity of the languages (Berber, Classical Arabic, French Dariya and Spanish). Between the “pinches” of the flamenco guitar, the melodies of the flute, the rhythmic variations of the bendir and flamenco palmas (handclap percussion), the Arabic and flamenco voices move between Morocco, the East and Spain, transporting us to a trip throughout the Mediterranean, remembering the essence that each culture entails.

How did the four members of the group meet?

Habiba and Pilar coincided in a fusion show. This meeting generated a friendship relationship by sharing the customs of their cultures in essays accompanied by the gastronomy of both countries. In each rehearsal the music was present in a natural way and likewise mixed, like a stew that requires different ingredients. The Arabic voice feels accompanied by the flamenco harmonies and rhythms and feels them as their own and the guitar is recreated in the Arabic melismas as “quejíos” (flamenco moans).

Mixtlan, recently arrived from Argentina, with much knowledge of flamenco and Arabic music, joined the group with flamenco singing sung with the flute in what we call the “flautaora”.

Ana, one of the most important cantaoras of her generation, joined later, providing with her vocal strength and her stylistic versatility a very personal vision of the flamenco side.

What are the essential elements of your music?

Who can be cited as the main musical influences of the group?

We are inspired by classical Arabic music and poetry and flamenco in general, giving our “personal touch”. Each of us carries a “backpack” of musical knowledge that, when put together, generates a particular sound.

What musical instruments do you use?

What has been the reaction of the public so far?

The public surprises us with their reaction every time we get on the stage. We are grateful for the coexistence of cultures and the naturalness that characterizes us when we present ourselves in public. We also see that they enjoy female complicity that is not frequent in the current music scene.

How’s the flamenco scene in your area?

Flamenco is very healthy in Granada. Since it was named a World Heritage genre, it is cared for and more powerful. Flamenco reaches every corner of the world and that makes it possible to mix with all cultures, being a very open music.

Have you recorded any albums?

We are currently in the process of recording.

Much of what is broadcast on the radio, internet and movies is pop and hip hop. How do you divulge your music?

We currently do it with music videos on Youtube and our live performances.

Is there any effort on your part to raise awareness of flamenco and the music of the Maghreb?

Both Maghreb and Flamenco music are world-renowned, we take care of making them live together naturally, from the enjoyment of musical diversity and the complicity of common aspects from where they meet.

We like to share our music with all kinds of audiences including children that provides us their natural vision of mixing, from innocence without prejudice.

If you could gather musicians or musical groups to collaborate, who would you call?

We are open to collaborations from both the Flamenco world and the Arab world, as long as their music flows with our style.

Are you preparing any new projects

We are preparing the recording of our first album and a new show which shows the linguistic relationship between Arabic and Flamenco.

Melange is a British multi-ethnic ensemble that combines jazz improvisation with the evocative sounds of North Africa, the Middle East and the Mediterranean. Their latest album Via Maris reflects this fascinating melting pot of musical influences with a fabulous mix of original pieces and recreations of traditional tunes and dances from Turkey, Greece and Iraq.

Cellist Shirley Smart founded Melange after spending 10 years in Jerusalem studying and playing the musics of the region. The ensemble includes musicians from Greece, Spain, Morocco, Iraq, Italy and the UK.

Via Maris is a splendid album where the cello and various other instruments explore the captivating worlds of jazz and global sounds.

Buy the Via Maris digital version

Buy the Via Maris CD