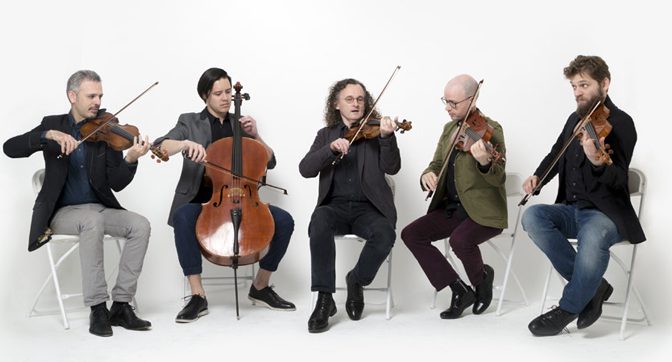 Martin Hayes and Brooklyn Rider – The Butterfly (In A Circle Records, 2019)

The lineup on The Butterfly includes Martin Hayes, Johnny Gandelsman and Colin Jacobsen on violin; Nicholas Cords on viola; and Michael Nicolas on cello.

Born in Ireland, Martin Hayes plays in the slow, lyrical style of his native East County Clare. He grew up playing traditional music with his father, P.J. Hayes, leader of the famed Tulla Ceili Band. The younger fiddler has a great reverence for the old players, “whose music contains the longing and essence that moves you at the level of your soul.” Martin brings the same intensity to his own playing, rendering it unique with passion and intimacy.

Martin frequently performs with guitarist Dennis Cahill, whom he met in Chicago when he first moved to the United States in the 1980s. They formed a jazz/rock/fusion band called Midnight Court, in which they experimented with a variety of new music styles. Eventually, though, they both turned back to their traditional roots, and after recording two acclaimed solo albums, Hayes began a new musical relationship with Cahill. In 1997 they released The Lonesome Touch (Green Linnet).

“Our allegiance is to the spirit of the moment,” says Hayes, “Our primary wish is that the musical experience be one that lifts our spirits and those of the audience.”