Eliades Ochoa was born in a rural area, Songo La Maya, in 1946. When he turned 11 years old, Ochoa began to play in bars and houses of ill repute in Santiago de Cuba, out of necessity. Since he was so young, almost as big as his guitar, that attracted people’s affection and he was asked to play a guaracha whose title became Ochoa’s nickname, “El Cubanito” (the little Cuban boy).

In 1962 he started to work in radio, producing his own show, “Trinchera Agraria”, specialized in música guajira campesina (Cuban country music). In 1971 he left radio and started to play in the Casa de la Trova de Santiago together with Quinteto de la Trova and Septeto Típico Oriental. Things stayed that way until veteran group leader Roberto Echeverría left Cuarteto Patria in 1978. Elíades Ochoa joined the legendary group, which, until then, had not recorded any albums despite its popularity.

With the addition of Eliades Ochoa, Cuarteto Patria started its international career, playing since then in Europe, Mexico and even the United States. In addition, the music repertoire was expanded from the original bolero and criolla, Cuarteto Patria’s specialties, to include son montuno, guaracha and guajira. All of it perfectly integrated in a natural way by a group bent on preserving the best musical tradition in Cuba with an essential line-up: guitars, acoustic bass, percussion and well harmonized vocals.

In 1997 Eliades Ochoa participated in the Buena Vista Social Club project, that Ry Cooder produced, bringing together some of the best performers of Cuban son.

Although Eliades Ochoa announced his retirement as a trova singer in early 2001, the Cuban musician acknowledged in May of that year that he would continue singing his music throughout the world, after reconsidering that first decision. “It is difficult to give up the public who listens to my music, I appreciated that during my tour of South America.”

In December of 2008, Eliades Ochoa and other Cuban musicians met musicians from Mali at a Madrid studio. they recorded an album titled Afrocubism.

When Eliades Ochoa is not on tour you can find him chatting with his friends or signing autographs in his hometown, Santiago de Cuba, at the intersection of José María Heredia and San Pedro streets.

Cuban singer Addys D’Mercedes grew up in Oriente, the southern, rural part of Cuba. At local parties she heard her father playing sones and guajiras on the guitar, such as El Cuarto De Tula or El Carretero”, which now have become popular worldwide thanks to the success of the Buena Vista Social Club. The radio played songs of the Nueva Trova from Pablo Milanés, Silvio Rodríguez and Sara Gonzáles, Dominican merengues, Mexican rancheras and the latest songs from Madona and Michael Jackson.

As a young girl, Addys sang boleros and Nueva Trova songs at parties. At the age of 16 she became the lead singer of the group Onda Joven, in Moa. One year later she started her professional career as lead singer of several famous Cuban groups Los Neira, Timbre Latino and Spectrum.

In January 1999, Addys started to record with her group ¡Q´ba! in Havana. As a tribute to her Oriente roots, she sung her own new arrangements of the three very famous songs El Carretero, Capullito De Alelí and Como Fue, featuring Coto (Cubanismo) on tres.

In September of 1999 she recorded in Havana a set of nine original compositions with ¡Q´ba! inviting musicians from Afro Cuban All Stars and Jóvenes Clásicos del Son. Unlike what is common in Cuba, the recording had a wide range of Spanish American musical styles, Cuban styles like son, timba, guajira and cha cha cha alternate with salsa, cumbia, bolero and bachata. On the guajira No Me Abandones the 76-year-old singer Raúl Plana (Afro Cuba All Stars, Sonora Matanzera) sings a duo with Addys.

Fascinated by her warm voice, Cándido Fabré recorded with Addys the very popular duo La Fórmula in the summer of 2000. 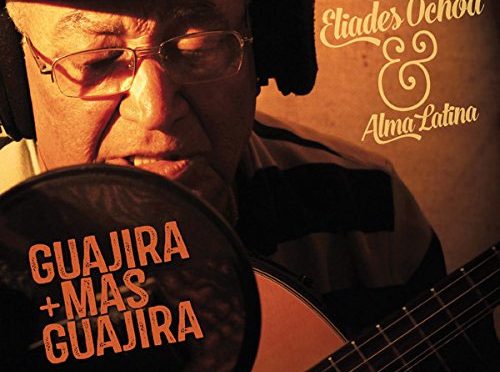 Buena Vista Social Club member, guitarist and singer Eliades Ochoa says, “Cuban music has a certain feel, that sway, that harmony. “It can get right to the heart and the soul, no matter who you are.”

Isn’t that the barest truth!  And, for Cuban music fans the ripe riches are set to hit the streets May 2nd with the Tumi Music release of Guajira Mas Guajira.  Teaming up the band Alma Latina and his sister, vocalist and collaborator Maria, Mr. Ochoa and bandmates delve into the country music of Cuba or música guajira.  Of course Ms. Ochoa isn’t just a sister but comes with a prestigious musical background of her own playing with the likes of Ruben Gonzales, Sonera Edition, Tierra Caliente, Caribe Typical and El Grupo Achala, as well as touring with Omara Portuondo, Ibrahim Ferrer and her brother.

Packed with dizzying array of guitars, sassy percussion, piano, congas, bongos, trumpet and saxophone, Guajira Mas Guajira will have Cuban music fans jumping up and down like a kid hopped up on Christmas, birthday cake and a passel of puppies.

Mr. Ochoa says of Guajira Mas Guajira, “Together with Buena Vista Social Club, this album is one the most important and interesting recordings of my life. “Alma Latina is an inspiration and an expression of art, music, painting and dance. It is a call to bring harmony and love through music to all human beings and Latin brothers. And it’s about the dance,” an element that runs through every charming track on the album.

Moving through tracks like “Que Sigan Sonanando Las Campanas” with some lovely vocals by Mr. Ochoa, the raucously delightful “El Punto Cubano” and spirited “Me Voy Para Monte,” Cuban music fans get a real feel for the unrestrained joy of the guajira.

I have no doubt that where Guajira Mas Guajira goes it will charm Cuban music fans.