Calypso Travels will be available on vinyl on January 31, 2020. The original recording, released in 1959 featured master calypsonian Lord Invader before his death in 1961. Lord Invader’s calypso had a sharp sting, an art form originated from violent street battles and a conduit to speak truth to power.

These reissues were remastered from the original tapes by GRAMMY Award winning engineer Pete Reiniger and are presented in the classic Folkways fold-over, paste-on jackets, reproducing the feel of the original releases.

globalFEST has announced the four 2019 winners. The awards honor four individuals for their exceptional, visionary, and inspiring contributions to the cultural landscape in the American performing arts field.

83 year-old Slinger Francisco, better known as Mighty Sparrow and affectionately dubbed The Birdie, is the incomparable Calypso King of the World.

With a career that spans over 60 years and counting The Sparrow is one of the most important living exponents of one of Caribbean music’s most important traditions, known for a combination of politics, daily life, humor, innuendo and dance music. Sparrow continues to translate his witty island authenticity to the world, in a one-man demonstration of the role that culture plays in uniting humankind.

Leigh Ann Hahn, who started at Grand Performances in 1992, is an endlessly creative and innovative programmer. She is a leading figure in the world music performing arts field who has done a remarkable job producing free programs that pay homage to her beloved Los Angeles and its diverse communities with global breadth, depth and power.

Her programs are uniquely multidisciplinary and frequently shine a musical light on significant historical, political and social events.

Tamizdat, founded in 1998 by Matthew Covey and a group of musicians, has become a critical organization in the performing arts and cultural exchange fields. Tamizdat’s work facilitates cultural exchange by easing the burden of the visa process for artists entering the U.S through their programs TamizdatAVAIL, legal visa assistance, outreach, the Artist Mobility Forum, The White Paper Project and other activities.

Their mission is motivated by the conviction that the international mobility of culture is fundamental to a healthy and progressive global civil society and their work has enabled thousands of artists to perform on stages across the country.

Lee Williams has worked professionally as a venue booking agent, promoter, and non-profit arts leader since 1982, playing a defining role not only in the music culture and community identity of Bloomington, Indiana, but also as a champion of world music in North America.

A co-founder of the Lotus World Music & Arts Festival and founder of the non-profit Lotus Education and Arts Foundation, Lee served as Director of Lotus from 1995 to 2013 and as Artistic Director from 2014 through his retirement in 2017. He also co-led the creation of the Midwest Consortium, a professional and block-booking network for world-music presenters that now includes peers from across the US and Canada.

Slinger Francisco, also known as Mighty Sparrow, was born on July 9, 1935 in Grand Roy, Grenada and migrated to Trinidad with his family when he was merely one year old.

At 20, Mighty Sparrow arose as the top Calypsonian with his record-breaking hit, Jean and Dinah. During the course of his career, he continued to release popular and influential albums with rabble-rousing lyrics and unwavering social commentary.

In 1958 Sparrow became the only calypsonian to have had a triple win, in the same year, in the Road March Competition. The calypsos included P.A.Y.E. (Pay As You Earn, a song that allowed the citizens of Trinidad and Tobago to comprehend the significance of paying taxes), Russian Satellite (a song exposing cruelty to animals) and Theresa (a song where, for the first time in his career, he used other languages).

In 1959 he released Federation, (a song that revealed his dissatisfaction over the breaking up of the planned Caribbean Federation). In 1960 he released more effective recordings such as May May and Leave the damn Doctor. Royal Jail and Ten to one is Murder followed in 1961.

In total, Might Sparrow won Trinidad’s Carnival Road March competition eight times, Calypso King/Monarch eight times, and twice earned the Calypso King of Kings designation. He has released over 70 albums to his credit.

The outstanding calypso/soca singer and musician, the Mighty Shadow, died at hospital, in the early hours of Tuesday, October 23, 2018. He was 77.

Ailing for some time, he’d suffered a stroke just days before.

Over the course of 5 decades, he’d stood out with his unique dress(regularly like ‘a minute past midnight’, under a broad-rimmed hat), vertical bounce dance style(a la Masai tribesmen), sound(infused with ‘tambrin’ goatskin-drum and fiddle/violin motifs), and lyrics(‘so serious, they sometimes sounded humorous’).

Born in Belmont, a suburb of Trinidad’s capital, Port of Spain, he grew up, from around age 4, on a farm in the village of Les Coteaux, over on the sister isle, Tobago, and soon took to music, accompanying his musician grandfather, later starting to compose songs(via guitar, primarily).

A strapping 6-footer with a raspy, low register voice, and given to hums, his experiments with ‘walking’, more fluid basslines and rootsy elements began informing a new sound,- the ‘soul of calypso’, which entered the lexicon through fellow musician, Lord Shorty, who added transposed East Indian elements and named it ‘sokah’.

In a tent for the first time in 1970 (under the Mighty Sparrow), he broke through in a big way with “Bassman”, the ‘road march’(, or song played most over the 2 costumed parade days of the country’s pre-Lenten carnival,), and “I Come Out To Play”, in 1974.(“Bassman” opens…’I was planning to forget calypso and go’ plant peas in Tobago…But everytime I lay down in meh’ bed…hearing this bassman in meh head’)

He repeated the feat in 2001, with “Stranger”, which also led to victory in the soca monarch contest.

After narrowly finishing second to the Sparrow 26 years earlier, he prevailed in the national calypso monarch contest in 2000.

Songs about life, philosophy (“My Belief” and “Dingloay” aka “Music), the music industry (1979’s “Dat Soca Boat”, arranged by the influential Art de Coteau, a cracker that featured on the 2011 compilation, ‘Sofrito: Tropical Discotheque’, and “Sing Boy Sing” about piracy), brotherly and romantic love, the ‘dark arts’/bizarre (2001’s “Goumangala”), childhood influences, and, every so often, ‘doing-me-wrong’ competition judges(…with ‘…degrees in stupidity’) made up a vast, varied repertoire.

The classic “Poverty Is Hell” (..,’and the angels are in paradise…”), amazingly, failed to get him into the 1994 calypso final.

Apart from stints in those of the Sparrow, Lord Blakie(‘Victory’), and Lord Kitchener(Calypso Revue), he also appeared with the other tents (multi-artiste venues that operate during the carnival season), such as Kingdom of the Wizards, Spektakula, Kisskidee, and Kaiso House, and in-between, in the a decade from the late 1970’s, ran 2- Master’s Den and Mas Camp.

The Shadow received one of Trinidad+Tobago’s highest civilian honors, the Hummingbird Medal, in 2003, for ‘contribution to the arts’, and was due to receive an honorary doctorate from the University of the West Indies on the weekend of October 26-28, 2018.

Among the many paying tribute was the country’s Prime Minister, Dr Keith Rowley, who said he’d “revolutionized the calypso world with his haunting sound and unique delivery which he crafted and perfected in an impressive catalogue of work spanning several decades.”

“He was an original in all his various musical creations. His music told us stories about ourselves through poignant social commentary which was often fused with wry humour. Over the years his contribution to the development of our local music earned him regional and international acclaim”.

Shadow leaves to mourn 5 children, including Shawn and Sharlan, who both followed him into calypso.

The Renegades is the most famous steel band from Trinidad and Tobago. In 1997 they won their third consecutive “Panorama” (National Championship) and entered in the Steel Drum legend.

The Renegades are from East Port-of-Spain. They receive standing ovations during their performances, mesmerizing audiences with their varied repertoire comprising classical, pop and calypso pieces. 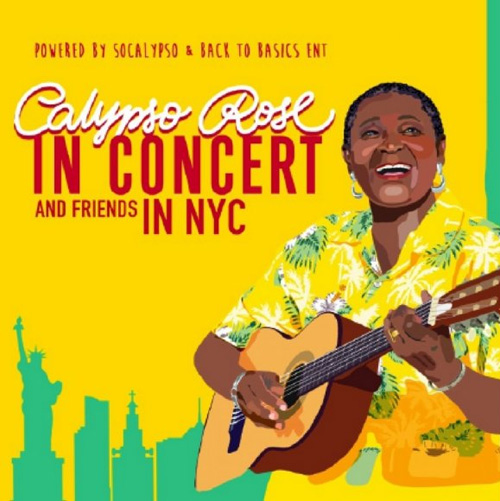 Calypso Rose’s latest album is “Far from Home“, which will be released in the United States by Mad Decent.

Calypso Rose, a living legend in the calypso world, has brought her vibrant and irresistible music from her native Tobago to audiences on every continent, becoming one of the leading and most honored ambassadors of Caribbean music. In a genre traditionally dominated by males, she is the only woman to have captured the Calypso Monarch and Road March titles.

In addition to winning the Calypso Queen contest five years in a row, she has written numerous political and women’s rights songs and the calypso classic Fire In Me Wire. A documentary film, Rose, Calypso Diva, directed by Pascale Obolo was released in 2010.

Rose McCartha Linda Sandy Lewis was born in 1940 in the tiny island of Tobago in Trinidad and Tobago in the West Indies. She started singing at 15. In 1966 she wrote ‘Fire In Me Wire,’ which became an international calypso anthem.

In 1977 she became the first woman to win the crown of Calypso Monarch (a yearly competition that was originally called Calypso King but was renamed Calypso Monarch after her triumph) and the Road March title.

Calypso Rose has performed throughout the world and shared the stage with such popular stars as Miriam Makeba, Tito Puente, Mahalia Jackson, Michael Jackson, Roberta Flack, and Bob Marley.

She has written over 800 songs and recorded more than 20 albums, including the recent Rose, Calypso Diva that is available in the United States of America on the World Village label.

Calypso Rose has received more awards and medals than any other calypsonian from governments in Trinidad, New York, London, Washington, and Africa. She is featured in the films One Hand Don’t Clap and Calypso at Dirty Jim’s.

Today she lives in Queens (New York), but every year she returns to her island.

“I would especially like to thank WOMEX, the World Music Expo…but now I want to keep you on your feet by dancing!,” said Calypso Rose, from Tobago, who ended the closing ceremony delivering a special performance accompanied on stage by the all-star Calypso Sound System featuring Drew Gonsalves and other members of Kobo Town.

The WOMEX 2016 Artist Award will go to Calypso Rose, the acclaimed singer from Trinidad & Tobago and composer of numerous hit calypsos. Calypso Rose will receiving the prestigious award in Santiago de Compostela (Spain) on October 23, 2016. The 76 year-old Calypso star will perform together with members of Kobo Town.

Calypso Rose started her remarkable career in the 1950s. Rose first performed at WOMEX in 2006, where she was scheduled to showcase as part of the Calypso@Dirty Jim’s all-star ensemble, but the band could not appear due to travel complications, so Calypso Rose spontaneously took on the show, accompanied only by piano, and had a great response from the adience.

A singer-songwriter and activist, Calypso Rose has received numerous awards and titles and won all relevant competitions. It was for her that the ‘Calypso King’ competition was changed to the gender-neutral ‘Calypso Monarch’.

“I am honored to receive the prestigious WOMEX Artist Award,” sayd Calypso Rose about the WOMEX award. “Although I have received many, many awards from governments, institutions etc. in my life, I still feel very honoured to receive this specific award, which is a global one. It is a special recognition, also for my fans all over the world. They will be happy to know I’m receiving this award. For that I thank you.”

Two of her most recent recordings are Far From Home and Queen Of Trinidad.

From the island of St. Croix in the U.S. Virgin Islands, Blinky and the Roadmasters play a fascinating style of Caribbean dance music that fuses calypso, African-derived rhythms, Hawaiian ukulele, and a two-saxophone front line that might be otherwise heard in a Texas polka band. The word play in the English-language songs and the happy spirit of the music make for an appealing listening experience.