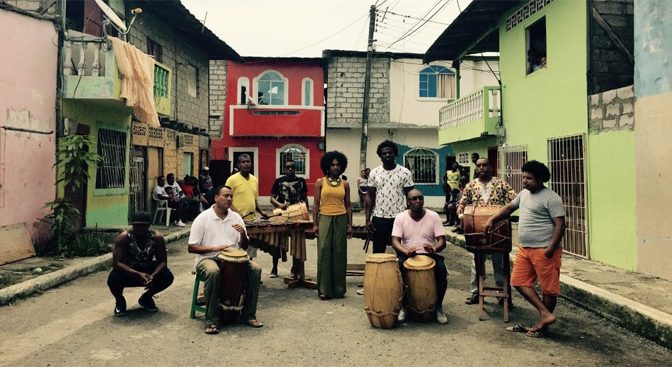 Much-admired South American ensemble Rio Mira is set to perform at The ArtsCenter in Carrboro, North Carolina. The concert is part of an American tour that includes music venues and world music festivals.

Rio Mira is a marimba and vocals led ensemble formed by top musicians from Ecuador and Colombia to draw attention to the music of the El Pacífico region along the Pacific coasts of the two countries. Taking its name from the river which runs from Ecuador into Colombia, Rio Mira’s music pays tribute to the coastal city of Esmeraldas and its role in the Afro-Pacific diaspora.

El Pacífico was a refuge for cimarrones, enslaved persons who escaped shipwrecked ships or plantations. Over time, the region’s unique marimba music incorporated the cimarrones’ Afro-Pacific identity as well as West African traditions they had preserved. Today, UNESCO recognizes the music (along with associated chants and dances) as Intangible Cultural Heritage.

At the center of this music, and of Rio Mira’s sound, is the marimba, made of chonta palm wood. The marimba performs both melodic and rhythmic roles in the music and tells the story of its own Bantu roots.

Renowned percussionists Esteban Copete, who is Afro-Colombian, and Larri Preciado, who is Afro-Ecuadorian, bring to their performances a deep knowledge of this folkloric tradition as well as a willingness to engage with new directions and soundscapes to expand the sonic palette of the group. The group also includes Ecuadorian vocalist Karla Kanora and a group of superb percussionists. 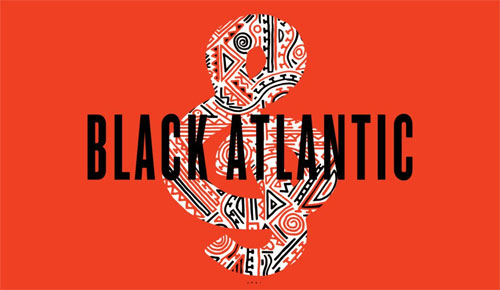 Duke Performances will present a Black Atlantic, a captivating six-day world music festival, celebrating the music of Africa and the African diaspora. The festival takes place the last week of March 2018 at several venues in Durham, North Carolina .

The extraordinary program includes some of the finest artists from Africa and the Caribbean. The festival opens with acclaimed traditional Dominican bachata musician Joan Soriano. Next is one of Haiti’s top female performers, singer-songwriter Emeline Michel.

Afro-Venezuelan vocalist Betsayda Machado and her backing band La Parranda El Clavo are one of the sensations in the world music scene.

The last concert of Black Atlantic will present flamenco star Diego El Cigala with top salsa musicians. His most recent album Indestructible is a tribute to salsa music.

For more information or tickets go to: dukeperformances.duke.edu

La cumbiamba eNeYé is an ensemble that performs concerts and workshops with traditional instruments from the African Diaspora in Colombia, as well as indigenous and European instruments and influences. All these are mixed together in the traditional musical styles that developed throughout the colonial era, and continue to evolve. “eNeYé” has the range of versatility to perform from a quintet format, for reduced space events; up to a 10-piece band format for large events.

La cumbiamba eNeYé was created in the summer of 2000 with a group of skilled musicians who share an enthusiasm for investigating, performing and advancing musical expressions emanating from the combination of African, Indigenous, and European cultural contributions in the Americas.

Initially, La cumbiamba eNeYé began performing a repertoire of cumbia related rhythms outdoors in different public areas of New York City. Given these circumstances, “Eneyé” adopted its denomination of ‘cumbiamba’ from the cultural vocabulary of the northwestern Caribbean coast in South America. In Colombia, ‘cumbiamba’ is a familiar word, which carries the meaning of an outdoors celebration with live cumbia music, or the bands that perform in such events. La cumbiamba eNeYé evokes this lively atmosphere with every performance, and has also extended them into different cultural venues throughout the city and beyond.

La cumbiamba eNeYé’s musical work and development is shaped by traditional styles that emanate from the popular coastal traditions in which music is just one of the various artistic manifestations. The group takes coastal music as a departing point and source of material not only because of the musical background of some of the members, but because coastal traditions in Colombia, as in other regions of the Caribbean are inexhaustible fountains of artistic traditions. In Colombia having two different coastal regions, Atlantic and Pacific, which have led to distinct cultural traditions, doubles this situation.

La cumbiamba eNeYé’s approach to music is investigative. However, from the styles, genres, rhythms, and melodies explored, the group is inspired to create new arrangements and even entirely new compositions, which although traditional influenced, may have eclectic characteristics in texture, harmony or rhythm. This aspect of La cumbiamba eNeYé can be seen as the result of being a New York born and based group, where interactions and continuous contact with musicians from different places around the world generates new possibilities.

Since its beginnings, La cumbiamba eNeYé has been working from a handful of traditional kinds styles present in Colombia. Some of these musical styles are:
Gaitas y Tambores, Banda Pelayera, Terapia or Champeta, Conjunto de marimba, and Chirimía. 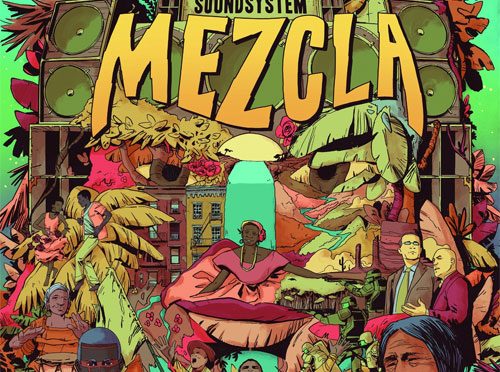 Done your stretches? Done your deep breathing exercises? Well, you’re going to need them when you get an earful of the eight-member, New York City based group M.A.K.U. Soundsystem’s Mezcla set for release on May 27th on the Glitterbeat Records label.

With a ferocious sound that comes with a bite and a message with an even bigger bite, M.A.K.U. Soundsystem whips up a mix of Colombian and Afro-Colombian with dashes of funk, Afrobeat, jazz and hip-hop thrown in for good measure. Savagely kickass, Mezcla rips the bindings of polite recordings in favor a live sounding recording all the while examining the immigrant experience.

The group’s bassist and singer Juan Ospina explains, “They’re putting their lives at risk to come to El Norte, but the borders they cross have all been created by man. Look down from space and you won’t see them.”

This message is apparent as Mezcla’s liner notes dedicate the album to “The Everyday People of all races and backgrounds, [e]specially to those who find within their spirit the strength to outgrow the hardship inside themselves to promote a positive life for all amidst the wickedness of the few who constantly rule this world to turmoil and despair.”

So, take that, tyrants!

Thrilling and electrifying fans from the opening “Agua” with its sizzling blend of percussion, brass and keyboards, M.A.K.U. Soundsystem makes short work of drawing listeners in with offerings like the uninhibitedly wild “Thank You Thank You,” the savagely cool Afro-Colombian percussion of “Let It Go” and the sultry “Positivo.”

Some reviewers have called the music “raw” and “gritty,” but for those looking for an authentic, non-overproduced recording Mezcla is the real deal. That often sought after live performance energy comes across loud and clear on Mezcla. Other goodies include the fun filled “La Inevitable,” the sassy bright “La Haitiana” and infectiously danceable “Happy Hour.”

Mr. Ospina says, “We try to keep it human, to give people something they can relate to.”

The brightly colored music of M.A.K.U. Soundsystem’s Mezcla is savagely hip and restlessly sharp so you still have time to build up your stamina before May 27th.