David Nesta “Ziggy” Marley was born October 17, 1968, in Kingston, Jamaica. He learned how to play guitar and drums from his father, Bob Marley, the legendary reggae singer. His mother Rita called and baptized him David. There are two versions of how he became to be known as Ziggy. One version claims that his father Bob Marley nicknamed him “Ziggy” in reference to a big spliff (a Jamaican word for a rolled cigarette with marihuana). Another version is that he was nicknamed Ziggy in reference to British singer David Bowie and his 1972 album, The Rise & Fall of Ziggy Stardust .

In 1979, Ziggy and his siblings, Cedella, Stephen and Sharon, made their recording debut with their father, “Children Playing in the Streets”. The Melody Makers, as the group came to be known blended blues, R&B, hip-hop and roots reggae. They played occasionally for several years, including at their father’s funeral in 1981. Their debut LP was Play the Game Right, which was a very pop-oriented album, earned Ziggy some derision from critics. After their first two albums, Play the Game Right (1985) and Hey World! (1986), The Melody Makers earned their first Grammy (Best Reggae Recording) for Conscious Party (1988), an album produced by Talking Heads Chris Frantz and Tina Weymouth which included the hit songs “Tomorrow People” and “Tumbling Down.”

Subsequent albums included the Grammy-winning One Bright Day (1989), Jahmekya (1991), Joy and Blues (1993), Free Like We Want 2 B (1995), their third Grammy winner Fallen Is Babylon (1997), The Spirit of Music (1999) and Ziggy Marley & the Melody Makers Live, Vol. 1 (2000), which featured some of their biggest hits as well as a cover of Bob Marley’s “Could You Be Loved.” While selling records by the millions and selling out countless concerts with the Melody Makers, including a recent European tour, Ziggy Marley has never lost sight of his foundation of faith, fellowship and family.

After two decades as the driving creative force behind The Melody Makers, Ziggy Marley stepped out on his own with his first solo album. Dragonfly was released on April 15th (2003) by Private Music.

Never content to rehash the success of his past, Ziggy used Dragonfly to explore new ground and create his own distinctive musical identity as a solo artist. “Working on my own gave me a chance to take my time and experiment a lot,” said Ziggy. “It took one year to finish this record ” it’s the longest I’ve ever worked on one album. It”s different when you’re on your own. At some point it”s scary, and then at another it’s a drive that makes you focus more.”

Ziggy also felt it was time for a change of scene. He wrote the album’s songs in Jamaica but recorded them in Miami and Los Angeles. “As an artist I need to experience different things, to see the world and have different energies. It helps me grow as a person to be outside my element.”

Ziggy provided his voice for the Rasta jellyfish that appears in the 2004 animated film Shark Tale. He also collaborated with Sean Paul on a cover of his father’s song “Three Little Birds” for the soundtrack.

Ziggy also sang the theme song for the popular PBS children’s show “Arthur”. In addition to his work in 2004 he also decided to marry a VP at William Morris Agency, with whom he has a daughter.

Love Is My Religion was originally released in the US exclusively at Target Stores and was re-released in 2007 with additional material including live recordings of Jammin, Dragonfly, and Look Who’s Dancin’. These live tracks were recorded at Los Angeles’ Avalon during the 2006 Love Is My Religion world tour.

In addition to his skills as a singer, songwriter and producer, Ziggy founded U.R.G.E. (Unlimited Resources Giving Enlightenment), a non-profit organization that benefits a wide range of charitable children’s causes in Jamaica, Ethiopia and other developing nations. More recently, he has lent his support to the Youth AIDS campaign.

Colours of Ostrava is a multi-genre music festival organised annually in Ostrava since 2002. The festival features international acts, including world music artists. 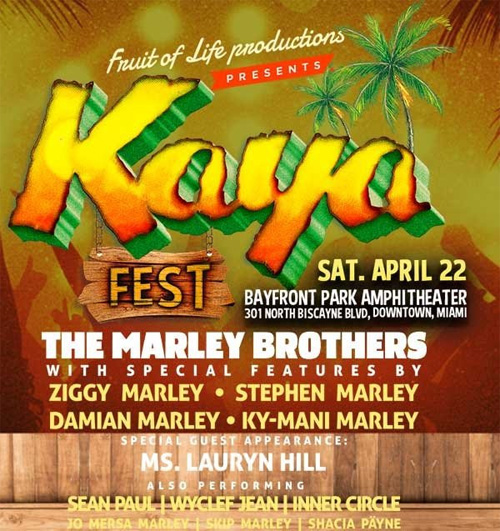 In addition to great reggae music, Kaya Fest will focus on creating public awareness on the many uses of the cannabis plant. On April 21st the organizers have scheduled a free symposium with a panel of experts in the field of medical and industrial cannabis as well as the regulation aspects of the plant.

Medical Cannabis has recently been legalized in the state of Florida. The many health benefits of the cannabis plant have been reported to include treatment of glaucoma, control epileptic seizures, stop cancer from spreading, slow progression of Alzheimer’s disease, ease pain of multiple sclerosis, discomfort of arthritis, treatment of Lupus and Crohn’s disease.

Brazilian singer Seu Jorge will celebrate David Bowie’s catalog, with an orchestra for the first time, through a Brazilian lens.

Belle And Sebastian
Spoon
Additional artist to be announced