The husband-wife duo of violin maestro R. Kumaresh and veena virtuoso (lute) player Jayanthi Kumaresh are set to perform on October 1st at the Thalia at Symphony Space in New York City. This concert is part of the Carnatic Masters series, featuring leading figures in South Indian music, presented by Robert Browning Associates.

R. Kumaresh and Jayanthi Kumaresh are two of the leading instrumentalists in their respective fields. The duo will perform solos and duets accompanied by R. Sankaranarayanan on mridangam (double-headed barrel drum) and S. Krishnaswamy on ghatam (clay pot drum).

R. Kumaresh has 40 years of concert experience and is internationally renowned both as a soloist and for his duets with his brother, Ganesh Rajagopalan.

Jayanthi Kumaresh traces her musical heritage back six generations. She has captivated audiences around the world for 30 years and collaborated with many of India’s major artists.

Violinist Sabina Rakcheyeva is the first ever Azerbaijani graduate of the Juilliard School in New York.

Sabina is passionate about the fusion of Eastern and Western music and has performed her improvisations on traditional Mugham to critical acclaim.

In 2003 Sabina addressed the World Economic Forum in Davos, Switzerland on behalf of the Music Youth and was featured on BBC, CNN, Voice of America Radio and U.S. Government Television.

In 2011, the Sabina Rakcheyeva Ensemble released its first album titled UnVeiled, featuring a unique fusion of instruments and styles. Since 2013, she is also a member of DECO Ensemble, a group specialxied in Nuevo Tango.

Sabina Rakcheyeva is a member of the European Cultural Parliament and has completed her PhD in cultural diplomacy from SOAS, University of London. She serves as the Cultural Advisor at The European Azerbaijan Society and the Arts Global Foundation. 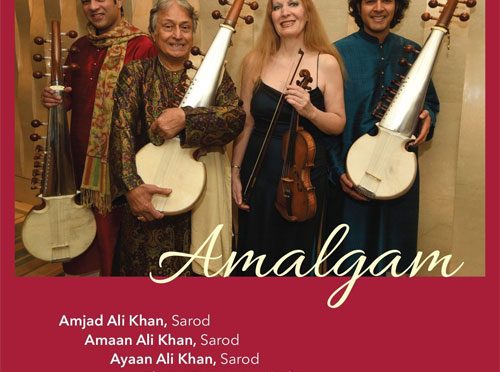 This time, on amalgam, Aman and Ayaan have also brought in their father, renowned sarod maestro and composer Amjad Ali Khan. Most of the album features raga compositions by Amjad Ali Khan. Elmira Darvarova adds one of her own compositions inspired by Bulgarian folk songs to the mix.

The two great classical music traditions meet and interact wonderfully. Throughout the album there are moments of calm along with segments of dazzling virtuosity. The quartet is joined on some pieces by tabla master Anubrata Chatterjee.

Aidan O’Rourke is a fiddle player and composer from Oban on the West Coast of Scotland. He has toured extensively in Europe and North America from the age of 15 and has made his name as one of Scotland’s most expressive and dynamic musicians.

At 19, Aidan formed Tabache with Claire Mann and went on to record the internationally acclaimed album Waves of Rush. Aidan now performs with the hugely successful Blazin’ Fiddles (Live Act of the Year 2004) and is a much sought after session musician, having performed on over dozens of albums ranging from Runrig to Michael McGoldrick and Karen Matheson.

Commissions have included a piece titled Mantra Alba which welcomed the Dalai Lama to Scotland.

Sirius is his first solo album which evolved from a commission by Celtic Connections in 2003.

Yosvani Castañeda Valdés will showcase the Cuban fiddle style at the 4th Annual World Fiddle Day that will take place on Saturday, May 21st at Historic Fort York, in Toronto.

Originally from Cuba, Yosvani was classically trained at the Amadeo Roldán Conservatory in Havana. As a teenager, he toured throughout Canada, Europe, Japan and South America, as both a solo artist and member of the popular Cuban band Bamboleo. His Bamboleo discography includes Mi Verdad (Bis Music, 2007).

Yosvani returned to Canada as an adult in 2008, and has since performed at venues and events such as The Toronto Beaches Jazz Festival, Harbourfront, Lula Lounge, Nathan Phillips Square and the Pan-Am Games. He is especially known for his ability to bring together urban and classical sounds with his Cuban roots.

Yosvani is a member of the Toronto-based Lula All Stars. This collective of musicians from Latin America recorded a great salsa album titled Salsa de la Buena (Lulaworld Records, 2015)

Yosvani will offer a workshop on Latin-American violin.

For more information go to www.worldfiddleday.ca

The 4th Annual World Fiddle Day will take place on Saturday, May 21st at Historic Fort York, in Toronto. The event will feature 100 fiddlers, playing 40 tunes from 25 different countries. Accompanying them is an excellent back-up band consisting of world percussion, clarinet, and keyboards, all celebrating world music.

World Fiddle Day celebrates world music traditions with a mission to provide opportunities for string players of all backgrounds to come together and create great music with some of Toronto’s best professional musicians.

Each year there are special guests for the workshop and performance portions of the event and then the high point, led by fiddler Anne Lederman, is the “Around-the-World Jam.”

Tunes from Canadian folk traditions take their place alongside superb music from the Caribbean, South America, Africa, the Middle East and Asia. This year’s theme, in honor of the Syrian refugees, will showcase the beautiful Arabic song, “Alhamdoulillah,” as sung by the Ottawa children’s choir, adapted for World Fiddle Day Toronto.

Lebanese musician Abboud Abdel’Al was born in 1930. He started his musical career while he was only 7 years old. He is a well known violin player, conductor, composer and arranger, in the Arab countries and in Europe.

He has worked with legendary Arab Artists such as Mohammed Abdel Wahab, Farid El-Atrach, Abdel Halim Hafez, Feiruz etc… In addition, he has contributed and worked with London Philharmonic Orchestra, Jessy King, Anne Dudley, Jaz Coleman and many others.

Smt. Kalyani (1926-2003), daughter of Sriman Nadadoor Ammal Narasimhachariar and Srimati Singarammal, has been one of the very few modern woman composers of Camatic music of 20th Century. She has the distinction of composing in all the 72 melakarta ragas and also in very rare/Apoorva ragas. Her father Sriman Narasimhachariar who was a teacher, Head Master and then Inspector of schools, was a distinguished poet in Telugu and Sanskrit in Andhra Region.

She had an in-born quality to compose lyrics and set them into music herself from an early age. Being brought up in family of scholars in Telugu and Sanskrit, Smt. Kalyani started her initiation in Camatic music in Veena and vocal at a very early age under her mother and sister and also under able gurus. Thereafter she learnt Violin in Madras. She started composing songs at a very early age on Lord Yoga Narasimha of Gatikakshetrarn – Solangipuram- Tamil Nadu, who was her Ishta Daivata. Her first debut in Veena concert was in AIR Madras at the age of 16.

After her marriage with Sri Varadarajan, who was then working in the Indian Army and then in Indian Railways, Smt. Kalyani shifted to Mumbai and settled there. In the year 1956 she performed in the Maharashtra Sangeeta Sammelan where she was honored with gold medal by the then Chief Minister Sri Morarji Desai. That was the time when she joined All India Radio, Mumbai by invitation in the Camatic music department (perhaps one of the first in that department). During her tenure in AIR, for about 30 years, she has accompanied a number of artists on Violin and has participated in orchestra (s).

Her quest for composing kritis in Camatic classical music in Telugu, Sanskrit and Tamil was ever growing with her. She could compose with ease number of kritis in different rare ragas. Due to her rich study and knowledge in Hindustani Music and her acquaintance with great musicians like Pt. Gajaanan Rao Joshi, VV Jog and others. She was able to sing/play Hindustani ragas effortlessly. This she applied in her kritis also. She has composed a number of kritis in Hindustani ragas like Bahar, Dundubi, Bagasri, Jayajayawanti (Dwijavanti) Gowda Malhar, Jonpuri, Gurjari Todi, Madhukauns, and Chandrakauns.

It is understood that she composed songs when ever and where ever she visited a temple. That was her way of admiring and expression of feelings. For instance when she had visited Yadagiri district, Jwala Narasimhan temple, she composed a kriit in the raga Kanada. Similarly when she visited Chamundeshwari temple she composed ‘Chandikeshwareem Asrayamyaham’ in the raga Abhogi. Apart from this she has composed two vamams – one tana vamam in raga Subhapanthuvarali (Pahimam Payorasi Putri) and One pada vamam in the raga Vachaspathi on Raja-rajeswari- This is a Pada vamam is more apt for the dance concert. She has composed a Thillana in the raga Bhushavali and a raga malika in rupaka tala. Her compositions are well appreciated and rendered by many musicians all over. Her works were popularized and propagated by various senior performing musicians like (late) Prof. Sh. T.R. Subramaniam, Tanjore S. Kalyanaraman, Madurai Somasundaram (Somu), S. Rajam etc.

Her compositions carry Chittaswaras, madyamakala sahitya and a careful application of grammatical aspects of Camatic music like Yati, Prasam, Samasam, Vibhakti etc. Perhaps she has followed the footsteps of Muthuswami Dikshitar in her compositions. The words incorporated in the sahitya are of very high order with appropriate usage. She used the Svanama Mudra ‘Kalyani’ or ‘Kalyani Varada’as her signature in the compositions. The mudra blends with the sahitya, as it appears.

Smt. Kalyani Varadarajan had the rare distinction of being a performing musician in three different genres and graded in Vocal, Violin and Veena and has given concerts on the AIR (All India Radio) and also on the stage. She has toured to USA and Japan etc. for concerts during the days when global travel was not all that common like the present day.

Smt. Kalyani passed away on 28th October 2003, and her memories are cherished through her compositions.