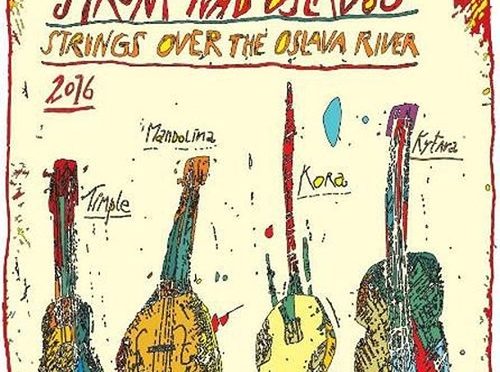 In 2016, violinist Jitka Šuranská brought together an ensemble of string instrument maestros from various countries, representing diverse traditions. The concert at Festivalu Folkové prázdniny (Festival Folk Holidays) in Náměšť nad Oslavou by the Oslava River in 2016 was recorded and released under the title Strunk Nad Oslavou – Strings over the Oslava River 2016.

The concert program included a set where each musician took the lead and then various pieces where the full ensemble played together. The result is a wonderful mix of solo work, dazzling interplay and superb ensemble creations. The musical influences include traditional folk music from the Canary Islands, Senegalese music, Czech folk tunes and world fusion, where various genres met and delivered a deeply satisfying mix.

The CD version includes a booklet with photos, liner notes and biographical profiles of the musicians in Czech and English.

Timple maestro Germán López is set to perform on July 1st at Sala Berlanga in Madrid. The artist from the Canary Islands (Spain) will present his new album titled Canela y Limón (cinnamon and lemon), recorded together with the prestigious guitarist Antonio Toledo from Cadiz.

Both musicians have toured together, showcasing the timple (small Spanish guitar) in the United States, Canada, Europe and China, an international tour that was forged after showcasing at the influential World Music Expo Womex 2014, with the support of the SGAE Foundation.

Germán López is an acclaimed timple player from the island of Gran Canaria, part of the Canary Islands (Spain). He’s a conservatory-trained musician who studied at Conservatory of Music of Las Palmas (Gran Canaria), where he graduated with a master’s degree in 2001.

Since the age of ten, Germán has been playing timple concerts. In 2014 he performed at the significant World Music Expo Womex, the largest international gathering of world music professionals. This concert led to several tours throughout the globe.

During his recent tours, he was accompanied by Spanish guitarist Antonio Toledo.