Ivan Tucakov was born in 1978, in Belgrade, Serbia. He grew up in Turkey and Serbia. Throughout the years, he also traveled to Spain, Portugal, Mexico and Peru in search for new inspiration. He currently lives in Canada.

The Tambura Rasa Collective in its standard form consisted of Ivan Tucakov on the guitar, Tarun Nayar on tablas, Suzka on the violin, Mike Michalkow on percussion, and Brian Poulsen on guitar and John Bews on bass.

Eastern Moon Rising showcases the multi-faceted music side of saxophonist and composer Boris Kovač and his band La Campanella.

Born in a university town, Novi Sad, in the former Yugoslavia (and now part of Serbia), and entirely self-taught, Branco began playing guitar at the age of 15 and very soon found a love of jazz and Brazilian music, influenced by Joe Pass, Charlie Parker and Antonio Carlos Jobim. Soon, Branco was being featured at a number of jazz venues and festivals in his home country and appeared at the largest festival “The Days of Jazz in Novi Sad”.

At 18 he prolifically started composing sensual music of great beauty with Sunny dispositions and gathered 1s of tunes till present. He is largely inspired by the Sun, and influenced by Jazz, Traditional Folk music of Yugoslavia, Brazilian, World and classical music. The interest in these compositions led to recordings for radio and TV Novi Sad. Following this Branco formed his “Sad Nova Trio” whose success led to numerous concerts and broadcasts on TV.

As an avid reader of the Sherlock Holmes series, he began to hanker after a different life and wider musical opportunities. In the early nineties he set off to England with little more than his guitar and has since become a fixture on the London and UK music scene, actively composing and performing solo, in various duos and with his NEW trio featuring the elegant Leslee Booth on 6 string contra bass and imaginative Buster Birch on percussion.

Branco has also appeared with his trio on Sky TV “Arts World”, BBC Radio 3’s “In Tune” program and is regularly featured and a favorite on Sarah Ward’s show on Jazz FM and new station The Jazz.

Branco is a qualified teacher at Goldsmiths College, London, where he teaches guitar in his unique, passionate and enthusiastic way, passing that enthusiasm and love for the instrument onto his students from the very start enabling them to relay play the guitar. During seven years of teaching at the college, in course questionnaires he was always rated 5 out of 5, as a mark of excellence and the students satisfaction. 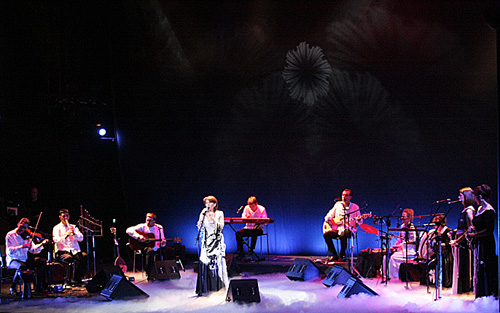 A term like “Eastern European music” gets bandied about by many, including me. It’s one of those convenient generalizations used to cover a category that’s more than a category. From folkloric traditions and age-old ballads to mighty brass bands and fusions that were free to happen in post-communist societies, there’s a lot to take in.

Bilja Krstic and the Bistrik Orchestra offer up Svod: Traditional Songs from Serbia and The Balkans (ARC Music, 2016). I remain unclear as to how many pieces constitutes an orchestra, but this outfit’s 9-strong lineup (plus guest players) proceeds with delightful zest through a set of mainly traditional tunes that retain the heartfelt sevdah (Balkan blues) intent and add enough rhythmic swing to lift the spirits and stir the hips.

Krstic’s soaring (but never overbearing) vocals are a marvel in settings of both sparse accompaniment that lets the emotional content sink in and full band buildups often jazz-like in the way they flow. At times sporting a serenity that seems to stop all else before breaking into a dance-inducing left turn, this highly satisfying collection succeeds on those levels and more, including one spine-tingling a capella track.

In rather stark contrast stands Put (Geenger Records, 2016) by the Zagreb-based trio of Franolic, Jovanovic and Culap. The three play oud (Arabic lute), harmonica and percussion respectively, and while there’s a Balkan sensibility running through their rhythms and melodies, influences from Turkey, India and anywhere blues and jazz have permeated are evident as well.

The oud and harmonica shadow each other with a symbiosis that lets them both take turns slinking or springing forward to take the lead as the percussion (primarily frame drum and ceramic udu) marks changes in time and mood and does some leading of its own. Put has got atmosphere to spare, but there’s a core to this music that’s covertly fierce and passionate. Consider it essential listening.

Of course, klezmer -that celebratory brand of Jewish music rooted in the 19th century and well able to get the heart pounding here in the 21st- is one sort of Eastern European music that’s immediately identified with the region and the people who created it. The Klezmatics have been foremost in keeping the sound alive for 30 years and they’re unlikely to stop anytime soon, which is good news for all of us. On Apikorsim/Heretics (World Village, 2016) the band is as crazy cool and ingeniously mad as ever, harnessing their arsenal of brass, reeds, violin, viola, accordion, guitar, bass, piano, organ, harmonium, kaval, tsimbl, drums, percussion and vocals (dang, that’s a lot of instruments when you consider there’s only 6 people in the band) to create Yiddish songs that are lively and infectious almost beyond belief.

Just as important, they see to it that klezmer’s roots as music of an enduring, vibrant culture are not overlooked in serious or humorous terms. So while songs like “May Redemption Come” and “Who Guides the Ships?” are sincere in their spiritual perspective and “My Mother’s Mirror” pulls no punches on the reality of aging, there’s room for a gastronomically indulgent “Party in Odessa” and a close examination on the title track of exactly what makes happy heretics happy. The Klezmatics are in prime form, playing music they’ve not only mastered but obviously continue to love very deeply.

In a small town in Central Serbia, called Guca, the “Festival of Brass Music” takes place annually since 40 years. It’s a competition to determine the best brass musicians on Earth. More than 300.000 people grab the chance to listen to over 30 bands. And Boban Marcovic Orkestar are among the winners every time, receiving the “best orchestra” award in 2000 as well as “best trumpet” for the maestro himself in 2001 – his 5th win. It was the first time ever that a musician got the highest mark from every jury member.

The reason for Markovic’s continuing success is evident: He is the best Serbian trumpeter, reinventing “traditional” brass music with injections and adaptations of sounds from around the globe. His music is strongly influenced by the old traditions of the Roma. Just listen to his version of the Jewish classic Hava Naguila and you’ll understand.

The band’s repertoire includes Gypsy grooves, chocheks and other dances, as well as tunes from movies of Emir Kusturica, but also new material, composed exclusively for the band. In a mix of archaic jazz and light and sweet Balkan-brass-sound Markovic became a king in the Balkans and now is one of the VIPs of the region. The band performs on weddings, on open-air-festivals, in music academies or on classical concerts with the same power like the best rock bands.

From the historical sight only the Gypsies kept the country’s tradition of brass music alive, from the times of the Ottoman Empire through Tito’s communist regime, right into Slobodan Milosevic’s infamous reign.

Since Emir Kusturica’s notorious Balkan film Underground (1995), Gypsy-Serbian brass music started to have powerful presence on the world music scene. The blasting of Gypsy brass made the film unforgettable, creating the frantic, surreal atmosphere which the film is famous for. None other than Boban Markovic and his orchestra supplied the most impressive tunes of the soundtrack. Boban Markovic Orkestar have played festivals and concerts throughout Europe.

Abrashevich folk dance company was founded in Valjevo, Serbia, in 1905, and at the same time in Belgrade, Kragujevac and few other Serbian cities, and is the oldest and one of the most unique folkloric troops in Eastern Europe. The organization is composed out of school, conservatory and performing ensemble. It has trained thousands of young Serbs in the colorful traditions of South Slavic dance and music heritage. Many generations of young dancers, singers and instrumentalists have been trained by its remarkable staff and have gone on to distinguish themselves with leading theater and dance ensembles and orchestras, throughout the world.

Named after the famous Serbian poet Kosta Abrashevich this vital association of young artists consists of several separate divisions including folkloric song and dance, choral, orchestral as well as theater. Children are eligible for enrollment at the age of four years, and by the age of seven are performing with the brilliance and skill of veterans.

Featuring 60 magnificent young dancers, singers and musicians, ranging from the age of 8 to 25 years, attired in more than thousands costumes, the Abrashevich folk dance company presents fast moving, colorful spectacle of Balkan song and dances in a manner that seems to defy the laws the gravity, speed and sound. The company includes children Dance Ensemble, Youth Dance Ensemble, and Veterans, as well as Youth Orchestra. They have won Gold Medals and First Prizes at international Folk and Arts Festivals.

Aleksandar Simic has established a reputation as one of the leading classical composers of his generation. His most acclaimed works include “Under One Roof” (An Anthropological Journey for the Symphony Orchestra): Commissioned by the United Nations in 2011, celebrating the goals and ideas of the UN Alliance of Civilizations Initiative; “Zodiac – 12 Character Pieces for Piano & Orchestra: sponsored by NASA and the US State Department, with a set of remarkable video installations made from the materials captured by Hubble ST and Voyager ISM, that have been especially designed to follow the music; Missa Solemnior: Marking the Year of Reconciliation following 950 years of the Great Schism between eastern and western Christianity – a Vatican commission; and “Zhukov – A Portrait”, commissioned by the Russian Federation to mark the 50th anniversary of victory in WWII. Live experience of the cycle’s performances.

Saskia Rao de Haass is an outstanding cellist and composer from the Netherlands. She has introduced her innovative new instrument, the Indian cello, to North Indian classical music and created a unique playing style to perform Indian music on the cello. Saskia, although born in Holland, performs at the most prominent music festivals and concert halls the world over as a virtuoso of Indian Classical music.

Saskia has created music for different music productions, dance, film and theatre. She is the founder of the Raga Mala String Quartet and co-founder of East Marries West with Shubhendra Rao. Her varied experiences include collaborations with artists of South Indian music, Jazz, Indian film music, Western classical, Klezmer, Flamenco and contemporary. Saskia has recorded with International record labels and has recently recorded her new album.

Pandit Shubhendra Rao is a composer and sitar soloist, a protégé of world renowned Sitar maestro, Pandit Ravi Shankar, he has established himself not only as a master of his instrument but also as a thinking musician, constantly endeavoring to carry his instrument beyond conventional boundaries.