Eliseo Parra is one Spain’s leading performers and researchers of folk music. He has traveled to small villages to rediscover old songs, musical instruments and learned how to play some instruments in the traditional style. He reconstructs folk music by adding modern elements. His background may seem surprising to some. He began as a rock musician and afterwards became interested in jazz and Caribbean rhythms. Eventually, he ended up rediscovering Spanish folk music.

Parra was born in Sardón de Duero (Valladolid). He began his musical career in Barcelona, in the late 1960s, as a drummer in several rock groups.

In 1971, Eliseo Parra recorded his first LP with the group Mi Generación; an album that featured his own songs. During six years Parra combined his work with the rock band with the solfeggio and harmony studies at the Municipal Conservatory of Barcelona. Around 1976 he took part in the then burgeoning Barcelona jazz scene, also known as Movida Zeleste, by joining Catalan jazz Blay tritono and later the Rondalla de la Costa.

In 1979, Parra recorded with Mallorcan diva Maria del Mar Bonet on Saba de Terrer, an album dedicated to traditional Mallorcan tunes. He collaborated with Bonet yet again on her album Gavines and Dragons. That same year he moved to Valencia to join the group AL Tall with which he had already collaborated previously on the albums Cancos de Vi and Taberna. As a new band member, he participated as performer, composer and arranger on the LP La Batalle d’Almansa.

In 1980, Eliseo Parra returned to Barcelona to study harmony at the recently created School of Jazz and Latin Percussion (Aula de Jazz y Percusion Latin) with the unforgettable Pedrito Diaz. Salsa music became huge in Barcelona and Parra, a singer- percussionist, joined several bands, including Sardineta, which had some international success, and other well known Barcelona based bands such as La Sonora Catalana, La Plater?a, and La Negra. Meanwhile, he collaborated as an instrumentalist and composer in the recordings and live performances of Marina Rossell, Ovidi Montllor, Pilfers and Gato P?rez among others.

In 1983, after a tour of the United States and Canada, Eliseo Parra moved to Madrid to create a musical project based in traditional roots with a group called Mosaic. At that time, Madrid began to replace Barcelona as Spain’s most exciting musical melting pot, attracting musicians from other parts of Spain, as well as from Cuba, Argentina, Equatorial Guinea, Sudan, and many other countries.

The first album by Eliseo Parra’s new band came out in 1984. It was a tribute to the great musician and folklorist from Segovia, Agapito Marazuela, with music from his Songbook.

A second album came out in 1985 with original music inspired by Spanish traditional music. The group toured throughout Spain, France, Italy and Denmark until 1987. From 1988 through 1991, Parra performed solo in Spain, Italy and Morocco. He participated in two episodes tof the Spanish TV series “La Copla” and he worked as music advisor for a TVE (Spanish National TV). During that time he worked as a producer, arranger and composer for albums by La Gaira, Elisa Serna, Angel Carril and Maria Salgado.

In 1992, Parra recorded his first solo album, Al-Bedrio. The album came out in 1993 and Eliseo Parra formed a band that toured Spain, Switzerland and Israel.

For Christmas of 1994, a new album, Arraigo, was released, with 17 of the most beautiful songs from the Salamanca tradition performed with electronic equipment almost in its entirety.

During 1995, Parra taught song and traditional percussion. He also composed and recorded the music for the suite Romance for traditional instruments and orchestra, which was performed for the first time by the National Ballet of Spain together with the Symphonic Orchestra of Madrid at the Teatro de la Zarzuela in September of 1996. At the same time, and together with Susana Weich-Shahak and Jose Manuel Fraile Gil, Parra carried out a series of concerts and conferences about Sephardic music. A double CD, Arboleras, came out with these pieces.

In December of 1996, Eliseo Parra represented Spain at the Forum of Mediterranean Culture that took place in Jerusalem.

During 1998, Parra began to collaborate assiduously with multi-instrumentalists Javier Paxariño and Eduardo Laguillo.

Eliseo Parra is still very popular as a producer and performer. He produced the album Vizcayatik Bizkaiara by Oskorri, the most famous Basque folk band. He also collaborated on the album Lorios by Alboka, featuring Hungarian singer Marta Sebestyen.

In 2017, the book and CD Eliseo Parra: Nunca perseguí la gloria, was released. It is the first authorized biography of Eliseo Parra

The book and disc combo, written by Rafael Alba and prefaced by Fernando Neira, was published by Editorial Canela. The work narrates the passionate vital and artistic history of the key artist in the modernization of Spanish folk music and the renewal of the traditional Iberian music scene.

The CD that accompanies the book provides a global vision of the five decades of work by Eliseo Parra and highlights his contribution to genres as disparate as psychedelic rock, salsa and singer-songwriter compositions

Eliseo has researched traditional Iberian music, has rescued rhythms and instruments and has revitalized the popular legacy to ensure its future viability. The book gives an account of the efforts of this unique artist to remain faithful to his personal and musical principles for more than five decades, in an environment of constant change, hit by changing fashions, the crisis of the cultural industry and the habitual contempt of the mainstream media for Iberian roots music. 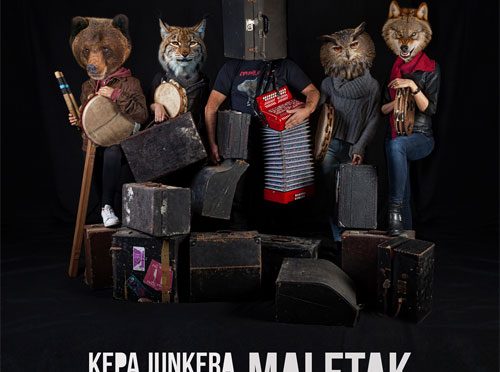 Accordion player Kepa Junkera and his regular companions Sorginak have released one of Kepa’s finest albums in years. Although Kepa Junkera is still known as a virtuoso’s accordionist, he’s also taken an interest in percussion and plays a wide range of percussion instruments. He’s joined by the all-female ensemble Sorginak, who sing and play frame drums.

Maletak (suitcase) makes reference to the old accordion cases Kepa kept in a loft that reminded him of his numerous travels. On this occasion, Kepa and his colleagues explore the folk music and rhythms of the various regions of Spain.

The regions covered include the Basque Country, Castile and Leon, Catalonia, Aragon, Cantabria, Galicia, Castile La Mancha, Asturias and Extremadura. Even though Kepa has composed all the music, he adds more authenticity to the project by bringing in an impressive list of guest musicians representing various folk music traditions.

Kepa follows the lead of Spanish folk music innovator Eliseo Parra, who appears as guest on the album. Parra has been exploring the folk music of the Iberian Peninsula and has reintroduced dozens of traditional musical instruments and rhythms.

As indicated earlier, the album features extensive use of percussion, especially frame drums along with the accordion, Spanish guitars, zanfona (hurdy gurdy), gaita (bagpipe), horns along with many guest vocalists and vocal ensembles.

The extraordinary ensemble of musicians includes Kepa Junkera on accordions and percussion; Sorginak on percussion; Daniel Do Pando on trompa; Ibon Koteron on alboka; Oreka TX on chalaparta; Jose Luis Montón on guitar; Josete Ordoñez on guitar; Antonio Serrano on harmonica; Diego Galaz on fiddle and mandolin; Germán Diaz on zanfona (hurdy gurdy) and Pedro Lamas on saxophone and bagpipe.

Kepa Junkera’s album design always attracts attention. The beautifully packaged CD contains a large horizontal 24-page booklet with lyrics, photographs by Igotz Ziarreta and Santi Yaniz, and a set of 10 cards that are pieces of a jigsaw puzzle developed by Rober Garay and Alberto Palomera.

Maletak is a beautifully-crafted music project by a talented and diverse group of musicians that illustrates the rich diversity of Spanish folk music. Highly recommended.

Buy Maletak in the Americas