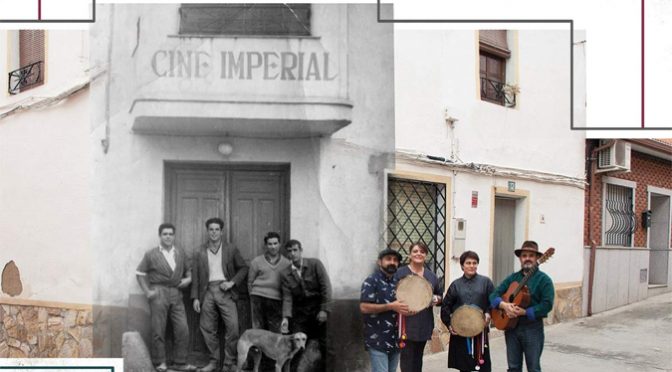 A Tiempo Real – A New Take on Spanish Tradition (ARC Music), the double album by Spanish folk music band Vigüela is the number one album of the the October 2018 Transglobal World Music Chart.

Vigüela has captured the essence of Spanish folk music as performed in village homes, festivities and celebrations in the province of Castilla-La Mancha and beyond. The group performs their materials on folk instruments and kitchen utensils such as guitarros manchegos (small guitars from Castile-La Mancha), castanets, frame drums, the zambomba friction drum, folk guitars, triangles, the bowed 1-stringed rabal, lutes, jars, bottles, mortar and frying pans.

The rest of the chart:

A Tiempo Real – A New Take on Spanish Tradition is an extensive collection of folk songs from the Castilla-La Mancha region in central Spain. The songs were assembled by Vigüela, a group of multi-instrumentalists, singers and folk music researchers who are based in a town called El Carpio de Tajo, in Toledo province.

The massive project is featured in a 2-CD set. The songs include diverse traditional music styles from Castilla-La Mancha and nearby regions like jota, alborada, fandango, Christmas songs, seguidilla, ronda, wedding songs and more. These songs came from village elders, Don Manuel García Matos and Alan Lomax, and various other sources.

The four artists use a wide-range of folk music instruments, including the guitarro manchego (a small guitar), lutes, frame drums, zambomba (friction drum); and kitchen utensils used as percussion such as jars, bottles, mortar and frying pans.

The liner notes are in Spanish and English and describe each song. Lyrics are available as a download.

A Tiempo Real – A New Take on Spanish Tradition is an extraordinary collection of traditional songs from inland Spain that reflect the customs of villagers and farmers during celebrations, religious traditions and other activities.

Buy A Tiempo Real – A New Take on Spanish Tradition 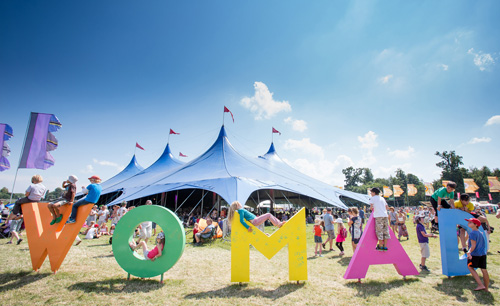 Everyone who loves music needs to make a pilgrimage to the UK’s phenomenal annual WOMAD – World of Music Arts and Dance Festival – founded in 1980 by Peter Gabriel,  womad.co.uk.  To take in a mammoth feast of the world’s greatest music with kindred souls while one with nature in the English countryside is unimaginable pleasure and fun.  In its 35th year it’s a fantastic festival experience – with superlative marks for organization, production, and programming.

Charlton Park, the WOMAD site, is situated near Malmesbury in the midst of the lush, fertile farmlands of Wiltshire County where the daytime light moves swiftly from brooding shadows to brilliant sunlight.  (Wiltshire is locus for Stonehenge and Avebury Stone Circle.) This year’s edition had rain showers and sprinkles with occasional patches of blue skies.  There is no such thing as a raincheck in England.  Wellington boots are de rigeur.  As Simon Broughton, Songlines editor in chief remarked, “WOMAD people are resilient.”  (Songlines Magazine had a huge, cheery tent spanning at least 20 meters across for artists’ cd autographs and magazine sales. It was also the best shelter from rain spells.)

We have nothing like it in the U.S.  WOMAD 2017 took place at the end of` last month from Thursday July 27th to Sunday, the 30th.  100 artists from 50 countries. Huge performance tents  loomed up over the park’s several acres.  35,000 fans including masses of children, all of whom camped out in thousands of tents. (There are also nearby charming cottages if pampering is your style.)  It’s the British spirit of adventure that beckons locals and astounds internationals.  As well as the immersion in fresh-air countryside culture.  Yoga and Tai Chi classes were the mid morning rousers.  Add children’s activities, international cooking classes, music and dance workshops, and scores of food booths with tastings from Goa to Tibet.

However, my goal was to catch some artists rarely if ever seen in the U.S., whom I’d never seen before, and whose recordings I admire.  Here are the standouts.

Based in Castilla-La Mancha (the land of Don Quixote), Vigüela, one of the greatest folk groups from the heart of Spain caught my ear last year with their splendid CD, “Temperamento” (ARC Music).  There are wedding and harvest songs and songs to accompany daily chores – even sheep-shearing music on the recording.  Viguela’s exuberant acoustic WOMAD concert seemed to make the earth sing in joyous, celebratory unison.  The excitement in the crowds was infectious as everyone clapped along to the rhythms with shouts of “Olé!”  I was certain how thrilled the spirit of the late BBC London’s radio presenter, musicologist, and writer, Charlie Gillett, must have been to welcome Vigüela to his dedicated BBC 3 WOMAD stage.

For over 3 decades, the group of 5 has managed to preserve their village songs with all the dedicated finesse and detail that could have been lost with time.  The members played the 12-string bandurria mandolin, lute, rebec fiddle, guitar, friction drum, tambourines, and castanets with aplomb, flair, and camaraderie.  They incorporated some of their recorded percussive ranch household utensils: spoon and pan, glass bottle, mortar, stones, cowbells, sieve, and sheep-shearing scissors.  The air rang with Vigüela’s renditions of sprightly dance music – the fandango, malagueña, seguidilla, and jota.  Strong, melismatic voices enraptured with fervent passion.  Towards the end a couple swirled and whirled to a jota dance song.  The group has injected ancient folk songs with rousingly fresh, dynamic, and revitalized new energies.  Vigüela is triumphant assertion of life itself.  They’re a classic.

The dense mangrove rainforest swamps on the Pacific coast of Colombia are home to most of the 5 million Afro-Colombians in the country.  There, in the small Timbiqui village of 20,000, surrounded by river waters, artisanal mining, hand panning for gold flakes, is one of the main local industries.  And the home origins of Nidia Gongora’s Grupo Canalón de Timbiquí.  Canalón refers to the chute through which earth and gold bits are funneled.  Women sift through and rinse the sediment pourings in river waters in search of gold.  Born in that environment, Nidia Gongora and her early high school mates formed Grupo Canalón de Timbiquí in 2003.

Nidia Gongora now has two musical personae:  her current CD “Curao,” is her first solo album. The recording is a dazzling electronically driven collaboration with British DJ and producer Quantic with an urban Latina feel.  She is better known and recognized as the ringleader of the award-winning, folkloric Grupo Canalón de Timbiquí.  Both styles are rooted in Colombia’s Afro-Amerindian currulao music.

Nidia’s onstage vocal accompaniment featured 3 other women dressed in sombreros and bright yellow and blue ruffled dresses.  They led complex harmonies in call and response choral formation with backing polyrhythmic percussive textures by 4 men players on marimba, and hand and stick drums.  Nidia herself carried and shook the women’s emblematic guasa shaker.  The group performed their region’s syncopated, gently rolling Afro-Amerindian music, sung for generations by village women as they panned for gold, cooked, breastfed, washed clothes in the river, and praised patron saints.  Clearly, the women in Timbiqui society carry the day, bringing musical upliftment and determination, lightheartedness and faith, to what is grueling, tedious work.  Given the WOMAD showers this year, the Grupo Canalon’s repertoire, originating in Timbiqui’s environment of abundant rain and river waters, was a concert consonant and a cleansing festival blessing.

Utterly unorthodox musically, yet exceeding expectations of a powerful performance, Ifriqiyya Electrique delivered a thunderous concert based on modalities of Tunisian ritual trance possession.  Their source lies in the Djerid Oasis region, where marginalized Africans worship the 13th century black Sufi saint, Sidi Marzuq.  The saint was born in Timbuktu, displaced as a captive, and eventually freed due to his prodigious miracles.  Every year over a few days in mid-summer, sacred psychic healing ceremonies known as “Banga” take place, dedicated to Sidi Marzuq.  Spirits (ruwahine) are summoned.  Mesmerized by the incessant beating rhythms amidst clouds of burning benzoin incense, Banga devotees become possessed and fall into convulsive trance. Ifriqiyya Electrique’s concert was a stylized musical enactment of the actual ritual.  Their performance strikes a remarkable balance between the rational and irrational.

Part of the performance impact lay in the screened footage of the live ritual filmed in Tozeur: the percussionists leading the saint’s followers, nodding and weaving, stumbling and falling in wild, ecstatic trance (although the truncated screen needed to have filled the stage as full backdrop).  “Brilliantly conceived,” as Simon Broughton has noted, the performance in its visual and sound totality can make one feel part of the Banga ritual experience.  Following the concert, the percussionists from Tozeur came offstage and as they continued to play their metal castanets, children surrounded them, stepping to their beats in fascination.

Rapture, sheer rapture, was my overwhelming reaction as I watched and listened to Parvathy Baul together with Somjit Dasgupta, who played one of India’s rarest string instruments, the sursringar. I remained captivated by them until their very last notes.

A Bengali Baul spiritual singer and a “sadhak” for more than 3 decades, Parvathy Baul has one of the most beautiful voices today on the Indian subcontinent. She’s a foremost female in the Baul male-dominated tradition.  Her WOMAD repertoire was drawn from yogic Baul mysticism, tracing back 15 centuries and more.  Over time, it has absorbed elements from Sufism, Hinduism, Buddhism, Vaishnavism, and Tantra.

With exquisite phrasing and a palette of nuanced melodic tonalities, Parvathy gave soulful cry to her intense emotions. By moments imploring, by others deeply solemn or merrily elated, she reached blissful completion with each song.  She spun around as she sang, her long streaming dreadlocks splaying forth.  High on mystical divine love, she imparted infinite peace, wresting herself free of earthly attachments.  Her sense of coordination was impressive – simultaneously plucking her ektara and tapping her duggi drum strapped to her waist; ankle bells ringing, she’s a one-woman minstrel band.

Yet it was Somjit Dasgupta’s shimmering, meditative, sitar-like glissandos and bass-pitched sarod sonorities on his sursringar that added luminous dimensions to Parvathy’s presence.  They haven’t recorded together, but they must. They are delirious enchantment.

Just as I was leaving to prepare for my flight back to New York, I noticed masses of Afro Celt Sound System fans, including droves of teenagers and young children cramming the Charlie Gillett stage grounds.  Everyone was dancing in the passing rain shower. Steaming heat rose from the wet grass as those Wellington boots stomped away.  Farther along on the festival grounds, thousands covered the field facing the main Open Air Stage.  More dancing to classic reggae tunes by the inimitable Toots and the Maytals.  In the distance, the festival’s illuminated ferris wheel was glowing like a giant silvery moon. The world was happy.

The CD booklet contains photos and extensive liner notes in English and Spanish.

Temperamento is a fabulous introduction to the folk music of Castilla-La Mancha in southern Castile, the land of Don Quixote, windmills and red wine.

Buy Temperamento – Traditional Music from Spain in the Americas