Stephen Kent – A one-man band didgeridoo/percussion virtuoso, Kent is a pioneer in bringing the ancient Aboriginal Australian instrument to the contemporary world.

Peter Warren – drummer and percussionist, Warren is responsible for Baraka Moon’s dance rhythms. He has performed many years with African musicians and dancers in the U.S. and his native Canada.

Sukhawat Ali Khan is the son of the legendary Indian-Pakistani Vocalist Ustad Salamat Ali Khan. Sukhawat belongs to the school called Sham Chorasi which was established by two brothers – Mian (maestro) Chand Khan and Suraj (son) Khan. They were the court musicians of Akber the Great. Akber the Great was one of the great artistic kings of India. These brothers belonged to the group of nine Jewels of the court.

Sukhawat Ali Khan started his training at the age of 7 and started performing with his father soon after. He toured with his father to England, France, Holland, India, Sri Lanka and America. He has performed at the Columbia University, the Asian Society of New York, The Metropolitan Museum in New York and the Smithsonian Museum of Washington, D.C. Sukhawat Ali Khan has taught music throughout the United States.

Sukhawat Ali Khan now lives in the San Francisco Bay Area and is the lead singer with the Alikhan Band.

“I am so glad to be able to live in this time. Music is becoming the melting pot, a place where cultures cross, boundaries break down. It’s an extraordinary time for communication through music. I hope it continues this way. I hope people reach new understandings of each other through the love of music. We are very small, [Ali Khan] but we can do something, and I believe that that something will count.”

“Each song I do has classical thought behind it and I know how to sing it properly, but my style comes from my life too. I spent time in New York. I go to clubs. I like the hip hop beat, Latin, rave… I’ve toured with Ben Harper, even opened for Jane’s Addiction. I’ve listened to a lot of Bob Marley, Jimi Hendrix, you know, all the classic stuff. I love Nat King Cole’s voice. These people have something that is really exciting. There’s a performing energy there that I also feel. Its the same kind of energy a good Qawwali singer has, and we can really express it freely in America.”

Ali Khan’s singers are heirs to a 500 year lineage of devotional Sufi Qawaali singing, a passionate style made popular by the late Nusrat Fateh Ali Khan.

Although Qawwali is becoming more and more popular, to be considered a true Qawwal (vocalist), one must have extensive classical understanding. Sukhawat Ali Khan and his sister Riffat come from a long line of Qawwals and have been singing all their lives. Their father and his brother were renowned singers in the 60s and 70s, and certainly Nusrat Fateh Ali Khan, who was in the next generation, looked to the Ali Khan brothers for inspiration at the time. The Ali Khan family’s musical lineage can be traced directly back to India’s Moghul Age, where two famed court musicians to Akbar the Great planted the seeds for one of the truly distinguished families in music today.

In 2001, Sukhwat and his sister formed a new band called Shabaz.

Shabaz combined eleven generations of vocal history with a modern global sensibility and the wicked rhythms of the dance floor. Shabaz featured the voices of siblings Sukhawat Ali Khan and Riffat Salamat, the living embodiment of the ancient Sham Chorasi singing tradition. The pair can trace their lineage back to the court musicians for ruler Akbar the Great.

Their father Ustad Salamat Ali Khan was one of the great classical Indian singers and an influence on the legendary Nusrat Fateh Ali Khan. Sukhawat began singing at the age of seven and has performed around the world for presidents and kings. Renowned for his technique and passion, he shared vocal duties with sister Riffat who took Qawwali to places it’s never been before. American multi-instrumentalist and producer Richard Michos, the third member of Shabaz spent years exploring Indian music as both player and scholar.

With influences ranging from Zakir Hussain to Jimi Hendrix and dance music he brings an open Western sensibility to the band’s sound adding the colors and textures of electronic beats, dance, rock and ambient music to create a heady irresistible mix. As the Ali Khan Band, Shabaz (which translates as ‘Chief Eagle’) recorded two albums for City of Tribes. Their 1998 debut Tawsir appeared at the top of the CMJ New World Music chart and Zindagi (Urdu for ‘Life’) their follow-up disc reached similar heights in 2000.

Based in the San Francisco area, they played with artists like Femi Kuti and King Sunny Ade transporting crowds with every gig. They continued to work and shape their sound polishing and refining pushing their unique talents across more musical boundaries from the rhythmic richness of ̶Bhangra, to the experimentation of ̶Chela, where club beats frame intoxicating passionate vocals. They had their unique vision of a true world fusion where continents and histories come together in the music of the dance. As Sukhawat Ali Khan said, “It’s an extraordinary time for communicating through music. Music is becoming a melting pot a place where cultures cross.” 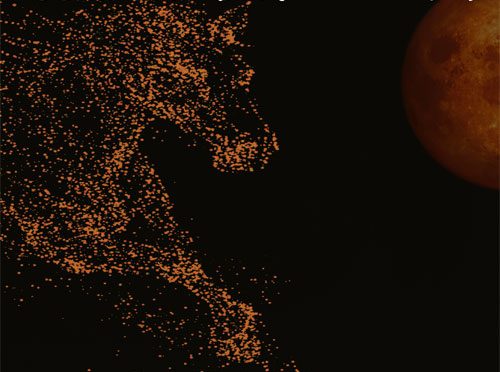 Following up on their 2016 release of Eternal, the San Francisco based Baraka Moon is back to inundate listeners with their particular brand of savage coolness on Wind Horse, available on October 6th on the Baraka Moon Music label. Immersing listeners into a deep sound pool fashioned out mystical Sufi trance, textured Indian ragas, meaty African rhythms and the tangy flavors of Australia’s Aboriginal centuries-old musical traditions, Wind Horse is a deluge of sound that is potent and highly satisfying. With copacetic grooves and delicious dance tracks, listeners just have to ride the easy waves of Wind Horse for an excellent ride.

Wind Horse opens on the winds of the fabulous groove “Bismillah,” before moving onto the guitar slick and meaty rhythmic “Rasa Divine,” replete with some dishy backing vocals. Listeners shouldn’t miss out on the rich and rewarding “Narayane” with Mr. Khan’s vocals surrounded by guitar flourishes and mesmerizing rhythms. “Allah Hoo” is simply kickass good with didgeridoo against harmonium and Mr. Khan’s vocals.

“Sabir” is full of reggae flair, while “Mankuntu” is all quick paced richness. Equally delicious are the didgeridoo and speaking tongues flash of “Julay Julay” the raucous wild ride of title track “Wind Horse” and the lovely serene addition of bansuri flute on closing track “Alap.”

Baraka Moon’s Wind Horse is a magic carpet ride across Indian grasslands, Pakistani’s lazy river banks, African savannas and the rich, red earth packed landscapes of down under. And what a ride it is.

Steeped in a sultry mysteriousness Laaj, or Divine Grace, is the latest offering by musician and vocalist Sukhawat Ali Khan. With previous recordings such as Shukriya, Shabaz, Zindagi and Taswir, as well as collaborations with the likes of DJ Cheb-I-Sabbah, movie composer James Newton Howard, Dr. Das and the band Baraka Moon and the Yuval Ron Ensemble, Mr. Khan has teamed up with bansuri master Deepak Ram, who is known for recordings like Flute for Thought, Searching for Satyam and Prasad. Backed by a group of first rate musicians, Mr. Khan takes the listener on a journey filled with the splendid delights of Indian and Pakistani music framed in with a razor’s edge of contemporary sensibilities so the music so that the music comes across as dreamily cinematic.

Mr. Khan isn’t merely content to wow fans with his vocals or harmonium playing, opting instead to flex his musical prowess by singing in Urdu, Punjabi, Hindi and Pashto on Laaj in tracks that range from Sufi hymns to Ghazal laments to traditional folk songs of Afghanistan. A master of the five traditions of Indian and Pakistani music: Hindustani Classical, Sufi Qawwali, Punjabi Folk and Bhangra, Geet and Ghazal, Mr. Khan dazzles on Laaj by conjuring up a sound that is simply intoxicating.

Threading tracks with the sinuous lines of Mr. Ram on bansuri, Mr. Khan crafts his sound with the help of Gurdeep Hira on table, dholak, dhol, shiana, vocals and keyboards; Aaron W. Shaul on cello, electric and double bass; Daljeet Singh on guitar and keyboards and Charles Moselle on saxophone to fashion a sound that is lush and full-bodied. Laaj opens with the lovely mystery of “Ghulam-E-Ali,” a traditional Sufi hymn in honor of Hazrat Imam Ali.

With soaring vocals and a meaty, deliciously dark undertone, Laaj give way to delicious indulgences like the guitar edged “Heer,” “Raste Juda Juda” with its plumy bansuri lines and its thread of joyful exuberance and the darkly edgy Hindi track “Chingari” from the motion picture “Amar Prem.” Fans get a dose of Bhangra with “Thand Lagdi” and “Kacha Dudh,” while tracks like “Door” and the Afghani folk tune “Anaar Anaar” shimmer with a luxuriant soulfulness.

Laaj is evocative, potent and enchanting and well worth diving headlong into.

Buy the digital version of Laaj

As a young musician, Sukhawat is also influenced by contemporary popular sounds. He uses bhangra and world beat sounds, in addition to the funky electric bass played by African musician Baba Ben Okulolo, to enhance his music.

While some of the pieces are upbeat and festive, combining South Asian percussion with African drums, some of the best material on the CD are the two dreamy cuts titled “Natnarayani (part 1) and (part 2). Sukhawat’s intimate style, accompanied by a hypnotic drone and strings brings the listener a soothing feeling of calm and peace.