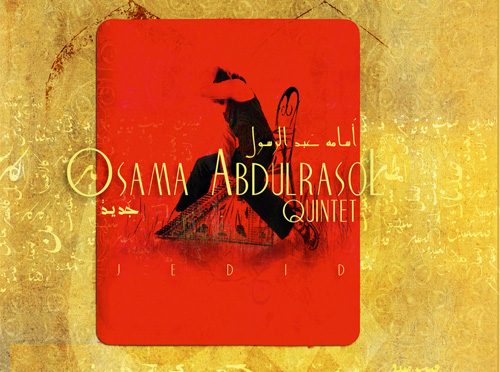 Jedid is an excellent album by Belgium-based Iraqi qanun maestro and composer Osama Abdulrasol. His quintet features Belgian and Canadian musicians who come from the classical and jazz music fields. So it’s no surprise that Jedid is a fabulous mix of Arabic, jazz, classical, Sephardic and other music influences.

Formed by professional musicians from several countries (Syria, Egypt, Morocco and Spain) and under the direction of Abdel Karim, this ensemble has the purpose of studying and popularizing Arabic classical music.

Its repertory includes music from throughout the Middle East, from Turkey to Egypt, ranging from the 16th to the 19th centuries. Abdel Karim Ensemble also performs Andalusian Arabic music, a genre that originated in Al-Andalus, Islamic medieval Spain, where it was cultivated as a poetic-musical form known as Muwashaha.

Andalusian Arabic music has been preserved not only in the Magreb (Morocco, Tunisia, Algeria and Libya) under the name of Andalusian Music, Maluf, etc, but ratherit has had great influence in the countries of the Middle East such as Syria, Lebanon, Egypt, etc.In these countries, Andalusian music has been cultivated with great zeal and without hardly changes to the tradition of the Muwashaha, conforming the nucleus of the Arab-Andalusian Music of the East, called this way in memory of its origin.

This Eastern Arabic cultured music tradition must be distinguished from the one preserved in the Magreb by its musical, rhythmic and literary differences.This repertoire can be regarded as early music and classical music, born in parallel with the Baroque and classicism of the Western musical tradition. Its language is, therefore, of an enormous wealth, unlike Andalusian music, which uses scales that are very close to western music.

One can point out the use of the quarter tones, perfectly written within a very complex modal system called Maqam, as well as subtle rhythmic formulas called wazn, of difficulty that parallels its beauty.

The instruments used have been around for centuries in Arab countries: the Nay (Arab reed flute), the Kanun (Arab zither), the ´Ud (Arab lute) and the percussion characteristic of this music: Darbuka, Bendir and Riqq, presided over everything for the melodious voice of the Mughanni (singer) that weaves with skill the feeling of the music with the refined beauty of the poetry.

At the end of the 19th century European bowed instruments began to be adopted. First it was the violin and then the cello and double bass, performed with a different, perfectly coordinated with the traditional instruments.

Although he started from a solid classical training, soon he went searching for music rooted in the past, such as music from the Middle Age, the Renaissance, the Baroque period or Arab Classical Music, learning from Moroccan masters in Tangier and TetuanDamascus (Syria), Spain, Italy, etc., and performed these styles in ensembles such as “The Earth is Flat” (Medieval Music), “Neocantes” (Renaissance) “Lúdicus Consort and Divertimento Musicale” (Baroque) and Al-Baraka (Traditional Music of the Middle East and The Magreb).

Abdel Karim has learned the Maqam (Mode), Wazn (Arabic rhythmic patterns), the technique and interpretation of the Nay with the noted specialist in Middle Eastern music Noureddin Acha, in Tangier. He has also received classes from Ziyad Qadi Amin, (Ensemble Al-Kindi) considered the best nayati (nay player) of Syria.At the moment he is deepening the knowledge of this fascinating art with diverse Arabic music specialists. He was director and professor of the Municipal Classroom ofMusic of Aracena, 1992-96 in the subjects of transversal flute and recorder flute.Abdel Karim was the founder and director of the Festival of Ancient Music of Aracena (Huelva) 1994 to 1998, as well as coordinator of the First Festival ofAncient Music of Ubeda and Baeza.

Abdullah Chhadeh is one of the Arab world’s most innovative qanun players. He has re-designed the traditional oriental instrument by the addition of an octave, which enables him to play a wide variety of Middle Eastern classical music, from the Turkish, Azerbaijani, Persian, Arabic and Andalusian repertoire.

Born in Damascus in 1968, Chhadeh was raised in a camp for refugees from the Golan Heights and was schooled there. He later studied Mathematics at Damascus University. Chhadeh also studied at the Damascus Musical Conservatory, where he specialized in both Eastern and Western Classical music, and graduated with a degree in 1997.

He studied composition at the Guildhall School of Music and Drama in London, from 1997-1999, with Adrian Thorne and Malcolm Singer (Head of the Menuhin School of Music). Trained in western classical music, he has performed his adaptations of works by Vivaldi, Bach, Handel, and Mozart for the qanun with both chamber and symphony orchestras, in the Arab world and in the West.

He is a talented and rigorous composer. His compositions for qanun were performed by himself and broadcast on BBC World Service Radio.

His composition for Symphony Orchestra had its world premiere performance in 2000. He regularly plays as a guest performer with Classical, Jazz and World Music groups.

In 2001 he formed the ensemble Nara, which plays principally his own compositions. The band’s first album, consists of material recorded live during its set at 2001’s WOMEX world music trade fair in Rotterdam.

Abdullah sees Nara as a flexible ensemble which can invite guests to perform with it; at Rotterdam singer Natacha Atlas made a guest appearance, joining Chhadeh’s qanun, Matthaios Tsahourides’ Pontic lyra, Bernard O’Neill’s double bass and the Kurdish percussion of the three Zahawy brothers.

Syriana was described as a dialog between East and West, where ancient civilizations vye and blend with iconography from spy novels, 1960s television themes and Cold War film soundtracks.