Ulla Pirttijärvi is one of the most significant Sámi artists, born in
the village of Angeli, Finland. She began her career in Angelin Tytöt.
Ulla founded the band Ulla Pirttijärvi & Ulda and performed with Frode Fjellheim, Snorre Bjerck, and Wimme Saari among others.

Ulla and her daughter Hilda Länsman created the group Solju in 2015 and they participated in Finland’s Uuden musiikin kilpailu (Finnish selection for the Eurovision Song Contest) with the song “Hold Your Colours”.

Composer, producer, researcher and ethnomusicologist Pekko Käppi was born in 1976. He is a jouhikko player from Tampere and a part-time instructor at the Sibelius Academy.

Finnish band Pauanne explores the pagan traditions of Finnish folk music. The trio has uncovered and collected long-lost folk music that includes stories of spells and curses, the dreams of a shepherd, 17th century witch hunts and magical iron fences that repel invaders.

The trio includes Kukka Lehto on violin; Tero Pennanen on Hammond organ and other keyboards; and Janne Haavisto on drums.

Markku Lepistö, from southern Ostrobothnia, is one of Finland’s most dynamic accordionists, having been playing folk and dance music since age five.

A graduate of the Sibelius Academy Folk Music Department, where he studied kantele, woodwinds, double bass and fiddle, Markku was a member of the now defunct ensemble Pirnales, has played with the group Progmatics, more recently in a duo with Aldargaz mandolinist Petri Hakala and in the klezmer group Doina Klezmer. Markku joined Värttinä just before the Vihma recordings.

Kimmo Pohjonen is one of the most respected and in-demand musicians and performers in Finland. An accordionist of exceptional ability and imagination, Kimmo’s musical history goes back more than twenty years in rock, folk, avant-garde, improvisation, classical, dance and theater music projects.

He was born in 1964 and began playing accordion at age 8, playing dance music, folk music, later classical and rock music. He studied Classical Music at Helsinki Conservatory 1980-1985. He later studied at the Sibelius Academy Folk & Classical Music Departments in 1985-96. In addition, he studied at Bagamoyo College of Arts, Tanzania, off and on, 1985-92; and in Buenos Aires, Argentina, 1994. He has worked as teacher of accordion at Sibelius Academy and in the USA, Sweden, Denmark, and Holland.

Pohjonen was named “Folk Musician of the Year” in Finland in 1996, 1997, and 1998. He has played in over 75 different albums in the past years, including Finnish folk music group Ottopasuuna, duo Pinnin Pojat with JPP’s Arto Jarvela, and rock band Ismo Alanko
Säätiö. Pohjonen has also performed music for theater, ballet and modern dance.

In 1996 he embarked on a solo career with his solo 5-row accordion project, featuring extreme and original compositions, live loops and effects, a dynamic and animated stage performance, orchestrated lights and surround sound. This show received instant massive worldwide critical acclaim at WOMEX Berlin in 1999 and led to continuous work with his many projects all over Europe, North and South America, Israel, Russia and Japan to rave response.

In 2000, Kimmo received a five year composer/artist grant from the Finnish state and he was named “Accordionist of the Year” for 2000 and 2001 in Finnish Jazz magazine Jazz Rytmit.

The Manipulator project was created in 2002, with multimedia artist Marita Liulia. It was performed in Helsinki, Sweden, and Belgium. In Helsinki it was 6 hours of improvised performance on each of three days, with a total 18 hours.

Pohjonen composed and performed, with Kluster, music for the UK short film “Flickerman and the Ivory Skinned Woman”.

In 2004, Kluster collaborated with Pat Mastelotto and Trey Gunn of King Crimson, and with Kronos Quartet.

Out of the collaboration with Pat Mastelotto and Trey Gunn came KTU, a live band featuring Trey Gunn on Warr guitar, Samuli Kosminen on vocals and accordion samples, Pat Mastelotto on drums, Kimmo Pohjonen on accordion and vocals, and Heikki Iso-Ahola as sound designer.

Kardemimmit is a quartet band of four remarkable women playing the Finnish national instrument, kantele (lap zither). The ensemble was formed in 1999 in the musical institute Juvenalia in Kardemimmit’s home town Espoo, in southern Finland.

The ensemble’s members are Maija Pokela, Jutta Rahmel, Anna Wegelius and Leeni Wegelius. The four musicians were attracted to folk music even though they also liked playing others types of music.

Kardemimmit creates and manages its own music. The artists compose, arrange, write lyrics and produce their recordings.

In 2004, the four musicians attended the influential Kaustinen Folk Music Festival. They got to see two of the finest Nordic bands, Väsen and Värttinä.

The group has released several album, including Viira; Kaisla; Autio huvila (Abandoned Villa), selected Finnish folk album of the year 2012;Onni (Happiness); and Kesäyön valo 2018. Kaisla was reissued in 2012 as The Rough Guide to the Music of Scandinavia compilation’s bonus CD under the title Introducing Kardemimmit. 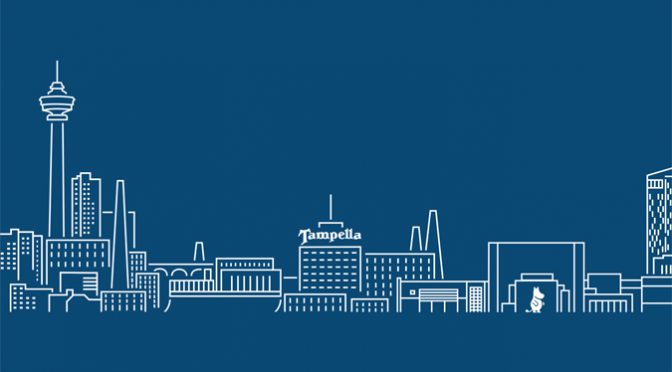 Music Finland announced this morning that WOMEX, the World Music Expo 2019 will take place in Tampere, Finland. The 25th edition of the world’s leading conference and showcase festival for global music will be held October 23-27, 2019.

Together with Piranha Arts, Womex 2019 will be managed in Finland by Tampere-based music company Rockadillo Production as the main local partner. “It is absolutely great to have WOMEX 2019 finally in Finland, and especially in my hometown. All local partners from the City of Tampere, Visit Tampere and Finnish Ministry of Education and Culture to the staff at Tampere Hall and other venues as well as Music Finland have shown strong motivation and determination to make it happen, so we aim to create a nice and compact, participant-friendly experience in Tampere“, said Rockadillo Production’s Managing Director Tapio Korjus.

Tampere is the 3rd largest city in Finland and a multipurpose music hub: it is the home for numerous high-quality festivals, events and music companies.

Wimme Saari, better known as Wimme, was born in 1959 in Kelottijärvi, Enontekiö. Wimme is a modern interpreter of the Sami yoik, combining colorful grittiness of traditional yoiking elements with original improvisations. In the last few decades yoik in general has undergone some changes; in fact Wimme’s yoiking could be called free yoik. In his yoik, he constructs intense, clear melodic arches and stretches his voice from a sweet falsetto to a grave baritone. But the old yoik is still there: Wimme has recaptured the essence of the ancient yoik, and even the clever voice technique of the animal yoiks.

“My yoiking has some elements of the old style yoiking, such as the voice technique and the throat technique. I can also do some traditional yoiks, but accompaniment doesn’t quite suit them. When I yoik and the boys play I have to do something new. Colors and patterns are emerging in my mind I have to let them guide me. In my home area people say that I have created a new style. Young people, of course, like it most, but even people in their 50s have come to me to thank me.”

The art of yoiking has traditionally been transferred through generations of oral tradition, but Wimme learned the tradition in a more modern way. “I started working at the Finnish Broadcasting Company in ’86. There I found some tapes including tapes of my uncle’s yoiking. With the help of those tapes I learned some of the old tradition. Although my mother comes from an old yoiking family, the direct connection from one generation to another had already been broken. Due to religious fundamentalism there was no yoiking at home. In border areas like ours, where there are a lot of people other than Sami folks, yoiking has had a tendency to vanish, but in Sami areas like Kautokeino, naturally it has been able to survive better.”

Piirpauke, led by Sakari Kukko, has been a pioneer of world music for many years. Sakari Kukko is a visionary, world traveler and multi-instrumentalist from Finland. When he formed the first line-up of Piirpauke he was immediately awarded with a hit. Since that first success with a poignant Karelian folk tune, Sakari has guided his ever-improving line-ups on musical journeys through the Balkans, Turkey, Africa, Latin America and points in between.

Since attaining accolades as one Finland’s top jazz saxophone players in the early seventies, Sakari has steadily added to his array of flutes and woodwinds on his world travels – and he’s also an accomplished keyboardist. The countries he has roamed for exotic musical inspiration are too numerous to mention, but he has resided both in Colombia and Spain.

While taking a temporary leave of absence from Piirpauke and playing with an another international line-up in Spain a few years ago, Sakari was enthralled by the rare beauty of Andalusian vocalist Cinta Hermo. She was spirited to Finland just in time to be featured on some tracks of Piirpauke’s Algazara album and with her soulful voice blending perfectly with the eclectic melodies, it was decided that she should become a permanent addition. With Cinta’s vocals as another focal point, Piirpauke added new dimensions to its many-faceted forms of instrumental fusion. A notable but natural change also occurred in Spanish having become the band’s main language both in song and in communication between the current members, as the fiery Senegalese percussionist and singer Ismaila Sane, who joined Piirpauke in 1989, had been living in Spain long enough to become a Spanish citizen and Sakari speaks it fluently, of course.

After the release of the 1991 album Tuku Tuku, Piirpauke operated as a trio consisting of Sakari, Cinta and Ismaila with occasional guest appearances from people like Turkish percussionist Okay Temiz. They felt that the trio format gave all of them a lot of possibilities to showcase their amazing talents and virtuosity.

In 1994 Piirpauke celebrated the band’s 20th Anniversary with a major tour that also featured old members Hasse Walli on guitar and Antti Hytti on bass. In January 1995 Piirpauke was the first Finnish band ever to play a MIDEM concert in Cannes, France. This led to a licensing deal with Spanish label Horus for a compilation CD called Cinta Hermo y Piirpauke: “Arbole”, which was released in Spain in May 1995.

In 2003 Piirpauke featured Sakari Kukko on sax, Ismaila Sane on percussion, Ville Herrala on bass and Joonas Ahonen on piano. A new album, Laulu Laineilla was released on January 2003.

Piirpauke 30th Anniversary album Ikiliikkuja – Perpetuum Mobile, a compilation of past years, was released on October 2004. The band’s 30th Anniversary concert was hold on 8th October at Savoy-Theater Helsinki and was a big success.

Ville Ojanen is a crossover violinist andcomposer from Finland who uses the folk tradition to create new sounds and ideas. Ojanen is a musician who could be characterized as a chameleon in the field of Finnish folk music. During last twenty years he has led his music into several new directions.

In this musical soundscape traditional acoustic instruments are in interaction with modern technology of our time. Together they create a contrasting tension which very well characterizes the nature of Villes’ music.

Ville Ojanen was born in 1972 in Kaustinen. He started to play violin in 1979 with Juha Kangas as his first teacher. “Besides classical music I studied folk music right from the beginning.”

In 1981 he continued violin studies with Mauno Järvelä as his teacher. Throughout the 1980s he played in various bands: Troka, Folkkarit, and Ottoset. Troka won a competition for Finnish folk bands in 1993. That same year, Trokas’ debut album rose to seventh place in European folk music chart.

In 2003, Ville received a grant to compose material for his first solo album. The debut album titled Rautavaara wass released in 2005.