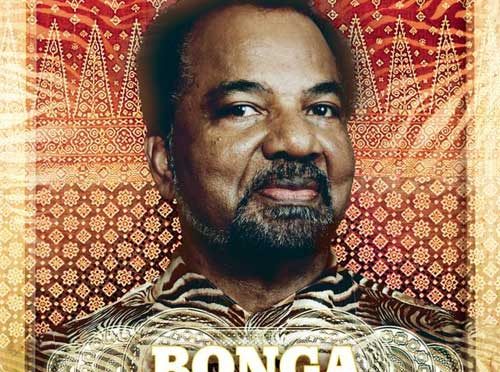 Angolan singer-songwriter Bonga is one of the great artists of the Portuguese-speaking world. His new album, Recados de Fora (Messages from Elsewhere), released this week, is a musical voyage across Atlantic Africa, the Caribbean and Brazil. You’ll find irresistible Angolan semba along with passionate Cape Verdean morna, Portuguese fado and laid back son Cubano (Cuban son).

On Recados De Fora, Fora sings about post-colonial life and struggles in Angola, as well as love and a tribute to a dear friend, journalist Remy Kolpa-Kopoul who passed away.

Recados De For a showcases the talent and charm of a globe-trotting artist with a unique voice and interest in Atlantic cultures.

Waldemar Bastos is one of the best known artists from Angola. He’s been living in Portugal for the last years, working with musicians from various backgrounds. His style is characterized by warm laid back sounds, sung in Portuguese, combined with powerful Congolese-style guitars.

”My music arises out of paradox,” says Waldemar Bastos . ”I am a professional musician who barely studied music, an African performer whose first album was recorded in South America, an artist from a war-torn country whose principal themes are peace and optimism, a singer/songwriter who is considered to be the voice of Angola, although I presently live in Portugal.”

Waldemar Bastos was born in Angola, on the border with Congo, in 1954. ‘Five centuries of colonization meant that when I was growing up I heard songs from many different cultures,” he explains. In addition to the African sounds he absorbed, he heard Brazilian music and cites the Beatles, Nat King Cole, the Bee Gees and Carlos Santana as early influences.

Bastos grew up in a country wrecked by war. First, a war of liberation, which began in the early 1960’s and ended in 1974 with the overthrow of the Portuguese dictator Salazar, and then a civil war that lasted for many years. Although both sides in the civil war tried to claim his music as their own, he refused to be drawn into partisan politics, instead offering a message emphasizing the value of all life, the beauty of the world, and the need for hope.

Nevertheless, the political climate in the newly independent country was not supportive of artists. The communist government was even more repressive than the colonial government it had replaced, and Bastos came to feel that he was in potential danger. In 1982 he defected from a cultural delegation visiting Portugal. For a time he lived in Brazil and later in Paris, and he now makes his home in Portugal.

After Angola became independent, Bastos began to write his own songs, in which African guitar-pop is laced with Brazilian and Portuguese influences. He recorded his first album, Estamos Juntos (We’re Together), in Brazil and two more, Angola Minha Namorada (My Sweetheart Angola) and Pitanga Madura (Ripe Pitanga Berry), after his return to Portugal.

Pretaluz (Blacklight) was recorded in the United States and released by Luaka bop. Pretaluz features Angolan and Portuguese musicians.

In April of 2003, Bastos went back to Angola for the first time in many years to perform in the national stadium in Luanda, the capital, in celebration of the ending of years of civil war. Since then he returned half a dozen times more, ensuring that the spirit of his African roots remained a powerful influence on his music.

His 2012 album Classics of My Soul features Derek Nakamoto on keyboards, Mitchell Long on guitars and The London Symphony Orchestra.

The message that Bastos brings to his audiences merges the suffering of his people and a longing for home with optimism and the power of love.

Lulendo was born in Maquela do Zombo, in the province of Uige in Angola. His musical initiation was twofold there: in Luanda, where he grew up, he used to sing in choirs, and in Maquela do Zombo, his grandfather taught to him the bakongo traditions and rituals as well as the practice of the likembe instrument.

In 1982, he moved to Paris where he became a studio and stage backing vocalist. In 1993, he started his own band and recorded his debut album ‘A qui profite le crime?’ in 2000.

Gato Bedseyele was forced to flee Angola in 1986 and now lives in Belgium. A founding member of the Angolan group Afra Sound Stars, he left his war-torn country with just $50 USD in his pocket after deserting the army.

Gato had been forcibly recruited several times, the first time aged 12. Believing he was wasting his life, he headed to Brazil, Portugal and then Belgium.

He struggled in exile. “Music has allowed me to survive. I don’t know where I’d be without it.”

A songwriter and multi-faceted musician, Gato sings in Portuguese, French, Kikongo and several other languages. He has made several albums, and played with Brazilian star Gilberto Gil, and Angolans Bonga and Felipe Mukenga.

He had hoped to study, “to become somebody, maybe a journalist or a lawyer“. Now Gato wants to see refugee children complete their studies and ‘have dreams for the future“.

The hardships an immigrant faces in a new country include integration, long working hours, xenophobia. A new immigrant looks for work to earn money and send it back to the family he left behind.

He is now part of the Sairy Band, a group formed by African musicians from many different countries led by Malagasy musician Miary Lepiera.

Helder Tavares, better known as Derito, was born in Angola, in the city of Benguela, and now lives in Portugal.

The author, composer, singer and guitar player, began performing in 1977, in Benguela (Angola), and in October of 1985 began a professional career in Lisbon.

In July of 1995 Derito’s first solo album, Saudade, came out. It was the consummation of his dream.

Derito’s experience performing for TV outlets prompted him to compile a video tape, presented at EXPO-98 in Lisbon.

Recantos de Angola is a collection of the best compositions of his two CDs, incorporating images of the rare Angolan beauty. Derito is the Angolan artist with more videos in the market, and that contributed to the quality of the compilation. He won the video of the year awards with the composition “Intumba” from his second CD Alison.

Derito & Kissange is a innovative project in the Luso-African artistic medium, with a cultural proposal distinct, based on the preservation of the musical basis from Africa, looking for an approximation to the universals standards, without compromising the origin.

The recording of his third CD, was made in Portugal, South Africa, Brazil, France and USA, between August of 2001 and November of 2003.

Bonga is one of Africa’s most inspirational musicians and part of the rare type of artists whose art derives its power from social and political upheaval. This Angolan legend recorded his first albums during his country’s struggle for freedom from Portuguese rule in the early 1970s. He has earned his place along side artists such as Fela Kuti, Thomas Mapfumo and Miriam Makeba as an advocate of the independence of Africa.

Angola 74, Bonga’s second album, was recorded during his exile from Angolan and Portuguese authorities. Much like Angola 72, Bonga’s first record, Angola 74 was dedicated to those who fought for freedom in Angola. Bonga’s first two recordings breathed new life into traditional Afro-Portuguese musical expression and opened the door for ancient ideas from Angola’s past to become revitalized ideals for the future. For many years Angolan’s had ignored or suppressed their native music as the effects of a colonial mentality wore on traditional music it faded from popularity.

Bonga’s main music style, semba, has ancient roots and served as the foundation for samba when it was exported to Brazil via the slave trade in the 18th and 19th centuries. A lilting and engaging form of music, semba blends drums, scrapers, rattles and other percussion with the melodies and strings of Portugal.

Angola 74 is elegantly sparse, using minimum instrumentation and achieving maximum results. In later years Bonga expanded his lineup incorporating more horns and electric instruments experimenting with new sounds and methods of creating music. Angola 74, like Angola 72, represents the invigorating purity and subtlety of expression in Bonga’s early work and serves as a clear affirmation that in many case’s less is undeniably more.

Bonga’s personal history is strewn with triumph and tragedy. Born 1943, he grew up in a working class community on the outskirts of Luanda, Angola’s capital. At birth he was given the Portuguese name Barcelo de Carvalho but changed it to his traditional Angolan name as he grew into a stronger political consciousness. Barcelo de Carvalho became a national hero. A gifted runner he was the 400-meter champion of the Portuguese national team, as well as a soccer star on Lisbon’s Benfica squad.

During this time however, Portuguese officials did not fail to notice that his fermenting political resistance had started to sweeten throughout his rise as a sports hero. Just before Bonga recorded his first album he was forced into exile settling first in The Netherlands and later moving between other European cities for a number of years. His music became a rallying cry for his people and a symbol of resistance. The lyric speaks of literal emancipation while the music symbolized the need for cultural pride.

Angolan independence was achieved in 1975 and Bonga finally returned to his homeland. The victory over Portugal turned out to be just the beginning of Angola’s problems, however, as internal power struggles created one of the longest running civil wars in African history.

Since the early years of these first two recordings, Bonga has gone on to produce a number of successful and critically acclaimed albums. He toured extensively. Practically a household name in Africa and Europe, Bonga has created a highly respected body of work that is marked by the unique power of his voice and his ability to cling to his convictions no matter how staggering the opposition.