Lincoln Center’s White Light Festival treated New York to a spectacular performance of the 7th century classic Arabic Bedouin tale of impossible love, “Layla and Majnun,” October 26-28.  There are numerous secular and mystical versions of the legend all over the world, once described by Lord Byron as  “the Romeo and Juliet of the East.”   Over centuries, two key poets in world literature popularized the story throughout Central Asia, the Middle East, and beyond.  The story has become renowned and celebrated in the history of literature, visual arts, cinema, and music in many diverse cultures.

The 12th century Persian poet, Nizami Ganjavi, whose epic poem of close to 5000 distichs rends the heart with the immense agony and longing suffered by Layla and Majnun, the two hapless protagonist lovers in the story 1. Their union is forbidden by their parents due to the all-consuming love madness of Majnun (meaning “possessed”).  Nizami’s version eventually influenced the 16th century Azerbaijani poet Muhammad Fuzuli’s version.  In turn, the Azerbaijani composer, Uzeyir Hajibeyov, borrowed Fuzuli’s work to create the Middle East’s first opera that premiered in Baku in 1908.  Considered a national treasure in Azerbaijan, the 3½ hour long opera is still performed at the Azerbaijan State Opera and Ballet Theater every year as the season-opener.

Through collaboration between the Mark Morris Dance Group, the Silk Road Ensemble, the late British artist, Howard Hodgkin, and Azerbaijan’s famed singers Alim Qasimov in the role of Majnun, and his protege daughter, Fargana Qasimova as Layla, Lincoln Center’s presentation was a finely wrought synthesis of the theme story in music, dance, and visual art.

Intense and fast-paced, the performance is based on Hajibeyli’s opera score and the libretto on Fuzuli’s poem, Leyli and Majnun.  Lasting just over 65 minutes, the original opera has been transformed into a chamber piece as a suite arrangement in 6 parts.  It opens with a prelude medley of traditional Azerbaijani love songs, sung by Kamila Nabiyeva and Miralam Miralamov who play frame drums, while accompanied by players of kamancheh spike fiddle and tar lute.   As an overture, the introduction foretells the passion, despair, and unbearable pain to come.  They set the tone for the complexity of the drama to unfold, the desperate yearning by two separated souls in quest of love and union with each other.

Mugham is a branch of the large maqam tradition cultivated in the Middle East and Central Asia.  An improvised modal music, mugham historically has been performed by a mugham trio that consists of a singer playing gaval (frame drum) and two instrumentalists playing tar (lute) and kamancheh (spike fiddle).  Mugham remains a precious part of the traditional music heritage of Azerbaijan.  Since the early 20th century, mugham also has become the main source of creative inspiration and experimentation for Azerbaijani composers…. In 2003, UNESCO recognized Azerbaijani mugham as a Masterpiece of the Oral and Intangible Heritage of Humanity 2.

In concert with the featured star vocalists, Alim Qasimov and Fargana Qasimova, seated on a low dais center stage,10 musicians expand the traditional mugham trio formation.  On a diverse instrumental mix of kamancheh, tar, shakuhachi, pipa, hand percussion, two violins, viola, cello, and bass – they are true to the Silk Road Ensemble vision of global cultural cross-pollination and musical dialogue.  Theirs is a grand symphonic expression of the story, illuminated by rapidly changing passages of pathos, glints of joy in hope, sorrow.  Theirs too is delicacy and elegant refinement.

To hear the opening strains by the string musicians is to be transported to a realm of contemplation of the soul.  They tug at your heart, gently.  With a shift in tempo, all musicians join in, allegretto, and with urgency.  The symphony swells, bearing the powerful melismatic wails of Majnun.  Layla begins to lament, sob, and weep. The dancers whirl, swoop, and leap in rhythmic counterpoint movement with the orchestration.  So begins the impassioned, doomed dialogue between Majnun and Layla, musically alternating with instrumental passages.

Although on one level this is a tragic secular story of unrequited love, the entire performance narrative carries mystical overtones of Sufism.  Sufis have long interpreted the love story as a reflection of love for God.  In allegory, Majnun symbolizes the Human Spirit longing for the Beloved or Layla as Divine Beauty.

Majnun strives to realize “perfect love” in Layla, a love that transcends sensual contact with the beloved, a love that is free from selfish intentions, lust, and earthly desires. Precisely for this reason, many commentators have interpreted Nezami’s Laili and Majnun as a Sufi (Islamic mystical) allegorical narrative, where the lover seeks ultimate union with, as well as annihilation in, the Beloved (i.e. the Divine or the Truth). Majnun’s harsh life in the desert, then, has been compared to the ascetic life of Muslim mystics who rejected earthly pleasures and renounced worldly affinities 3.

There is also deeper meaning in the Azerbaijani mugham itself.  The musical experience is meant to bring about a transformation of consciousness.  Aida Huseynova has commented: “Mugham is about a catharsis.  You go through suffering and you purify your soul.  You come to some new phase of your development as a human being.  And this is the main meaning, spiritual and philosophical, of mugham.  Mugham is just not music, it’s a philosophy 4.”

A universal epiphany occurs in the ending death of Layla and Majnun – their ultimate union with the Beloved Divine.  Like a jewel, the facets of the performance still shine bright in memory.  I still haven’t decided if I felt that the performance as a suite composition could have been longer or whether I wished to be caught in its spell for just a few more minutes.

Alim Qasimov, born in 1957 in Shamakha is an Azerbaijani musical legend, revered as one of the five best singers of all time. Qasimov is known for his work in traditional Azerbaijani music and more specifically his renderings of mugham and ashiq.

Mugham is a traditional, or classical, musical style which has its origins in the Caucasus and the Turkish-speaking peoples of Central Asia. The word mugham itself derives maqam, denoting the modus in Arabic music, The notion of mugham also applies to the performers: the singer, and the ensemble. Within the latter you’ll always find three instruments: the tar (lute), the standing kamanche (violin) and the daf.

Ashiq, the rural bardic tradition that is found in Turkey, Azerbaijan and the Azeri region of Iran.

Qasimov has released several albums, toured the world’s most prestigious venues and festivals and in 1999, won the prestigious UNESCO Music Prize, one of the highest international accolades that a musician can hope for. Previous laureates have included Dmitri Shostakovich, Leonard Bernstein, Ravi Shankar and Nusrat Fateh Ali Khan.

Alim Qasimov has also participated in Yo-Yo Ma’s Silk Road Project, a celebration of the art and culture of the ancient Silk Road.

Fargana Qasimova, Alim’s daughter, has absorbed her father’s musical gift, and is well on the way to becoming a great singer in her own right.

In 2019, Qasimov released an avant-garde album titled Awakening, together with French serpent (a serpentine predecessor of the tuba) and bass player Michel Godard. Awakening includes Alim Qasimov on vocals and frame drum; Michel Godard on serpent and bass; Salman Gambarov on piano; and Rauf Islamov on kamancheh. 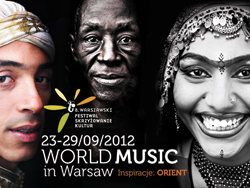 In September, world music returns for the 8th time to Warsaw’s city center. This year’s theme for the Cross Culture Festival (Warszawski Festiwal Skrzyżowanie Kultur in Polish) is: ‘Inspirations: The Orient’. The Polish capital will host artists from eleven countries, presenting fascinating cultures from the East, from Central Asia to the Far East. Cross Culture Festival will take place between September 23 and 29, 2012.

The event with different expressions of Asia will be completed by a special film program, prepared for the first time in collaboration with Planete Doc Film Festival.

During seven days, the festival tent will stand in the center of Warsaw, by the Palace of Culture and Science. Some of the most famous and renowned musicians from the East will perform there. At the invitation from Stołeczna Estrada, the star ensemble of the festival in 2012 will include artists from Armenia, Azerbaijan, Georgia, India, Japan, Korea, Russia and Syria.

“We will welcome excellent vocalists, virtuosos of traditional instruments, soloists, as well as groups of dancers, singers and musicians,” says the press release. “Among them three cross-generation concerts: Alim Qasimov and his daughter Fargana will perform mughams – classical songs of Azerbaijan, Jivan Gasparyan and his grandson Jivan Junior will present the power of Armenia’s duduk. The group Ayarkhaan from Yakutia, Russia – Albina Degtyareva and her twin daughters will sing songs calling upon natural powers and play khomus.”

The artists invited are living legends and ambassadors of their cultures. In their art, they refer to popular customs, rites, beliefs and mystic. Cultivating the centuries-old traditions, the musicians look after the identity of their regions and communities, revive it and save it from extinction, while at the same time searching for new forms and sounds for it. Inspirations: The Orient is an encounter with real Asia, rooted in tradition but going through significant changes.