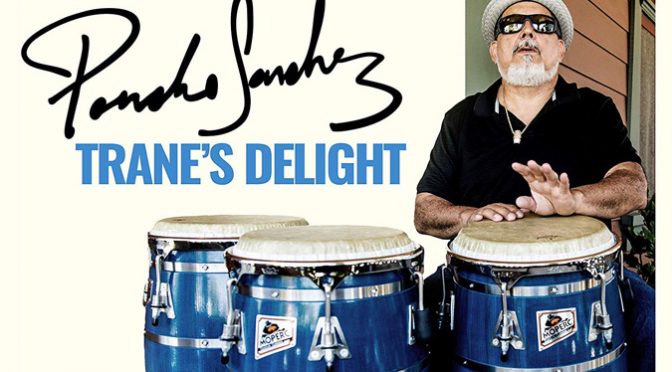 “I’ve always loved John Coltrane,” Sanchez says, “ever since I was a kid and first learned about jazz. I’ve recorded tributes to a lot of my heroes in life: Mongo Santamaria, Tito Puente, Cal Tjader – so I thought it was definitely time to do a tribute to the great John Coltrane.”

Poncho Sanchez was born in Laredo, Texas. He was the youngest of 11 children. Poncho grew up in Norwalk, California and remembers hearing Afro-Cuban music while growing up. “As a kid in third or fourth grade I would hear my sisters dancing while listening to Machito, Tito Puente, Cal Tjader and various bands from Cuba while my brothers listened to doo-wop music and early rhythm and blues.”

While in sixth grade, Sanchez bought a fifty- cent guitar in hopes of joining an r&b band that rehearsed across the street from his home. Although he practiced quite a bit when he showed up for an audition he knew immediately that he did not stand a chance. “But it turned out that they needed a singer and although I had never sung I gave it a try and became the lead vocalist in that band for five years. Then when I was in high school the first chance I had to get behind a set of conga drums I hit them and it felt quite natural.” Soon Sanchez had saved up money from his singing jobs and was practicing congas as much as possible in his garage playing to Machito, Tito Puente and Cal Tjader records.

Sanchez’s big break occurred in 1975 when after a period of struggle he had an opportunity to play with his idol vibraphonist Cal Tjader. “I found out later that Cal’s conga player was planning on leaving soon and he was letting a lot of people sit in with him. I played one number with Cal, he asked if I could play the rest of the set with him and a week later he asked if I could join him for a week, starting New Year’s Eve at the Coconut Grove opposite Carmen McRae!.” Sanchez would be a major part of Tjader’s band for the next seven years an association that lasted until the vibraphonist’s death.

Poncho Sanchez first formed his own group in 1980, leading his ensemble during Tjader’s vacation periods and recording two albums for Discovery. Shortly before his death, Tjader recommended to Concord founder Carl Jefferson that he sign Sanchez to his Concord Picante label (a subsidiary originally started to document Tjader’s music). Poncho recorded numerous albums for Concord and won a Grammy Award for 1999’s Latin Soul.

“My band and I really do love Latin jazz. We played this music before it was popular and I think we’ve played a part in helping it to become popular again. Our main goal is always to keep Latin jazz alive growing and moving while being authentic to the music that we love. I’m proud to say that we have stuck to the basic fundamentals and the roots which are very important to us. And as I always say in clinics this music is not just for Latino people. It was born in the United States and it is American music. It is for everybody!”

COST: $26.50. Dimitriou’s Jazz Alley is located at 2033 6th Avenue, Suite 255, Seattle, WA 98121. Phone: +1 206.441.9729 x210, Fax: +1 206.443.8247. Touring in support of his most recent release Do It!, Latin jazz bandleader Poncho Sánchez delivers another high-energy recording with his longtime ensemble, as well as some special guests including Tower of Power and Hugh Masekela. A mix of Afro-jazz tunes and Latin inflected funk, Do It! has already garnered rave reviews from critics and fans alike.

More than anything else, Poncho Sánchez is a storyteller. And, as leader of one of the most popular Latin jazz groups in the world today, it’s his congas and seasoned ensemble that do the talking. Live in concert or on recordings, they spin vivacious tales that pay homage to the glories of a half-century tradition that was born when Afro-Cuban rhythms merged with bebop. One-on-one, the Chicano conguero is equally expressive, recounting in vivid details the encounters, friendships, and passions that have contributed to his remarkable career as a bandleader and recording artist. Behind the choice of every song, album title and guest artist, there’s a story Poncho delights in telling.

Do It!, the latest in a long series of releases that began in 1982 for Concord Picante, is no exception. “Its name is taken from the tune by our trombone player Francisco Torres that was originally called Duet,” Sanchez explains. “It features a duet between the trombone and tenor sax. For a while, we even called it Brothers Duet, and then Francisco suggested we just call it Do It. When we announce it at gigs, the audience starts yelling, ‘Do it, do it!’ So, I said, well, there it is. That has to be the title for the new CD!”

While the four-day engagement commemorates two decades of great Latin jazz, the Blue Note and Poncho dedicate the performances to the memory of Ray Barretto, one of the world’s most renowned conga players, who passed away February 17. 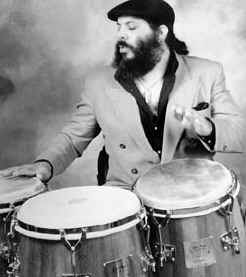 Wisconsin, USA – The Wisconsin Union Theater has announced the return of the Poncho Sánchez Latin Jazz Band on Friday, October 21, 2005 at 8 pm. Following his sold-out performance in 2002, Sanchez comes back to create another night of hot rhythms, beats and dancing. And the music doesn’t end when the band stops playing.

Ticket holders are invited to a free dance party in the Rathskeller after the show. Tickets start at $18 for the general public, $10 for UW-Madison students. Call the box office at 262-2201 to order tickets, or order online at www.uniontheater.wisc.edu.Sanchez’s eight-piece band sets the standard for snappy salsa beats, mambo sets and even traditional jazz arrangements. More than anything else, Poncho Sanchez is a storyteller, with his congas and seasoned ensemble doing the talking. Live in concert or on recordings, they spin vivacious tales that pay homage to the glories of a half-century tradition that was born when Afro-Cuban rhythms merged with bebop.

The show is sponsored by the Wisconsin Union Directorate Theater Committee with additional support from WORT, 89.9 FM. Tickets start at $18. UW-Madison students tickets are only $10 each. For more information, call the box office at 608-262-2201.