Julio Zelaya is one of the most important contemporary composers in Central America. He plays original compositions using the unique Honduran garifuna rhythms and exposes them to the musical complexities of other African rooted music such as jazz, Caribbean, Brazilian and world.

Having lived a good part of his life in North America (Canada and the United States), he has been able to assimilate the main elements of American music from pop to jazz and has found his very own musical identity as he puts together all this background with his own Latin, Spanish and African roots.

Some of his compositions have been taken as a international symbol of the Honduras Caribbean on cable tv. and his music sounds in Central America, North America as well as in Europe.

Most of the songs of his CDs have been inspired by real experiences in the Honduran Caribbean ocean (mostly the Bay Islands: Roatan, Utila and Guanaja). The magic of singing mermaids , the dance of the dolphins, a delightful swim inside the coral reefs or a Bay Islands sunset. The work also describes a certain kind of nostalgia of the Garifuna people for their mother land Africa and in some songs you can hear the real jamming Garifunas do when they get together to celebrate the different events of life or death according to their tradition.

Guillermo was based in the lively Caribbean port of La Ceiba. His band Ceibana infused Afro-Caribbean percussion with contemporary sounds, local rhythms, and the folklore of Honduras’ coastal regions. Performances wee spiced with the merging of Honduran Garífuna rhythms such as “parranda” and “punta” with better-known reggae, salsa and other Caribbean styles.

His concerts celebrated love, nature and everyday life in this part of the Caribbean. As an artist Guillermo played an important role in Honduras bringing awareness on important issues like the protection of the environment, health and literacy. His song “En Mi País” became an alternative national anthem in Honduras. His concert “La Fiesta En El Bosque” The Party In the Forest”, a recording aimed at familiarizing children with rainforest species in danger of extinction gained him a wide children’s audience in Honduras.

Guillermo Anderson and his band Ceibana gained wide recognition and acclaim through their concert performances throughout North, Central and South America, Europe, Taiwan, and Japan. 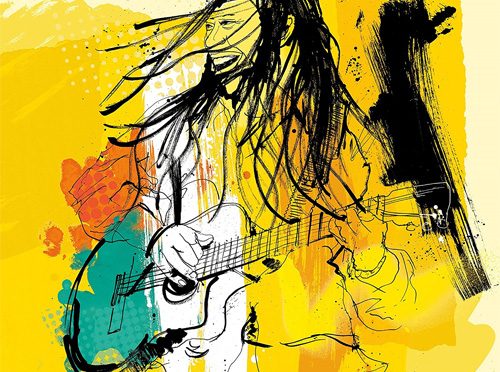 Honduran singer-songwriter Aurelio Martinez’s fourth album celebrates his thirty years as a performer and defender of Garifuna culture with this new album titled Darandi. The recording was made at Real World Records while Aurelio and his band were on tour in the UK. The idea was to capture the live feel of the band.

The song selection includes Aurelio’s best known and most popular songs from throughout his career, a mix of originals and new versions of traditional Garifuna songs sung in the Garifuna language.

Although Aurelio has played various forms of music throughout the past decades, including punta rock, this album focuses on a more traditional form called parranda (the English language writers call it paranda). Parranda is a Spanish word that has several meanings, but it’s always connected to musicians and partying at night. The Garifuna form of parranda is characterized by vocals, acoustic percussion and guitars.

One of Aurelio’s main goals is to reach Garifuna youth. “I want young Garifuna people to hear the problems they are living with reflected in my songs, and dance with those same problems.” In his songs, he references subjects such as safe sex and migration to the United States. He passionately hopes that the children who aren’t learning to speak the Garifuna language will be inspired by his music to sing in their traditional language.

The album comes packaged in a beautiful hard cover book with an extensive biography, photographs, illustrations and details about Garifuna culture. There is also a history of the Garifuna people and how they ended up in various countries in Central America. The booklet includes a map that shows the migration progress starting from African slave ship wrecks. Although the map indicates that it was two Spanish slave ships, this is not settled fact and other sources point to a Dutch slave ship expedition or even Portuguese slave ships.

Currently, the Garifuna live in about 50 towns on Central America’s Caribbean coast, extending from Belize down through Guatemala and Honduras all the way to Nicaragua. Although the Garifuna still share a common culture, the Garifuna language is disappearing. And the culture is under threat by religious missionaries and commercial interests connected to the tourism industry.

Darandi is a beautiful-crafted set of songs by the leading Garifuna artist at this time.

Buy Darandi in the Americas

Following in the footsteps of the legendary Parranderos from the Caribbean coast of Central America, and the great Andy Palacio, with an enchanting blend of African and Latin acoustic roots, Aurelio Martinez emerged as one of the most exceptional Garifuna artists of his generation.

Acclaimed for both his preservation and modernization of the Parranda musical tradition. In 2008, he was selected by the great African musician, Youssou N’Dour, to join the prestigious Rolex Mentor and Protégé Arts Initiative.

Aurelio Martinez was born into a family possessing a long and distinguished musical tradition in the small Garifuna community of Plaplaya in Honduras. He began playing guitar as soon as he was old enough to hold the instrument.

By the age of six he was regularly playing drums at social gatherings. Inspired by his grandmother and his father, he gathered a vast repertoire, which later enabled him to develop his own style.

He was an original member of the Garifuna All Star Band and worked and recorded with the legendary Andy Palacio. Along with Palacio, Rolando Sosa, Lugua Centeno, Chela Torres, Justo Miranda and others he recorded the Garifuna Soul album produced by Ivan Duran, a worldwide hit.

In 2017, Aurelio released Darandi, a selection of Aurelio’s favorite songs from his career, newly recorded. The CD is packaged as a 24-page hardback book with extended liner notes, archive photographs and illustrations.