Arturo Sandoval was born in Artemisa, a small village in the province of Havana, Cuba on November 6, 1949. Arturo started playing music at age 13 in the village band, where he learned the basics of music theory and percussion. After playing many instruments, he finally settled on the trumpet.

As a child, Sandoval had little exposure to Jazz. In a 1993 interview with Down Beat he commented, “The only thing I used to hear was traditional Cuban music, what we call “son”, which was played by a septet with a trumpet and bongos.” But one fateful day, a fellow trumpeter played him a record by Dizzy Gillespie and Charlie Parker that turned his life around. It was love at first listen!

In 1964, he began three years of serious classical trumpet studies at the Cuban National School of Arts and by the age of 16, he earned a place in the country’s all-star national band. By this time, he was totally immersed in Jazz with Dizzy Gillespie his idol. Drafted into the military in 1971, Sandoval was able to play with the Orquesta Cubana de Musica Moderna and continued his daily practice regimen, an absolute must for trumpeters.

After his discharge, he co-founded Irakere, which became Cuba’s most important Jazz ensemble, with saxophonist Paquito D’Rivera and pianist Chucho Valdés. They quickly became a worldwide sensation, and their appearance at the 1978 Newport Jazz Festival in New York introduced them to American audiences, and resulted in a recording contract with Columbia Records. But Arturo was in search of new musical possibilities and he left the group in 1981 to form his own band.

He continued to tour worldwide with his group, playing a unique blend of Latin music and Jazz, and also as a classical trumpeter, performing with the BBC Symphony in London and the Leningrad Symphony in the former Soviet Union.

Sandoval’s talent has led him to associations with many great musicians, but perhaps the most important was with Dizzy Gillespie, a longtime proponent of Afro-Cuban music, whom Sandoval calls his spiritual father. The two musicians met in Cuba in 1977 when Gillespie was playing impromptu gigs throughout the Caribbean with saxophonist Stan Getz: “I went to the boat to find him. I’ve never had a complex about meeting famous people. If I respect somebody, I go there and try to meet them.” Because of the political situation in Cuba, the country was isolated from American musicians for nearly twenty years and during this first trip back,

Dizzy wanted to visit the black neighborhoods where musicians play guaguanco and rumba in the street. Sandoval offered to take Gillespie around in his car, and only later that night when he took the stage with Gillespie did Sandoval reveal himself as a musician. Their friendship remained strong until Dizzy’s passing in 1992. Both men continued to play and record together regularly. It was while touring with Gillespie’s Grammy Award-winning United Nation Orchestra in Rome in 1990 that Sandoval requested political asylum.

Thanks to the efforts of Dizzy and then Vice-President Dan Quayle, Sandoval was able to resettle in Miami. He became a full professor at Florida International University and soon recorded his American debut Flight To Freedom on GRP. Arturo was featured on Dizzy’s Grammy winning Live At Festival Hall recording with the United Nation Orchestra in 1992 and later that year, he did his second GRP album, I Remember Clifford, his tribute to trumpet legend Clifford Brown.

His other GRP recordings include: Dream Come True, a collaboration with Michel Legrand, the Grammy winning Danzón, Arturo Sandoval and The Latin Train, and his most recent, Swingin’. Like Wynton Marsalis, Arturo has a parallel career as a classical performer. His recording, The Classical Album, features trumpet concertos by Hummel and Mozart as well as his own Concerto For Trumpet and Orchestra. He continues to perform with symphonic orchestras worldwide as well as conduct clinics for eager students.

Currently, he holds a full professorship at Florida International University in Miami, where he resides with his wife and son. Arturo has also written and performed on several film soundtracks including “The Perez Family”, “The Mambo Kings”, and “Havana”. Like all musicians, Arturo Sandoval spends most of his time on the road. When asked about having such a rich life in music, he reports that “I’m blessed. Can [you] imagine making your living doing what you love? I came from a very poor family from the middle of nowhere and could never imagine I would be able to do the things I have done. God has been good to me.”

In 2013, Sandoval received the 2013 Presidential Medal of Freedom. Then, in 2015, he was given the Hispanic Heritage Award.

The Krakow appearance of the Arturo Sandoval Sextet at Centrum Kijów kicked off spring, which, thanks to Letni Festiwal Jazzowy Piwnicy pod Baranami (http://www.cracjazz.com/pl/) [Cellar under the Rams Summer Jazz Festival], arrived unusually early this year. Cuban and afro rhythms warmed us and infected us with dance fever throughout the two-hour performance.

Arturo Sandoval had such a great time onstage with music and rhythm that it would have been a shame for us to enjoy ourselves any less.

The performance also featured several jazz ballads, performed solo by Sandoval, on the piano; reminiscences of Dizzy Gillespie, a great friend and mentor of Sandoval’s who died in 1993.; a short but comical and substantial lecture, “What is bebop?”; and Sandoval’s excellent sense of humor. Thus no element of jazz was lacking.

Sandoval also returned to his classic repertoire, from which he had departed on Eternamente Manzanero, his latest album, recorded with Jorge Calandrelli, which was dominated by romantic ballads and even pop sounds.

Anyone wishing to be reminded of the mood of the Krakow concert would be well advised to dig To a Finland Station (1982) out of his or her vinyl collection. 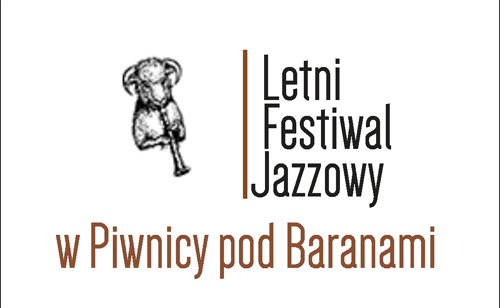 The end of winter in Krakow coincides with the beginning of the annual celebration of jazz music. Since 1996, Piwnica pod Baranami (Cellar under the Rams) has hosted the Summer Jazz Festival.

From year to year the Festival has expanded its program, presenting, along with daily concerts at Piwnica pod Baranami, concerts at Filharmonia, Opera Krakowska, Radio Kraków, and all of Krakow’s jazz clubs. Today, the Festival is Poland’s biggest jazz festival, and one of the biggest in Europe. Over the past fourteen years all of the elite performers of Polish jazz have appeared many times.

This year the Krakow stage will be graced by the Arturo Sandoval Sextet, Chick Corea Trio, and Ivo Pogorelić. 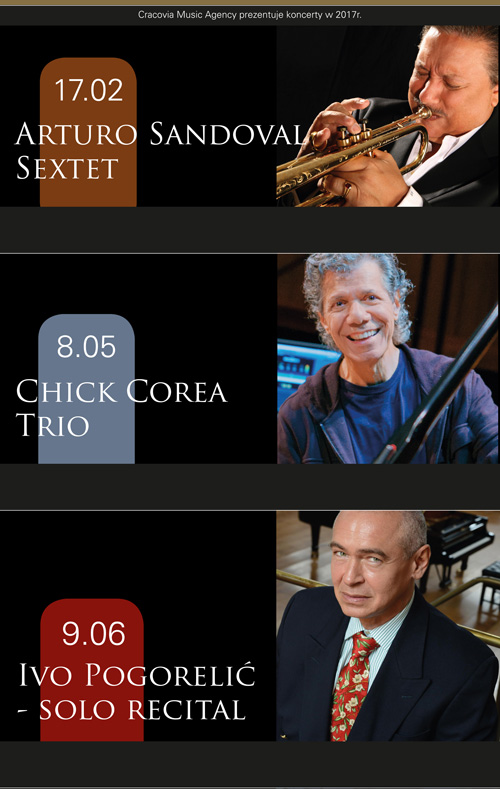 Arturo Sandoval will be performing in Krakow on February 17. This world-renowned trumpeter and jazz pianist of Cuban origin has won 10 Grammy Awards and is a six-time Billboard Music Award winner; he has also been awarded the Medal of Freedom for his artistic achievements. A student and friend of Dizzy Gillespie, in his youth he was a drummer, later a master of jazz trumpet and flugelhorn, pianist, and composer. Through his Cuban roots and inspirations, Sandoval has ventured into the field of World Music through his work with the group Irakere.

Ivo Pogorelić will be appearing in Krakow on June 9. A native of Belgrade, the artist received his musical education at Moscow Central Music School and the Moscow Conservatory. He is the winner of many prestigious awards, including the Casagrande Competition (Terni, Italy 1978) and the Montreal International Music Competition (1980). He performs with symphony orchestras around the world, including those of Berlin, Vienna, Chicago, Philadelphia, Boston, Los Angeles, New York … His extensive discography includes baroque, classical, romantic, and contemporary works.

Performing on May 8 is world-renowned jazz pianist and composer Chick Corea. For lovers of jazz-inspired fusion, jazz-rock, or bebop, this concert needs no advertising. The work of Chick Corea is known to everyone. His visit to Poland is not only an artistic event but also a media happening.

Atlanta, USA – Some of the Latin jazz artists scheduled to appear (with performance times) at this year’s FREE Weekend Concert Series from May 26-28 on the main stage in Piedmont Park include:

Other notable Latin jazz performances at this year’s festival will include Tropicus 22 in Centennial Olympic Park on Wednesday, May 23rd at 5:30 p.m. and Miguel Romero at The Park Tavern on Saturday, May 26th at 11:00 p.m

To find out more about the -Atlanta Jazz Festival, for a complete listing of artists, performance schedules and other concerts and activities, check out the new interactive web site: www.atlantafestivals.com or call the festival hotline at 404-817-6851.