Virtuoso world music multi-instrumentalist Amir John Haddad – El Amir is set to release his new guitar album dedicated to Andalusia. The album will be released on February 28, 2020, coinciding with the Andalusia Day, and will include a musical piece dedicated to each province and a surprise closing track that will go beyond flamenco and guitar borders.

“Andalucía” is Amir’s third flamenco guitar album. It honors the land in southern Spain where he spent his summers as a child. Flamenco genres include rumbas, seguiriyas, granaína, tarantos, alegrias, soleás, mineras, even a lullaby.

There is a granaína dedicated to guitarist Juan Habichuela, a seguiriya to Pepe Justicia who was his guitar teacher during his stay in Jerez de la Frontera and some tangos dedicated to the late maestro Paco de Lucia.

Amir’s multi-ethnic background and his multi-instrumentalist essence is reflected in each of the tracks that make up “Andalucía”. El Amir’s sound encompasses different styles of music, not just flamenco, including Arabic music, Mediterranean folk music, rock, funk, electronic music and Indian music.

German-Spanish musician Amir-John Haddad, better known as El Amir, was born in 1975 in Freiburg im Breisgau, Germany. He moved to Spain in 1997.

El Amir is a multi-instrumentalist, composer, arranger, musical director, and producer. He‘s considered one of the best concert guitarists in today‘s Spanish scene, defined by his personality, maturity, sound and style.

El Amir has been playing flamenco guitar and the Arabic oud since he was seven years old, and has been performing on stage for 30 years. In addition to his extensive career, he has learned how to play traditional Mediterranean instruments including the Greek bouzouki and Turkish saz, being a virtuoso in all of them.

El Amir has collaborated with a long list of artists including Radio Tarifa, Chambao, Marcus Miller and Juno Reactor.

In 2010, Amir-John presented his show “From East to West,” combining all the instruments he plays, Arabic lute, Turkish saz, Greek bouzouki, flamenco guitar and the triple-necked electric guitar to expose a wide range of traditional music. A trip through several regions of the Mediterranean, through different instruments and original compositions mixed with modern and contemporary sounds, fired through effects processors.

Zoobazar’s debut album, Uno (2011), was a mesmerizing journey across the musics of the Mediterranean countries, including Iberian folk music, Turkish, Balkan, Greek, Middle Eastern and North African grooves and tunes combined with rock, funk and jazz.

In 2017, Amir John Haddad played Vivaldi’s Concerto in C major for Mandolin for the first time on Greek bouzouki. The debut took place on the 6th of November at the National Auditorium of Music in Madrid accompanied by outstanding musicians from the Spanish National Orchestra.

Another project in 2017 was a collaboration with Paco de Lucia’s nephew, José María Bandera. The two guitarists performed material from Paco’s last album, Canción Andaluza, including María de la O, Señorita, I have to love you while you live, Chiquita Piconera, Romance of Valentía and Ojos Verdes, by Quintero, León and Quiroga and other great composers. The show also featured Josemi Garzón on double bass and Israel Katumba on percussion.

El Amir was one the featured solo artists of the Hans Zimmer’s Tour performing flamenco guitar, electric guitar, Greek buzuki and ukulele. “The World of Hans Zimmer – A Symphonic Celebration” presents the composer’s works arranged for a live symphony orchestra. Zimmer spent months working on transforming his soundtracks into opulent concert suites. interpreting a very special selection of soundtracks from the most famous films such as Pirates of the Caribbean, Gladiator, Mission Impossible, The Holiday or Madagascar. 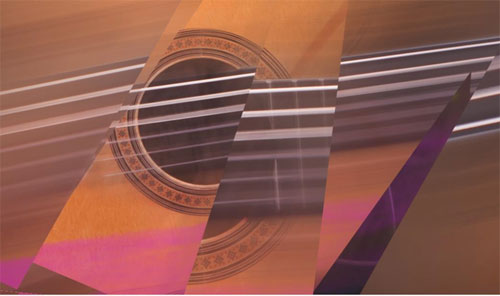 The third edition of Flamenco Eñe, the acclaimed showcase of new flamenco talent for performing arts presenters will take place May 17-19 in Malaga, Spain. This initiative, organized by the SGAE Foundation, with the collaboration of the Picasso Museum Malaga, the Andalusian Institute of Flamenco – Ministry of Culture of the Junta de Andalucía and Radio 3, seeks the internationalization of flamenco abroad.

Along with the audience, Flamenco Eñe will be attended by representatives of 12 festivals and presenters from Europe and the United States, invited by the SGAE Foundation to come into direct contact with the participating musicians and thus promote new avenues of collaboration among them. The guests this year include Fundarte and Old Town School (United States); Flamenco Biënnale (Holland); Toulouse Flamenco Festival and Viavox Production (France); Flamenco Festival (United States / United Kingdom); La Barraca (Belgium); Flamenco Festival Esch (Luxembourg); Dice (Austria), and Flamenco Colors Olomouc and Festival Ibérica (Czech Republic).

For this third edition of Flamenco Eñe, the SGAE Foundation convened an artistic committee in charge of designing the showcase program, including José Lebrero, director of the Picasso Museum in Málaga; María Ángeles Carrasco, from the Andalusian Institute of Flamenco; Teo Sánchez, director of the Duendeando radio show on Radio 3; José Manuel Gamboa, journalist, writer and music producer; and Juan Carmona, institutional director of Music of the SGAE Foundation. This committee has selected the 12 proposals out of a total of 113.

The program also includes a series of professional meetings between the participating groups, managers and the directors of festivals and guest presenters.

Acclaimed world music and flamenco artist Amir John Haddad “El Amir” is set to perform Vivaldi’s Concerto in C major for Mandolin for the first time on Greek bouzouki. The debut will take place on November 6th at the National Auditorium of Music in Madrid accompanied by first-rate musicians from the Spanish National Orchestra.

El Amir, an accomplished guitarist and multi-instrumentalist, has made a special adaptation for bouzouki and it will be the first time to hear the complete version of this Concerto on this beautiful instrument. 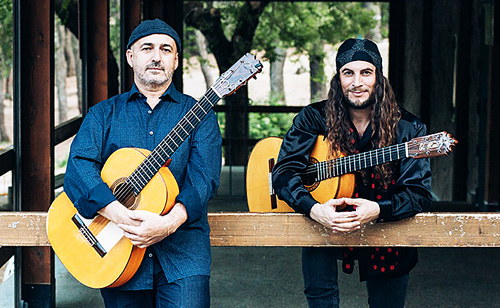 Canción Andaluza focused on popular Andalusian music known as copla. It received two 2 Latin Grammy awards in 2014 for Best Flamenco Album and Best Album of the Year.
The lineup for this special concert includes José María Bandera on guitar; El Amir on guitar and bouzouki; Josemi Garzón on double bass; and Israel Katumba on percussion. Celebrated flamenco singer Arcángel is scheduled to appear as special guest. 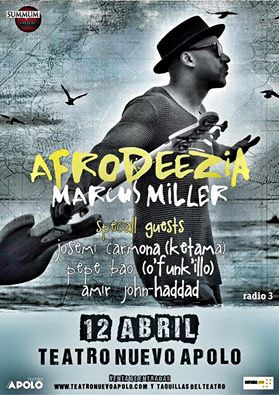 El Amir had a first encounter with Marcus Miller on stage last summer at the Festival Cultura Inquieta (Madrid) and the experience was very positive and both artists connected musically.

For the first time these four artists come together on stage and will immerse into a Jazz, Funk, Flamenco, Middle Eastern and Afro-Mediterranean fusion.

Tickets: www.entradas.com, www.summummusic.com, and at box office at the theatre and usual shops in Madrid.