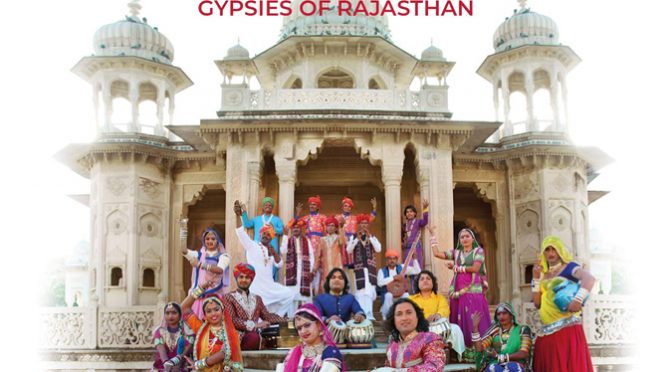 There are some CDs that are remarkable easy to review. These are the ones filled with a musical joy and a mastery that goes beyond just mere proficiency. Times of Maharajas by the Dhoad Gypsies of Rajasthan out on the ARC Music label is just one of those recordings.

With the 2005 Dhoad Gypsies: From Rajasthan” under their belt, more than a 1000 concerts in more 100 countries in the last 18 years, performances for the likes of Queen Elizabeth II, India’s Prime Minister Narendra Modi, former President of France Francois Holland and gig for The Rolling Stones’s Mick Jagger’s birthday, Dhoad Gypsies of Rajasthan are again taking us into the rich and colorful musical traditions of the north west Indian state of Rajasthan on Times of Maharajas.

Times of Maharajas is a delight from the opening strains of “Sona ra button banna (The Prince Is Born)” as the courtly life of the maharajas takes on life through each track.

Carefully crafted and intricately worked, Times of the Maharajas expresses a pure musical joyfulness by way of the syncopated vocals against harmonium on the opening before taking shape into “Breathing Under the Water,” and on the happy groove conjured up on “Janwariyo (Romantic Peacock),” or by way of the sweet saranji lines on “Lullaby.”

Listeners get a real treat by way of a four minute thirty-two second tabla solo with a deliciously threaded harmonium for company on “Tabla Solo” before Times of Maharajas closes with the exotics of “Begha ghara ayo (Maharani Longing for Maharaja).”

Times of Maharajas is a magically rich listen into the times of the maharajas. 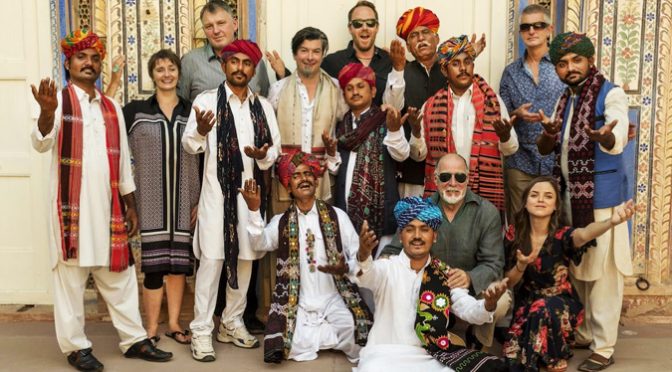 Written in Water is a fascinating collaboration between Scottish music innovators Shooglenifty and acclaimed Rajasthani ensemble Dhun Dhora. It’s a captivating fusion that brings together the Celtic traditions of Scotland and the music of Rajasthan (India). The album was recorded at the Mehrangarh Fort in Jodhpur and in Craigrothie, Scotland.

Shooglenifty and Dhun Dhora had been collaborating for a few years and decided it was time to make an album together. The plan was to record at Mehrangarh Fort in 2016. The fort is one of the wonders of the world. It’s the former palace of the Maharaja of Marwar-Jodhpur that includes one of the most important museums in India.

Sadly, a member of each band passed away so plans were postponed. Shooglenifty’s fiddler Angus R Grant died on October 2016 of cancer. Then in February 2017 the band was informed that Dhun Dhora’s dholak player Roshan Khan had died in a traffic accident.

With assistance from Divya Bhatia of Jodhpur Riff, a music festival held in the Fort each year, Shooglenifty got the permits from the Mehrangarh Museum Trust and HH Maharaja Gaj Singhji to record in the Fort.

Shooglenifty arrived to India in September 2017 with producer Ben Seal and met with their Indian colleagues Dhun Dhora. Both ensembles contributed melodies and songs. They rehearsed and recorded in the 17th century Chokelao Palace, previously the Maharaja’s guest quarters.

The album pays tribute to the two musicians who died before the recording by featuring performances on two tracks recorded earlier.

The lineup on the album includes:

Written in Water is an innovative and refreshing album where the music of two ancient and distant cultures come together with ease.

Buy the CD from beloud.co/shop/en/shooglenifty or the digital version from amazon.

Conceived in France 1995 by Hameed Khan, a tabla player, Musafir was composed of groups of musicians who in Rajasthan would not play together, but here created an exciting fusion. Hameed Khan’s background in jazz, Arabic music, North Indian Classical music, Breton music, and various crossover styles produced an eclectic aesthetic.

Musafir (“Traveler” in Farsi), from Rajasthan in northwest India, dazzled European audiences with its energetic hybrid versions of Indian folk and popular music, acrobatics, and feats of physical endurance. Musafir performed to enthusiastic crowds at hundreds of concerts and festivals all over Europe, such as WOMAD, Roskilde, Paleo, Sfinks, and Ritmos.

Musafir was featured on the CD “Gypsies of Rajasthan” (Blue Flame) and some members appeared in the film Latcho Drom, a staged documentary of Rom music. In “The Gypsy Caravan” a musical component of Musafir portrayed the symbolic and historical connection of the Roma (Gypsies) to northwest India.

The artists in Musafir were not the actual ancestors of contemporary European Roma but rather suggest some of the occupational and artistic niches that Roma might have occupied in Rajasthan. The term Gypsy was applied by the British to numerous nomadic groups in India who have no proven relationship to European Roma.

The band was composed of professional musicians who inhabit the Thar desert in northwest Rajasthan. They were members of the Langa, Manghaniyar, and Sapera groups.

The membership of the group was variable. In 2000 the band was formed by Bachu Khan Langa, Shayar Khan Langa, Barkat Khan Langa, Sayeri Sapera, and Sakur Manghaniyar.

In 2000 most of the key members of the group split to form another band called Maharaja.

Maharaja – Formerly known as Musafir, Maharaja was a group that gathers the leading musician tribal castes of the desert of Rajasthan, India, the land of some of the richest and most diverse traditions in Indian art and culture, delimited by the Swamps of Kutch, in Gujarat at South, the Arawalli mountains at East and by the Sindh, in Pakistan in the West.

Outrageously elegant and beautiful, malicious and majestic, these musicians, poets and shamans reflected their music and their sumptuous surrounding. A music of ecstasy, a whirlwind of climaxes punctuated by the gentle gesture of a breathtaking tune. An authentic magical experience.

The ancestors of these musicians played an important role in spreading the teachings of the many sects of mystics, Sufi and Bhakti movements, through singing ballads and devotional songs. For the warriors, they were familiar figures on the battlefield where their praise of past heroes and their exploits through epic tales, plus their ridicule of the enemy would encourage bravery and boost morale.

This heartfelt music of pure pleasure and pain was highly communicative and captivating for worldwide audiences though it originated from pure no man’s land and is the primitive (Jhangra) form of North Indian classical music.

Still, westerners would groove at a sound in the midst of their best Arabic, Indian and Gypsy scale of references to their rich and highly refined repertory of Folk, Devotional, Praise and Epic songs, music, dance and performance and be amazed by their rich-looking cinematic appeal.

The actors of Maharaja were more magic peoples than artists and this music can certainly not be directed.

Living like simple villagers at heart in the most remote area of the desert where the 21st century does not exist, the members of Maharaja were often described like the Gypsies of Rajasthan which they are not, ethnically speaking, gypsies, but the music they played still represented what was played at the time of the great migration.

Also by the fact of their low status (nik jat) they used to be serves and not allowed to own land, can assimilate them to the discrimination suffered by the Gypsies in Europe.

Maharaja was just a new name for the Rajasthani group Musafir who achieved worldwide success and dazzled audiences from Tokyo to San Francisco. They recorded a side project: Maharaja Flamenca featuring Flamenco wizards from Andalusia. Maharaja Flamenca appeared for the first time at the at the international world music convention, WOMEX 2000 in Berlin, and was reported to be one of the highlights of the conference’s showcases.

Maharaja was part of El Tiempo de los Gitanos tour in Europe and the Gypsy Caravan tour in the US and was on tour from April 2001 till November 2002.

The group’s first album under the name Maharaja came out in October of 2001. It was an experience of Sufi trance by the master gypsy musicians from Rajasthan. 786, is the numerology which stands for the verse of Bismillah, a Muslim blessing. Astonishingly, these numbers aggregation relates also to the Hindu Lord Hari Krishna.