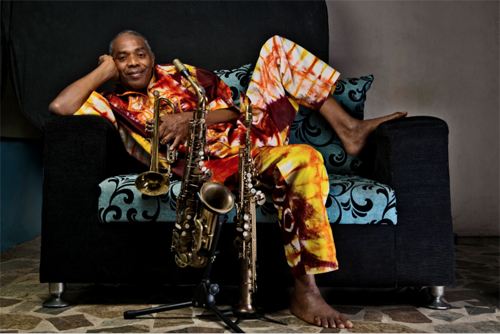 Acclaimed Nigerian musician Femi Kuti and his band Positive Force are set to release their new album One People, One World in February 2018 on Knitting Factory Records. Femi talked to us about his music and upcoming album.

Angel Romero – Tell us about your musical background, and how your father influenced your choice of music as a career.

Femi Kuti – Musical background is I practically taught myself everything I know by just reading and listening. And by playing in my father’s band. My father advised if I wanted to be a musician then it was best I listened to a lot of jazz music. This was difficult for me as I didn’t like jazz, he then introduced me to Moody’s mood for love by James Moody. This was really my introduction into jazz.

My father’s influence for sure, these days my music comes from my heart and soul.

How is your Afrobeat different from your father’s Afrobeat?

Hard for me to describe. And if I did, most people would think I’m being critical of my father. One easy way is my music is shorter 😊.

Afrobeat has spread to many corners of the world and is still popular with many fans. How is the Afrobeat scene in Nigeria currently?

Still very relevant. Especially as things are still bad economically for majority of the people. And most young artists or bands are influenced by my father or me in a way.

What’s the concept behind your new album One People, One World?

That we are all one living on one planet basically. And we have to urgently understand this before we destroy our planet.

Your son Omorinmade Anikulapo – Kuti participated in One People, One World. What was his role and what did he bring to the table?

For me, he brought beauty and love; I have no words to describe. To see my son play on my album and contribute was …. true love.

What are the challenges you face as a musician, composer and father?

Being on the road missing my children, always trying to make my band understand what we are doing is a fight against injustice and corruption. Finding great melodies to keep people that love what we are doing happy and inspired and making sure my music stands the test of time.

What is your vision of what music can bring to our complex world?

Peace, love, understanding to complex issues that politicians are too afraid to talk about.

What countries will you visit on your next tour?

I keep an open mind. I could really work with anyone or any band if time permits.

What advice do you have for aspiring musicians out there?

To pick up at least one musical instrument. And music isn’t about just the fame and money. Music is as important as studying medicine, law etc.

Acclaimed Afrobeat musician Femi Kuti will release a new album titled One People One World next month. The music video for the album’s title track is now available.

“One People One World” was shot at The Shrine in Nigeria, the dancehall and concert space Femi built as a memorial to his father, Fela Kuti.

On One People One World, Femi combines Afrobeat with reggae, highlife, soul, R&B and other African, Caribbean and African American elements.

Femi recorded most of the album in Lagos, with musicians from Positive Force, and his son, Omorinmade Anikulapo-Kuti. It’s due to be released February 23, 2018 on Knitting Factory Records.

Preorder One People One World

One of the heirs of the genius of Nigerian Afrobeat superstar Fela Kuti is his son, Femi. Femi’s version of Afrobeat is the exciting new sound to emerge from Nigeria for years, borrowing the best elements from his father’s powerfully polyrhythmic prototype – the funky, jazzy, heavily percussive sound that took James Brown’s beat back to Africa. Femi adds to the winning formula with a freshness and exuberance of young Lagos and its taste for the new R&B and dance music of the United States of America and Europe.

Femi first rose to international prominence in 1985, when he appeared at the Hollywood Bowl, fronting Fela’s forty piece band, Egypt 80. Fela failed to make it onto the plane, having been arrested at Lagos airport and jailed on a trumped-up fraud charge. Femi, already a member of his father’s band, came to the rescue that night, giving a show that brought the audience at the packed Bowl to its feet. Even though the fans had paid to see and hear the charismatic Fela, Femi was able to fully satisfy them with the same rude, muscular saxophone style (soprano, alto, tenor and baritone) and lean self-confidence bordering on arrogance.

Two years later, Femi had formed his own young band, The Positive Force, and released their debut album for Polygram Nigeria. Titled No Cause for Alarm, the album was a raw but impressive mixture of funky soul-jazz, driving percussion and horns, with sharp social comment.

Strong interest in this album prompted a dramatic debut appearance in Paris, where Femi’s no-hold-barred show devastated a huge audience. He has since carried out numerous, extensive European tours with critics favorably comparing the big band sound of the sixteen member group with Fela Kuti’s legendary Egypt 80.

The performance of The Positive Force’s lithe and sensual dancers/singers is described as a visual feast which has to be seen to be believed. In 1994, Femi was signed by the legendary Motown label. An album, Wonder Wonder, was released in 1995, and was followed by a successful tour of the United States. Unfortunately, soon after the record’s release, a change in the presidency of Motown resulted in the scrapping of Tabu, the African music boutique label which the company’s former president, Jeryhl Busby, had championed. An undaunted Femi pressed on, carrying out extensive tours within Africa, with further acclaimed visits to Europe in 1996 and 1997.

Sadly, in August of 1997, Fela Kuti died. Another tragedy was to shake the Kuti family to their roots shortly afterwards with the untimely death from cancer of Femi’s younger sister, Sola. Together with his other sister, Yeni, Sola had been a founding member of The Positive Force and her presence sorely missed. Her place in the group was taken by Femi’s wife, Funke, who has proved to be a gifted singer and dancer. In December 1997, Femi signed a recording contract with Barclay/Polygram. His Shoki Shoki album was first released in Europe to tremendous critical acclaim.

Femi performs regularly in Lagos, the capital of Nigeria. He has also toured extensively in Europe and the United States, including a 50-date European tour and US club tours. Femi and The Positive Force will continue to return to the US on tours and festival dates.

In July of 2000, UNICEF published Femi’s AIDS in Africa essay in its Progress Of Nations 2000 report. On September 4, Femi received top honors at the Kora All Africa Music Awards, including Best Male Artist in Africa and Best Song for his sexually charged single, “Beng Beng Beng.” At the globally-televised World Music Awards in May, 2000, Femi received the Best-Selling African Artist award and performed “Beng Beng Beng” to a captivated audience.

In 2001 Fight to Win continued to evolve this development of a democratization and an openness in afrobeat instigated by Femi Kuti since his first album. Containing Nigerian jazz funk rhythms with a touch of hip hop, Femi collaborated with American rappers such as Mos Def and Common, and soul singer Jaguar Wright, creating an album of universal critical acclaim.

After three years spent between studio work and touring, Femi Kuti returned to the roots of a musical and political movement of which he is, as of now, the unique symbol and only representative. He decided to invest his success in the reconstruction of a new Shrine, a musical temple, erected, displaced and rebuilt by Fela Kuti following repeated attacks against the old ones by a corrupt military power.

Just as his father before him, Femi Kuti and his Positive Force continue to make of this place a space in which music is the weapon of the future. For this heir to afrobeat it’s a turning point. Having achieved recognition on the international scene since the 1990s, Femi Kuti could have chosen to live in a western city such as Paris, London or New York City, all cities which have taken him to their hearts. But it’s in Femi Kuti’s hometown of Lagos, one of the most explosive cities in the world, he has decided to pursue the fight.

No Place for My Dream (Knitting Factory Records, 2013)