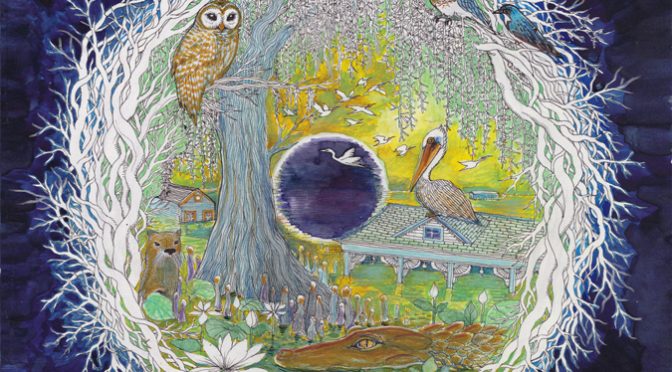 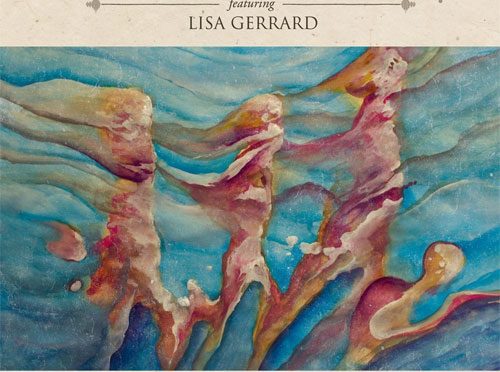 The women in the publicity photo for the album BooCheeMish smile, lovely in their traditional dresses and headdresses festooned with flowers. They are of varying ages; they are mothers, daughters, sisters and perhaps a few grandmothers in the lot. They seem pleasant, perhaps even a little unassuming, but that would be deceptive. To dismiss this group of songstresses as quaint or simply charming would be a dreadful mistake because these are the women of The Mystery of the Bulgarian Voices.

Steeped in vocals traditions that have floated over fields, wound their way through mountain passes and sunk down deep into the very ground, The Mystery of the Bulgarian Voices are captivating, haunting and call to our all shared nomadic musical past.

The female vocal choir, known as The Mystery of the Bulgarian Voices (formerly Le Mystere des Voix Bulgares) started out as The Bulgarian State Television Female Vocal Choir in the early 1950s to preserve and promote Bulgaria’s folk traditions by way of radio and television. It just happened that Swiss music producer Marcel Cellier stumbled upon and was captivated by vocal mastery of the choir and recorded and released the first volume “Le Mystere des Voix Bulgares” in 1975.

Volume II would go on to win a Grammy Award for Best Traditional Folk Recording, with additional recordings like Le Mystere des Voix Bulgares (1989), Volume III, Melody Rhythm & Harmony (1993), Ritual (1994), Bulgarian Custom Songs (2001) and Pora Sotunda (2017) with Lisa Gerrard of Dead Can Dance fame. The choir would go on to wow audiences in some 1250 concerts across the globe under the current conductor Prof. Dora Hristova.

So it is my sincerest pleasure to announce, with perhaps a small amount of gleeful hand clapping and girlish giggling thrown in for good measure, that the glorious voices of The Mystery of the Bulgarian Voices is back with a new recording called BooCheeMish, set for release on May 25th on the Prophecy Productions label. Joined again by Lisa Gerrard, as well as musicians like Hristna Beleva, Petar Milanov, Rano Ranila, Kostadin Genchev, Deimitar Karamfilov and a string quartet, BooCheeMish shimmers with the familiar goodness that is The Mystery of the Bulgarian Voices.

Opening with the soaring vocals of “Mome Malenko,” BooCheeMish packs a punch that’s exotic and evocative. Fans get welcomed doses of Ms. Gerrard’s shimmering vocals on tracks like “Pora Sotunda,” “Mani Yanni,” “Unison” and “Shandai Ya” that simply enhance the lushness of BooCheeMish.

Threaded throughout are added rhythms of jembe, riq, udu, tonbak and frame drums that add to the pleasure of the extraordinary, tight, neat intricate vocals of the choir. Listeners will wallow in the upbeat pleasures of Rano Ranila,” the haunting loveliness of “Mani Yanni” and the sheer lushness of “Sluntse” conjured up with help of Ms. Beleva and Mr. Milanov. BooCheeMish stacks stunning track upon stunning track so that “Unison” proves as powerful as tracks “Zableyalo Agne,” “Ganka” and closing track “Stanka” replete with string quartet members Yordan Dimitrov, Evgeni Nikolov, Ognyan Kostantinov and Dimitar Tenchev.

Valeri Dimchev studied at the Folk Music school-Shiroka luka and Music Academy-Plovdiv, specializing in tambura. He is a professional teacher, tambura player, and composer.

Valeri Dimchev’s music – originally composed or traditional is deeply rooted in the melodic and rhythmic tradition of Bulgaria. His music is based on playing traditional melodies in a traditional way and also leading the possibilities of the tambura beyond the tradition using contemporary approaches of playing, improvisation, and harmonization.

The Bulgarian Voices-Angelite are 24 singers from all different parts of Bulgaria who have been trained in traditional Bulgarian music as well as in Western art music. They are able to merge the tone color and vocal techniques of the Bulgarian traditional music with the complex musical structures of new composition. Thus it is often difficult to determine whether Angelite is a classical or a folk choir –perhaps the Bulgarian Voices are more than the sum of both traditions. Concert tours have taken the choir around the world to the USA, Mexico, Japan, India, and practically all Western and Eastern European countries.

The Bulgarian Voices-Angelite have been working with Bulgarian conductor Nikolay Merdjanov since 1994. Following his study of piano and conducting in Sofia and Italy, he received his diploma from the music academy in his home town of Plovdiv. As conductor of the mixed Choir of Bulgaria, Merdjanov won numerous international choir competitions in Austria, Germany and Italy. He has won the first prize in the competition of the choirs twice – in Nenterhausen, Germany, 1991, and in Varna, Bulgaria in 1993. Since 1994 he has been the conductor of The Bulgarian Voices – Angelite.

Salif Ali (Sasho) was born in Kurdzhali in 1961 of Turkish Romani ancestry. He joined Ivo Papazov’s band Trakiya in 1983 and toured with them in Europe, North America, and Australia. He also toured in the United States with the Yunakov Ensemble as part of the 1999 Gypsy Caravan, and in 2001 performed with Papazov in the Bang On a Can Festival at the Brooklyn Aacademy of Music.

Salif comes from a musical family; his father played tupan (two-headed drum), his grandfather played clarinet, and he learned to play drums from his brother. Salif is known for his high energy, wild temperament, and brilliant solo improvisations.

The Pirin Ensemble was established in 1954. A professional artistic formation, spreading the beauty and charm of Bulgarian folklore heritage and expressiveness around all world continents – Europe, North and South America, Africa, Asia, Australia.

The Ensemble has performed in 60 countries, with more than 6,500 concerts and attendance of 6,000,000 visitors. It has also produced many audio tapes, video films, and CDs. Over 60 different types of refined national costumes, are worn by its artistic groups.

Comprising three major artistic units – a women’s a cappella choir with soloists, a dancing group, and a folklore orchestra, its programs combine authentic folklore samples with author’s songs and dances on a folklore basis.

The Ensemble enriches its repertoire by choir performances of Bulgarian Orthodox music. It accomplishes research and registration activities, and brings old authentic folklore samples back to life on stage.

The Chief artistic director and conductor of the Pirin Ensemble for many years was prof. Kiril Stefanov.

Neshko Neshev has been playing with Ivo Papazov (his cousin) for several decades in the legendary band Trakiya, which he helped found. He is a master of the Bulgarian, Macedonian, Serbian, Romanian, and Romani [Gypsy] repertoires and has won numerous prizes for his virtuosic playing at festivals and international competitions.

Of Turkish Romani ancestry, Neshko was born in 1954 in the town of Kurdzhali and began playing accordion at the age of nine, learning from his father, a well-known clarinetist who accompanied the best singers of the time. He also attended music school.

Neshko is an accomplished composer and arranger as well as performer, having created hundreds of compositions.

He toured with the Yunakov Ensemble as part of the 1999 Gypsy Caravan. He also works for the House of Culture in Kurdzhali, teaching children, leading several ensembles, and writing orchestrations. Several years ago he was honored with a gala 25th anniversary concert, and a documentary film was made about him.

Milen Slavov is a composer, arranger, performer, teacher, and vocalist.

Born in Stara Zagora in the Thrace region of Bulgaria, he began playing accordion at the age of seven. He graduated from Bulgaria’s most prestigious musical training institute, the Philip Koutev Music School in Kotel, and then studied at the Musical Pedagogical Conservatory in Plovdiv. He is a skilled master of accordion, keyboard and tambura. He plays and composes in Bulgarian traditional, contemporary, improvisational, Eastern European, and gypsy styles.

Slavov began his performing career in 1984 as a “wedding” musician, requiring the highest level of professionalism and virtuosity. As a teacher of tambura at the Koutev School, Slavov wrote original works designed specifically for his students, a practice he continues today. His compositions are still taught at the Koutev School. In 1994 the school honored Slavov by adopting a photograph of him with singer Zhivka Papancheva as their official school emblem.

Milen Slavov’s awards include the 1994 Songwriting Award from the Chudomirovi Praznici Competition, the Outstanding Student Award from the Koutev Music School in 1994, and a Gold Medal for Folk Song Performance from the 1981 Koprivshtica National Folk Festival.

Slavov moved to the United States in 1997 and has performed throughout the country. He served as Music Director and Composer for San Francisco-based Westwind International Folk Ensemble.

Slavov was guest teacher of the UCLA Ethnomusicology Department for the 98/99 academic year. In 1998 he was Guest of the Community at the EEFC’s Mendocino Balkan Music and Dance Workshop. He has performed in California with Yuri Yunakov (Bulgaria’s most famous saxophonist), Grammy-winning vocalist Kremena Stancheva, Kitka Women’s Vocal Ensemble, Khadra, and at the California Academy of Sciences, the Cotati Accordion Festival and the East European Accordion Masters. The California Arts Council granted Milen Slavov the 1999/2000 Performing Arts Fellowship in Musical Composition.

Lot Lorien is a Bulgarian world fusion and progressive folk band. The group came into existence in 1997. The creators of the band, Kiril Georgiev and Zlatomir Valchev, were inspired by J.R. Tolkien’s books and thus came the name of the group. Lot Lorien’s compositions, both original and interpretations of some traditional songs, combine elements from Bulgarian, Balkan and world folklore.

By presenting traditional music in a contemporary format the band makes it more accessible to people from all around the world. Lot Lorien’s sound is further enhanced by the use of standard and non-standard instrumentation, such as electris and acoustic guitar and bass, violin, female vocals, drums, percussion, glockenspiel, tapan, jembe, darbuka and others.

Jony Iliev grew up in the Kjustendil Gypsy quarters. It just 150 kilometers southwest of Bulgaria’s capital Sofia. More than 20,000 Gypsies live there.

“When I was ten, I had a dream. At the very end of our street in Kjustendil… If you stand right in the middle of the road and look straight ahead, you can see a tower on top of a hill,” says Jony. “And behind it, they say, is Greece. In my imagination I picked up a little bag with a few slices of bread, cheese and salt, to get away, only to get away. And if I eventually came back, I’d be a grand Pjevatsh – a famous singer.”

Jony Iliev grew up as the youngest of eight brothers in a musicians’ family. Jony’s vocal talents were acknowledged early on and subsequently encouraged within the family structure.

At 10 he already sang weddings, all night long. His powerful expressive voice charmed listeners. Now, Jony Iliev and Band are on the forefront of Bulgaria’s new Roma (Gypsy) sound.