Uxía Domínguez Senlle, better known as Uxía, was born November 19, 1962 in Sanguiñeda, Spain. She took on singing at an early age and despite having access to all types of music, she has always felt most strongly drawn to the music characteristic of her region. Her first CD with traditional Galician songs was released in 1986, a collaboration with musicians who went on to become members of her band, Na Lua.

After two more albums with this line-up, Uxia shifted the focus of her activities to live performances. She toured throughout Spain and the rest of Europe, through Cuba and Argentina and was a celebrated guest at various festivals worldwide.

These experiences not only intensified Uxia’s insight into the culture she represents but also brought her into contact with many representatives of other related folk music traditions. “Estou Vivindo No Ceo” (I live in heaven) was her first international release. 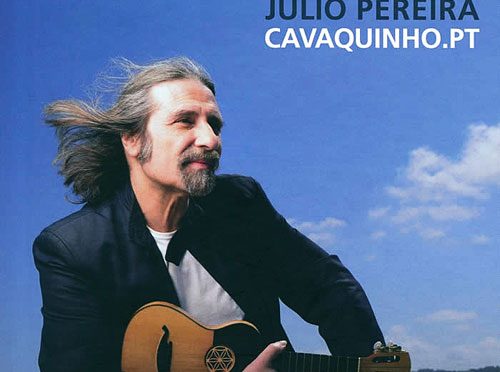 The original ‘Cavaquinho’ album had a significant influence and defined Julio Pereira’s career as a musician. The new recording, Cavaquinho.pt is part of a larger project around the cavaquinho that includes research, inventorying the different variations of the instrument, scores, players, composers and builders around the world. The cavaquinho is related to other small guitars in the Iberian Peninsula and the predecessor of the ukulele. It has traveled around the world over the centuries, leaving descendants in Brazil, Cape Verde, Hawaii and Indonesia.

The music on Cavaquinho.pt incorporate various folk traditions from Minho in Portugal as well as the increasingly popular fado. In addition, it reflects the travels of the cavaquinho, featuring influences that go beyond the various regions of Portugal. For example, Sara Tavares, a singer of Cape Verdean descent appears on one song. There are also traditional songs from Brazil and Galicia (Spain).

The physical edition of Cavaquinho.pt is exquisitely packaged in a 112-page hard cover book, with extensive liner notes in Portuguese and English, photos, credits and beautiful illustrations by Pedro Sousa Pereira.

Cavaquinho.pt is a remarkable recording dedicated to the cavaquinho recorded by one of the essential musicians in Portugal’s contemporary folk music scene.

Buy the album from www.tradisom.com

Uxía and Narf, two of the most important and influential artists from Galicia, are set to perform on Saturday, April 2, 2016 at Roulette in New York City.

The two Galician artists are touring the US together for the first time, performing their acclaimed Baladas da Galicia imaxinaria program. Their joint musical project features classics from both musicians, including poems by such writers as Rosalía de Castro and Federico García Lorca; original compositions; and adaptations of traditional alalás, the oldest and best-known form of Galician music.

Uxía and Narf y have built bridges across cultures through music, and created their respective repertoires after years of traveling and exchanging experiences with artists from Angola, Brazil, Mozambique, Portugal, Cape Verde, and Guinea-Bissau.

Uxía, “the voice of the Atlantic” is celebrating 30 years of a career that has made her one of the most popular musicians of Galicia. Fran Pérez (“Narf”) is one of the most innovative artists from the last two decades in Galicia; after more than 20 years in the music scene and playing in different rock bands, he created his musical project “Narf” in 2004, becoming one of the most interesting figures of the Galician cultural scene.

The concert will be preceded at 7:00 p.m. by an informal discussion with the artists about Galician music and its context hosted by Marina Carracedo, lecturer in the Department of Spanish and Portuguese at UCLA.