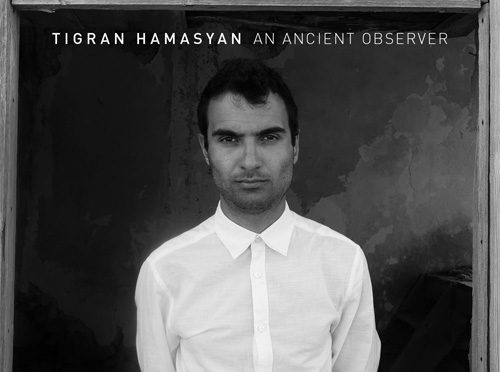 Just out of curiosity, when was the last time you heard a piano recording? Seriously, when was the last time you sat and soaked in the frolicking richness or the magically complexity of an entire piano CD? Been a while? When so much peripheral background music screeching from the corners it hardly seems like pleasurable and more like something shoved down the throat, re-exploring the unimaginable richness of the piano can seem like an indulgence.

You deserve an indulgence by way of Tigran Hamasyan’s second offering on the Nonesuch Records label entitled An Ancient Observer. Born in Armenia, Tigran Hamasyan is known for such recordings as World Passion, New Era, A Fable and his first recording with Nonesuch by way of Mockroot. He is also known for collaborations with Dhafer Youssef, Ari Hoenig, Lars Danielsson, Stephane Galland and Sefj Tankian.

Backed by a wealth of folk traditions from his Armenian roots, Mr. Hamasyan has delved into progressive rock and jazz, often pulling at those Armenian musical tradition threads to flesh out his musical compositions.

Mr. Hamasyan explains his new recording, “These songs are musical observations about the world we live in now, and the weight of history we carry with us.”

Pairing charming elegance with musical drama, An Ancient Observer is a bold, razor sharp listen that tugs at the musical tapestry of jazz, classical and his native folk music. Plying the listener with his extraordinary mastery of the piano, Mr. Hamasyan expands the depth by way of vocals, synths, Fender Rhodes and special effects. The result is at once intimate and then expansive as he takes the listener through such musical feats as “Markos and Markos,” “The Cave of Rebirth” and the elegance of “New Baroque I and II.”

Back in Armenia, where ordinary life inspires his music Mr. Hamasyan explains, “I gaze out of my window and see the biblical mountain Ararat with perpetual snow on its peak, with electrical towers with wires in the foreground cutting the picture, and satellite dishes melted onto old and modern houses—ancestral smoke coming out of their chimneys—and birds hovering above the trees along with occasional airplane trails in the vast sky. It is a dialogue, this interaction of God-given ancient nature with our modern human achievements” he says.

“For me it is an awakening, and a beautiful feeling, to be able to observe the magnificence of this sleeping volcanic giant, which has existed for millions of years and was observed by the Ararat Valley Koura-Arax culture through to the present day citizens of the Armenian republic. I can see and observe the same birds, animals, rivers, and mountains that the craftsman of 4,000 years ago painted on a clay vessel. He was observing the same thing I observe now, and what remains is his or her beautiful work of art.”

Composing all the music on An Ancient Observer and basing “Nairian Odyssey” and “Etude No. 1” on Armenian folk melodies, Mr.Hamasyan enthralls and entrances listeners with “Nairian Odyssey” with its fascinating twists and turns and “Etude No. 1” with its quick and bright clever catchiness, as well as additional tracks like “Egyptian Poet,” Leninagone” and title track “Ancient Observer.” This is simply a lush recording.

Jazz and piano fans are sure to dive into the deep end of An Ancient Observer, but for those jazz novices this might be one of those recordings they might very well enjoy dipping a toe into for the sheer quiet loveliness, expressive drama and poignant expansiveness. An Ancient Observer is one of those easy indulgences begging for us to be quiet and just listen.