On the album Regrass, the group performs stringband music wizardry exclusively on plucked instruments. The repertoire on the Redgrass CD includes Imperial Court classics of the Tang Dynasty (618-907) as well as contemporary compositions that include bluegrass, eastern European horo, jazz and other genres.

Although Mei Han moved to the Nashville (Tennessee) area in the United States, the group is still active. 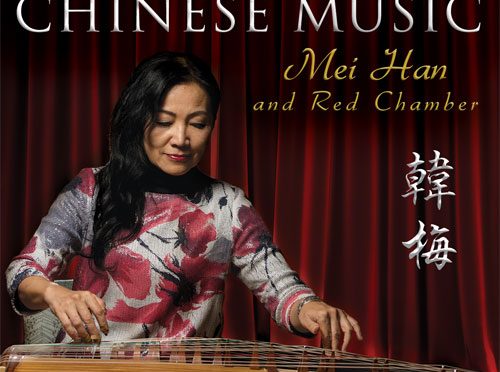 Dipping into the wonderful world of Chinese music, ARC Music is set to release Classical & Contemporary Chinese Music by the esteemed zheng player Mei Han and all women musical group Red Chamber on September 30th. Appearing on the Za Discs label, Ms. Han has recordings such as Ume (2006), Distant Wind (2005) with Randy Raine-Reusch, Outside the Wall (2005) with the Borealis String Quartet and the 2014 offering Gathering with Red Chamber. Red Chamber also has the 2008 recording Redgrass, also on the Za Discs, for listeners to explore.

With the combined musical prowess of Ms. Han and Red Chamber’s Guilian Liu, Geling Jiang and Zhimin Yu, one might suspect that this “plucked string” ensemble is simply a traditional Chinese musical group, but that would be far from the width and breadth of the musical aspirations of these musicians.

Masters of the zheng or long zither, the pipa or teardrop lute, the saxion or fretless longneck lute, the zhongruan or moon lute and the daruan or bass moon lute, Ms. Han and Red Chamber’s members delve into just about every kind of music from the music of the Tang Dynasty (618-907) to jazz to varied folk traditions from around the world and even slipping into the plucked goodness of Bluegrass.

Pairing elegance and pure passion, Classical & Contemporary Chinese Music opens with the jaunty “Dao Chuilian,” giving a listen into a 20th century Guangdong province, before diving headfirst into the quick work of composer Moshe Denburg’s “Dark Red Ruby” with its dashes of a klezmer and Balkan style by way of the liuqin or small teardrop lute and zheng by Ms. Han, pipa by Liu, zhongruan by Ms. Jiang and daruan by Ms. Yu.

“Xi’an Medley” is a lovely track comprised of a collection of tunes with names like “Melody of Plum Blossom” and “Moth to Flame.”

“Nokoto,” a tribute to Japanese koto master Tadao Sawai, is elegantly lush with the addition of Randy Raine-Reusch on zheng and Laurence Mollerup on acoustic bass.

“Peng Baban” is a delicious traditional styled track from Shandong province. Other delights include the raucous folk tune “Sunny Spring and White Snow, “Datun Jelut,” a folk tune from the Kenyah and Kayan peoples of northern Borneo and the spunky “Dance of the Yao People,” a celebration of the Yao people of southwestern China.

Despite its rather prosaic title, Classical & Contemporary Chinese Music is a globe-trotting delight. Ms. Han and Red Chamber’s Ms. Liu, Ms. Jiang and Ms. Yu are truly impressive in their musical prowess as they are in the musical reach and well worth a listen.

Geling Jiang is an award-winning multi-instrumentalist, who started her professional training at age of 10. After graduated from Wu Han musical Conservatory, she became a member of the Chime Bell Ensemble of Hubei province for 20 years, with which she recorded numerous radio broadcasts, TV programs, and films; and performed tours to the United States, Japan and Singapore. Trained initially as a sanxian (three-string fretless lute) player, she also regularly plays the zheng, pipa and ruan.

Geling Jiang has performed with various Chinese music ensembles in the Vancouver area, including Red Chamber, the Inter-Cultural Orchestra and Orchid Ensemble.

Gathering is the latest album by Red Chamber, one of the finest string music ensembles in North America. Red Chamber is an all-female group specialized in Chinese musical instruments.

The four musicians in Red Chamber are highly eclectic, open to wide-range of musical influences. I’ve seen them live and their repertoire ranges from traditional and classical Chinese music to bluegrass, jazz and esoteric contemporary western classical music. On Gathering they deliver an outstanding set of original pieces and traditional compositions presented with exciting new arrangements.

The musical influences on Gathering cross various boundaries. The opening piece sounds like a sort of Greek klezmer mix, while other times the ensemble digs deep into their Chinese roots as well as African and Celtic music.

Highlights include ‘Dao Chuilian’, a splendid Chinese-flavored piece. Another high point is ‘Madly Riding’, a modern acoustic worldbeat composition where the four instrumentalists demonstrate their admirable skills accompanied by percussion and other instruments. There is also the exquisite ‘A Dream of Africa’ where the ensemble emulates at times the sound of a kora. The spirited final piece, ‘Dance of the Yao People’ also stands out, featuring spectacular solos.

Buy the digital version of Gathering.