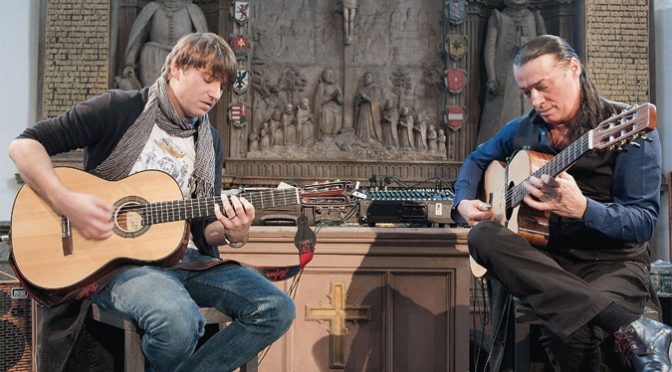 Acclaimed guitarists Lulo Reinhardt and Daniel Stelter are set to perform Thursday, October 11th, 2018 at The ArtsCenter in Carrboro, North Carolina. Reinhardt is the great-nephew of the legendary gypsy jazz guitarist Django Reinhardt. He will be joined by the exceptional jazz and classical playing of Stelter.

For more information about the artists go to Lulo Reinhardt and Daniel Stelter.

The ArtsCenter is located at 300-G E. Main Street in Carrboro. For more information and tickets go to artscenterlive.org or call the Box Office at (919) 929-2787.

Lulo Reinhardt is a gifted guitarist who was taught by his father since the age of five. At twelve, he was already playing with the Mike Reinhardt Sextet, an ensemble entirely dedicated to the gypsy swing of Django Reinhardt. In 1991, leaving the sextet to explore new musical experiences he founded I Gitanos with his father Bawo and cousin Dege. The first result of their new gypsy goes Latin was the release of I suni CD in 1994. After that, successful tours throughout Europe and release of next CD, Ab I Reisa, in 1998 followed.

In the meantime, Lulo Reinhardt has worked on various projects and has established himself an outstanding reputation as a composer and guitarist. He has played in major events and collaborated with Brazilian guitarist Zezo Ribeiro.

Along the way, he has gathered the best musicians around him to create his personal project. Lulo Reinhardt Project is the accomplishment of a maturing style and artistic creation, which you cannot classify. Swinging from tune to tune, Lulo Reinhardt brings into his music his gypsy roots as well as flamenco or Latin rhythms from Cuba to Brazil.

“Lulo Reinhardt is a spontaneous and spirited musician who is led by the guitar into musical voyages of discovery. His curiosity has taken him to southern Spain in search of flamenco roots, and to South America, exploring various musical styles of Latin Jazz,” said Spanish producer Manuel Dominguez, founder of the Nubenegra record label.

In 2007, Saga Instruments of San Francisco, California made the first Lulo Reinhardt Model Gitane 310, modeled on the classic Gypsy guitars. This inspired Lulo to compose more Gypsy Swing material, which he combined with Latin music, and in 2007 changed the name of his group to the Lulo Reinhardt Latin Swing Project. They recorded their first CD in 2008.

In 2016, Lulo Reinhardt and fellow German guitarist Daniel Stelter released Live in der Stadtkirche, which quickly made “Record of the month” in the German NDR Jazz Charts. Daniel and Lulo toured North America in 2018.