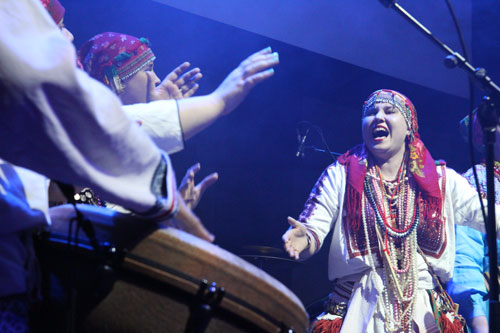 Daryana Antipova: Hi Katya, we have known each other since the Kamwa Festival in 2005 when you performed with another folk band. How old is Merema?

Ekaterina Modina: Merema was created in 2010. We called it a folklore ensemble first, and it turned into an ethnographic folklore studio in 2014. We sing Erzyan and Mokshan song and recreate folk rites on the stage. We go on ethnographic expeditions to villages and record and release albums. We are engaged in collecting and preserving folklore. “Merema” means “a story, a legend” in the Erzyan language.

Daryana Antipova: Tell us a little more about the Mordovian culture- how many people in Mordovia still speak their native language?

Ekaterina Modina: Almost no one speaks our national language any more. Basically, this language is preserved in the villages of the districts of the Republic of Mordovia. Maybe there are many more of us than is officially confirmed but the Erzyans and the Mokshaans are disappearing. During the population census, people are embarrassed to say they are Erzyan or Mokshanin- they prefer to say they are Russians.

Daryana Antipova: Oh, that’s sad. It seems to me that the young generation, especially children, do not understand folk music at all…

Ekaterina Modina: We invite children to our children’s studio and a children’s ensemble. There is an amateur ensemble and there is a professional ensemble for old Mordovian songs, “Moroma”. We perform in kindergartens and in schools. Of course, it’s hard to compare and compete with modern genres in music. But if kids get to know their native ancient culture from a young age, culture becomes a part of their life. And yes, it is becoming more and more difficult to attract young people. Teenagers don’t come to our concerts anymore. Our audience is adults who have already formed their own interests. Some of them come from the village and still remember living traditions.

People in Mordovia don’t understand their own culture, because it is incomprehensible to them. The songs are strange and unfamiliar, and they don’t speak this forgotten language. But they still have a unique opportunity to listen to ancient, prolonged polyphonic singing. The songs are original and not everyone likes them, because we have a lot of dissonant chords. In our culture, we sound more like singing traditions in Georgia and southern Russia.

Daryana Antipova: How can we attract people to authentic folklore, if it does not exist on Russian television?

Ekaterina Modina: People are not ready for this. Not everyone can understand the beauty of multi-voiced lyrical songs. We usually combine our shows with the theatre. It all depends on how you present this folklore. Make it tasty. As a collector and a connoisseur I can listen to grandmothers all day long. We go to villages in different regions of the Republic of Mordovia. I made an agreement with our local TV channel 10, and they now travel with us and film the program “The Tradition of Antiquity”. I first go on an expedition, record, watch and listen. It’s so nice and amazing, it’s not possible to convey in words, you just need to be there. This program is shown all over Mordovia. When I come to the village, maybe I can find just one song, but for the sake of this song it is worthwhile to come there and spend a few days.

Daryana Antipova: What instruments do you use in Merema?

Ekaterina Modina: In our work we use household tools — uhvat, pechnaya zaslonka, rubel (traditional Russian kitchen implements). We have our own national drum, but at the moment we have not received any support to order and have it produced. It turned out to be easier to go to the store and buy an African drum than to make our traditional one. We are not proud of this. We also play our traditional, very capricious instrument — “nyudi”. No one plays it nowadays. We have restored it and managed to have an older person show us how to play it. The tool is very impractical. It manages to play for only five minutes. Because the “tongue” is very wet, the instrument shifts tonally.

Also we are actively engaged in traditional costumes. As you can see in our photos and videos, all the costumes are authentic; we do not alter them. If you do not show costumes and do not popularize them now, then they will be completely lost and will remain only in textbooks. To fully understand the culture, you must not only hear, but still see and, perhaps, feel culture.

The Erzyan outfit consists of a bottom shirt — a ”panar” and a top robe — “rutya”. Female amulets (“pulays”) are very important in our culture. The word “Pulax” is translated as a tail. This is a woolen floor skirt, which is tied at the front. “Syulgam”, according to traditional beliefs, protects the female breast, which feeds the new generation. The Erzyans were pagans, very superstitious people, so every Erzyan wore an amulet everywhere. The bells were hung on ”pulays”, since it was believed that the ringing repelled evil spirits. They even said that you hear a Mordovian girl first, and then you see her.

Daryana Antipova: In Russia, there is little support for folk culture. How do you continue your work?

Ekaterina Modina: People come and leave my ensemble due to life circumstances or because of the low pay for culture in general. People work on their own initiative- no one would have stayed in this system if they had not been so keen on culture, folk traditions. I myself still teach at the university. During their studies, students are satisfied with their salary in ensemble, but when they graduate and receive a diploma, they don’t earn enough to provide for their family. I myself have a family and three children, so I have to work other jobs so that I can do what I love and at the same time have something to live on. This is very sad. I would like to devote myself entirely to one pursuit.

During these seven years “Merema” changed several times. Now we have six people, but one will enter the army soon. It’s also kind of difficult to find new people for our kids ensemble. The Mordovian government pays more attention to sports, and it’s important for kids to be physically fit. Mordovia is famous for athletics- we have a good sport school and kids are eager to get into it. Even my son has recently joined the football team. I tell him that he will not be able to get by on folk singing, so he should just think of it as a favorite hobby.