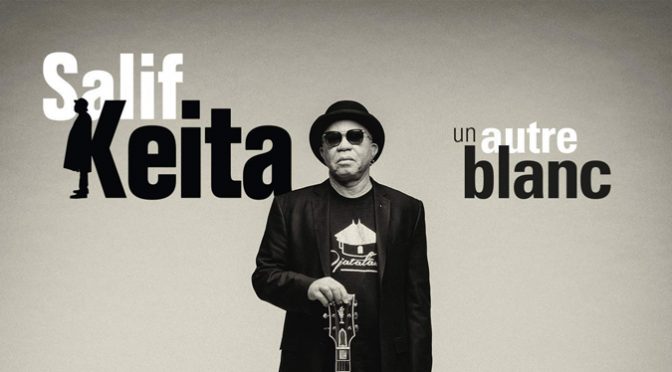 The title Un Autre Blanc or Another White is a reference to the trials and tribulations Mr. Keita has faced through his albinism – a condition thought to be a sign of bad luck or misfortune by his Mandinka culture.  A glorious testament to his endurance and musical mastery, Mr. Keita embraces Un Autre Blanc

Dr. Cherif Keita, Mr. Keita’s cousin and biographer, and a professor at Carleton College explains, “When some people sing, they create social change. Salif changed the old ways in Mali, our relationship to musicianship, to classifying people. Because of his condition, he had to latch on to what he could do to survive in a harsh environment in Bamako. Music became his salvation.”

With a wealth of world tours, recordings and collaborations that include the likes of Carlos Santana, Joe Zawinul, Vernon Reid and Esperanza Spalding, Mr. Keita has proved the gold standard for fans around the world.

With Un Autre Blanc, Mr. Keita prepares for retirement, but not before a final musical statement wrapped so tightly with his own identity as a persistent call for acceptance and an embrace for all of our differences, as well as a call for an end to conflict.

“I’m a white man with a deep black African soul, and I have accepted that. Now you have to accept that difference and that contrast,” as Mr. Keita firmly puts it.

Opening with “Were Were,” a tribute to monumental figures like Nelson Mandela, Desmond Tutu and Sekou Toure, Un Autre Blanc launches listeners into the riches of Mr. Keita’s familiar vocals and musical joyfulness. Brimming over with guitars, kora, n’goni, keyboards, horns, balafon and sassy backing vocals Un Autre Blanc is a treat.  If that weren’t incentive enough to take a listen then maybe Angelique Kidjo and rap artist MHD appearing as guest artists on the raucous “Itarafo” might temp listeners. Nigerian singer Yemi Alade appears on sweetly worked “Diawara Fa.”

Un Autre Blanc is just another feather in Mr. Keita’s hat and just as brilliant as the very first feather.

TJ Nelson is a regular CD reviewer and editor at World Music Central. She is also a fiction writer. Check out her latest book, Chasing Athena’s Shadow. Set in Pineboro, North Carolina, Chasing Athena’s Shadow follows the adventures of Grace, an adult literacy teacher, as she seeks to solve a long forgotten family mystery. Her charmingly dysfunctional family is of little help in her quest. Along with her best friends, an attractive Mexican teacher and an amiable gay chef, Grace must find the one fading memory that holds the key to why Grace’s great-grandmother, Athena, shot her husband on the courthouse steps in 1931. Traversing the line between the Old South and New South, Grace will have to dig into the past to uncover Athena’s true crime.