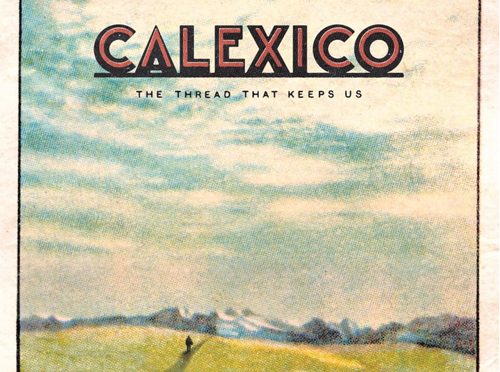 Calexico’s 9th studio album, The Thread That Keeps Us (Anti- records), is a slight detour from their usual Americana–Mexicana sound, but is no less captivating. Three years since their last release, the southwest duo of Joey Burns and John Convertino bring us 15 new tracks, written while on a self-imposed reconnaissance to northern California. They revisit their own musical youth and inspirations, the nostalgia of old haunts, favorite bands and family. It seems these inspirations are the thread, but the album is simultaneously a lament for the current world climate. This is reflected in a more chaotic sound than previous albums.

Opening track, ‘End of the World With You’ is pure pop, engulfing you in jangly guitar that becomes wilder as the song progresses. ‘Voices in the Field’ is raw and distorted with grittier vocals from Burns, whereas ‘Bridge to Nowhere’ is a haunting beauty showcasing his higher range. ‘Under the Wheels’ experiments with synth beats and dub, while grieving US policy, “…deep in the war regime, always someone else’s scheme…”.

Burns’ musical tastes are laid bare with the cool funk of ‘Another Space’, the edgy Pixies sound of ‘Eyes Wide Awake’, and 60s Cramps-like garage punk of ‘Dead in the Water’. All different territory for Calexico, but great tributes to their experimentation and eclectic musicianship.

‘Girl in the Forest’ and ‘Music Box’ are two heartfelt tributes to Burns’s twin daughters, clearly central to his purpose in life and love.

Jairo Zavala Ruiz provides lead vocals on groovy ‘Flores y Tamales’, the sole Spanish track on this album, bound to be a favorite at their live performances.

Followers know the band love a bit of the obscure, their albums always punctuated by atmospheric instrumental tracks. There’s classic Calexican eeriness in ‘Spinball’, and wafting psychedelia in ‘Shortboard’.

A highlight of the album is ‘Thrown to the Wild’, a broody slow-build reminiscent of ‘All Systems Red’ (2006) or ‘World Undone’ (2015). Beautiful musical chaos.

These guys are seriously talented. On most albums Burns plays no less than ten instruments. Convertino’s drums and percussion are unmistakable – quintessential to the whole Calexico sound.
The current lineup of Burns, Convertino, Martin Wenk, Jacob Valenzuela, Sergio Mendoza, Jairo Zavala Ruiz, and Scott Colberg tour Europe and the US in Spring 2018.

The U.S. release date for The Thread that Keeps Us is January 26, 2018. Album art by Ryan Trayte.

Buy The Thread That Keeps Us