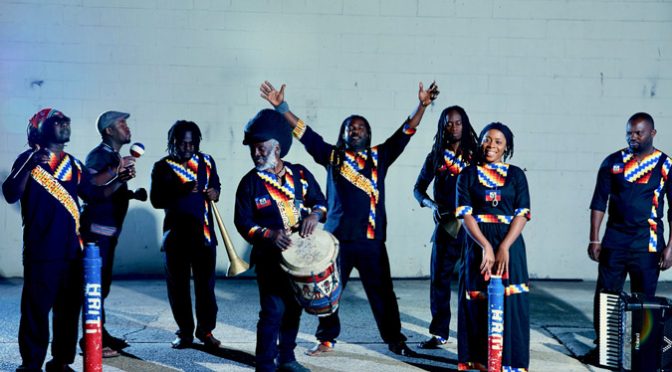 Time for another overview of CDs that have fortuitously found their way into my possession, and, even more fortuitously, that I’ve enjoyed enough to spread the word on. If you want or need a common thread by which these releases are connected, file them under the general heading of Music to Make Hard Times a Little Less Hard or Good Times Even Better. And if that ain’t what music’s all about, it’s at least a key factor.

Many of those who fled the tumult of the Haitian slave revolt that began in 1791 found refuge in New Orleans. The longstanding musical and cultural connections between the two places is celebrated by Haitian roots band Lakou Mizik on their new release HaitiaNola (Cumbancha, 2019), the inspiration for which came about after they played the New Orleans Jazz and Heritage Festival in 2017. A glorious gumbo of guests representing the Crescent City grace the entire album and mutual inspiration abounds.

From the moment the already-irresistible dance groove of the opening “Renmen” gets notched higher by the reedy injections of the Preservation Hall Jazz Band, the party is in session. Sure, some of that party cools down the pace a bit and makes way for mellower tracks like “La Famni” (featuring Jon Cleary’s moody piano) and “Rasanbleman” (with Leyla McCalla’s cello speaking as eloquently as the spirited voices), but the bulk is celebratory.

The sort of African-derived rhythms that propel “Loumandja” (assisted by Damas Louis and Logan Schutts on tanbou drums) are never far off, and when they’re laced with the declarations of Cyril Neville (“Sa Na Kenbe”), the deftly sweet horns of the Soul Rebels (“Manman Lavi,” “Bouyou Lakou”) or the unparalleled wallop of Trombone Shorty (“Pistach Griye”), they come alive ever more resoundingly. Keeping Lakou Mizik’s traditional/modern rasin approach intact while adding creole wonders of another kind entirely, this album mixes and matches with brilliance to spare.

Ever eclectic and never content to be under the heading of mere “Latin” music, Blades moves easily from rock-like punchiness to balladry, reggae, Celtic strains (the Spanish kind), hip hop and funk. His voice is as strong and plainspoken as ever, he’s backed by a tight band that attunes to every stylistic change, and here he adds another to a long line of impressive albums.

Singer/guitarist Rafael Berrio comes across a bit like a Spanish Bob Dylan on Niño Futuro (Rosi Records, 2019). He’s got a talk-sing kind of voice and his acoustic/electric backing of guitar, bass, piano and drums has a pleasantly twangy quality filled with subtle accentuations, easy flowing melodies and a seeming refusal to be showy.

With no lyric translations and my lack of fluency in Spanish, the meaning of the songs is lost on me (although the title track seems to be a cataloguing of what our children stand to inherit, both good and bad). Such a quibble aside, the disc is a quietly refreshing diversion that packs its own kind of power and doesn’t need to try hard to do so.

Andreas Arnold is also a guitar slinger, but apart from a couple of tracks, Odisea (Galileo Music, 2019) leaves vocals out of the picture and lets Arnold’s acoustic axe do most of the talking. Flamenco is one language it speaks, while utterances of jazz, blues and rhythms from the Arabic world have a say in the matter also.

Arnold can play some fiery riffs and runs when he chooses to, though his approach is more often one of finesse that comes in selected bursts rather than sustained flash. The supporting instrumentation is primarily bass and percussion, with some additions of piano, trumpet, violin and melodica. No matter the configuration, the interplay between Arnold and his accompaniment never fails to build into a tasty whole that satisfies the ears and heart. Note how well the deft picking of “Bike Messenger” contrasts with the tune’s shuffling inner core or the perfect squaring off of guitar and muezzin-like vocals on “Tangos Arabe.” And be sure to stick around for the concluding “Continuum,” a Jaco Pastorius piece that comes across like the sonic equivalent of a finely cut diamond.

Tabla player Shahbaz Hussain and pianist Helen Anahita Wilson both shine on Diwan (Golden Girl Records, 2019), a duo disc that ranges from qawwali-ish pulses to exquisitely built and disassembled passages that reveal just how skilled these two are. Some of it carries a stately, chamber music feel. Some of it simply dazzles. If you think a stunning wall of sound can’t be built with only two instruments, think again. Hussain and Wilson build a beauty of one here.

You can chalk it up to “gratitude for the force of serendipity,” to quote the very sparse liner notes, or simply enjoy the master musicianship at work.

I initially overlooked Dreamers (Sony 2018), a collaboration of string quartet Brooklyn Rider and Mexican vocalist Magos Herrera. Please pardon my shortsightedness, because the album is a stirring, rhythmically alive but often pensive collection of songs representing a variety of South American styles. Compositions by the likes of Gilberto Gil, Federico Garcia Lorca and Caetano Veloso, dreamers all, are reconstructed by Brooklyn Rider’s savory violins, viola and cello, matched in unencumbered beauty by Herrera’s Spanish, Portuguese and English vocals.

The title track, based on a poem by Octavio Paz, typifies the overall approach with strings and voice gliding through lovely twists and turns on route straight to the soul. Percussion and palmas are added throughout, bringing a spirited zest to the already glorious combination. If, like me, you missed this one, make amends and latch onto it soon.

Born in Cameroon and based in Atlanta, singer/instrumentalist/composer Moken offers a rather atypical African sound on Missing Chapters (Moodswing Records, 2019), his debut album. His voice, an elastic, quirky combination of scat singer, crooner, bluesman and octave-jumping musical theater performer, is the immediate grabber. Trust me- you’ve never heard anything quite like it. The tracks, mainly of a sprightly acoustic sort, range from affirming declarations (“Your Sun is Rising,” “Walking Man”) to grinning slices of life (“Tequila Song”).

This is one of those records that will have you notching up the volume and pricking up your ears to catch the nuances of Moken’s never-predictable singing and how well it goes with the varying, unfailingly tight arrangements of guitar, upright bass, trumpet, drums, n’goni, reeds, violin and percussion. While recognizable as African music with Western elements, Missing Chapters lives up to its title by bringing in Moken’s many unique and adventurous angles. 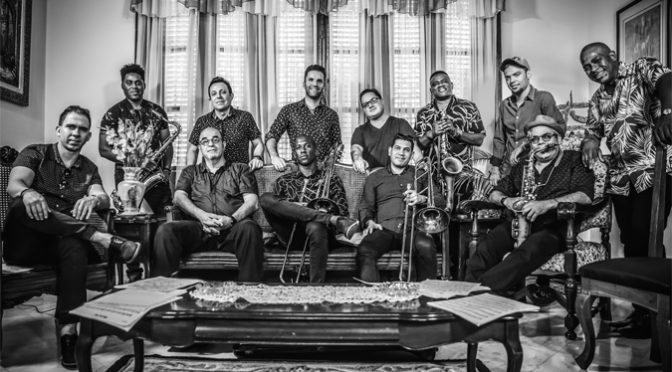 American world music showcase globalFEST has announced the names of seven of the artists scheduled to perform in 2019. The concerts will take place on January 6, 2019 at the famed Copacabana vanue.

The seven artists announced so far include: