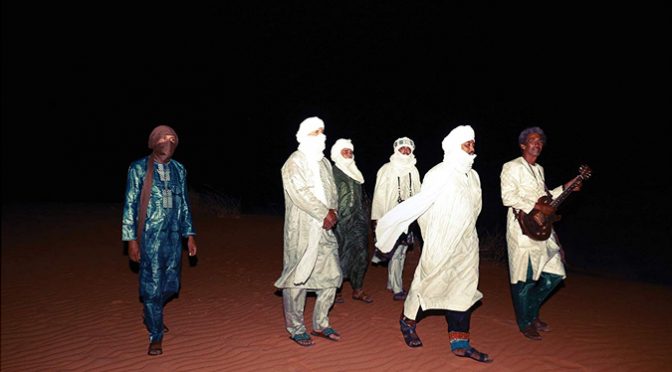 The most famous of the Tuareg desert blues bands, Tinariwen, made their new album during a road trip from southern Morocco to Nuakchot in Mauritania. The project started after Tinariwen’s October 2018 performance at the Taragalte Festival of nomadic cultures in the Moroccan Sahara. Tinariwen traveled with their French production team, who drove an old camper van that has been turned into a provisional mobile studio.

The road trip along Africa’s Atlantic coast took about 12 days. The Malian band and crew crossed southern Morocco, the Western Sahara and ended up in Nuakchott, the capital of Mauritania. Throughout the journey, the caravan stopped to set up camp. Tinariwen’s musicians made preparations for the recording and rehearsed their songs.

Once in Nuakchott, Tinariwen spent two weeks recording with celebrated Mauritanian musician Noura Mint Seymali and her guitarist husband, Jeiche Ould Chigaly. The recordings were made under a large tent, with a small number of live takes, devoid of headphones or effects.

Amadjar is a well-constructed, deeply mesmerizing album by one of the finest bands out of Mali.