Numerous world music artists are at a disadvantage in the competition for a Grammy Award. With the current system, there is only one Grammy award category for world music. This forces traditional and contemporary artists to compete with each other. Unfortunately, the better known contemporary artists are the ones that usually get selected because academy members are more familiar with them.

Other musical genres, such as Latin, Jazz, Country, and Blues, have multiple subcategories. Considering the broad musical spectrum of world music, it would make sense to create at least two world music subcategories. A group of world music professionals is trying to achieve this worthwhile goal. A letter campaign initiative has been started to lobby NARAS (the Recording Academy) to make such changes. Specifically, the creation of two subcategories. One for traditional world music and another for contemporary world music.

NARAS would be doing justice to the world music community by listening to its concerns. The creation of two world music subcategories would be a great first step.

London, UK – Fiebre, a new album by Spanish world fusion band, Radio Tarifa, will be out soon in the form of a live album. Recorded during their 2002 tour, it will showcase the group’s unique musicianship in a live setting. A great live attraction, Radio Tarifa will tour again this year.

Radio Tarifa is the brainchild of Faín Dueñas, a former electric guitarist who realized that playing Anglo-Saxon rock wasn’t leading him anywhere. Instead, he sought new paths and learned about other kinds of music from foreign and southern Spanish musicians. Currently, he has become an specialist in African and Arabic percussion, as well as in string instruments from the lute family such as the Turkish cümbüs, the guimbri, sentir, ud; and Flamenco guitar.

The Gift (Triloka 85228) teams Moroccan musician Hakmoun with American-born producer Fabian Alsultany. The two have tackled the landmark task of bridging Moroccan Gnawa sounds with Arabic music while maintaining a forward-looking sound. Alsultany recruited over a hundred musicians to fill out the sound with strings as is common in popular Arabic music.

Hollywood, USA – Cuban bass player Israel “Cachao” Lopez has been praised for his musical contributions with a star on the Hollywood Walk of Fame in Los Angeles, California. The 84-year-old musician is best known as one of the creators of the mambo.

Lopez’s star ceremony was celebrated in front of the King King nightclub on March 14, 2003. Cachao’s star will be the 2,219th star on the reputed Walk of Fame.Attending the ceremony were actors Andy Garcia, who produced and directed a documentary on Lopez in 1993 and Edward James Olmos.

In 1939, Cachao along with his brother, Orestes Lopez, developed the mambo. The popularity of the mambo reached its heights during the 1950s with help from bandleader Damaso Perez Prado.

Since then, Lopez has been the recipient of Grammy Awards and international acclaim.

Naples, Italy – Neapolitan singer and legend, Roberto Murolo, died Thursday, March 13, 2003 in Naples, Italy after an extended period of poor heath. Murolo, the 91-year-old voice of Neapolitan music, made famous the sounds of Italy with such songs like “O Sole Mio” and “Cu’umme.”

Murolo is credited for influencing many Italian musicians with his brand of Neapolitan song with its foundations based in traditional Italian folk music.

Celebrated as such a fixture of the county’s musical heritage, Murolo was honored with Italy’s highest order of merit in 1995.

Agenzia Giornalistica Italia(AGI) reported Naples’s mayor, Rosa Russo Jervolino saying, “This is a sad day for Naples.” The mayor was also quoted on new steps to honor Murolo. “His songs will be his memorial and will push ahead the project for a museum of Naples’s songs. I think Murolo would appreciate that more than a stone statue.” 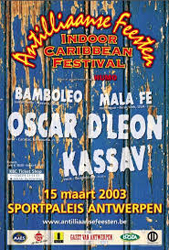 Antwerp, Belgium – Saturday, March 15 of 2003, will be the time to transform the Antwerp Sport Palace into a Caribbean dance palace. The event will feature a large stage. The whole arena will be a dance floor, with a suitable décor and non-stop music until the wee hours.The Caribbean Festival – Indoor Caribbean Festival continues with the very strong tradition of the summer festival. The program also lists the biggest names in salsa and merengue. Four top groups from the Caribbean region, from Havana, New York, Caracas and Guadeloupe will be responsible for an unforgettable tropical evening, where *censored*tails and an exotic cuisine will also constitute part of the magic.

The festival will host a forum of artists representing their various Caribbean origins and their musical diversity:

In 2003 the four top groups alternating with DJ El Flaco are as follows: 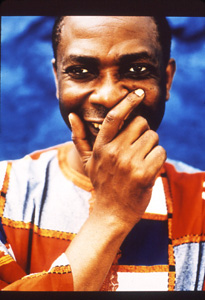 Renowned Senegalese singer Youssou N’Dour has announced the cancellation of his seven-week tour of North America scheduled to start on March 26, 2003.

Citing a possible war on Iraq as reason for the dissolution the 38-city tour, N’Dour insists that the United Nations should have sole responsibility for disarming Iraq. He also has questioned the intentions of the U.S. government in pursuing war with Iraq. News sources quote N’Dour saying, “I believe that coming to America at this time would be perceived in many parts of the world – rightly or wrongly – as a support of this policy, and that, as a consequence, it is inappropriate to perform in the U.S. at this juncture.” N’Dour suggests that he will return to the U.S. “in better times.”

Youssou N’Dour is a Grammy-nominated musician and UNICEF ambassador, with superstar status in Senegal and a world wide following. N’Dour, known widely for international hit “Seven Seconds” with Neneh Cherry, is one of Africa’s best-selling musicians.

(Prensa Latina) Havana, Cuba – Italian singer Zucchero will organize a great peace concert in Cuba with the participation of famous musicians such as the Cuban pianist Chucho Valdés.

Zucchero told the local press that he was preparing a show for at least one million people, to warn them against violence. Although he did not mention the date of the concert, it is expected to take place in 2003. Other guests are the outstanding Cuban pianist Gonzalo Rubalcaba, who asserted that the concert would be a success. The Italian musician expressed his satisfaction with his tour of the Island “because mixing my music with that of Cuba has been a dream for many years.”

Amsterdam, the Netherlands – Irshad Hussain Khan died in Amsterdam on March 5th, at the age of 29. His health had been declining for a couple of years and he died of total exhaustion.

Music, especially the music of India, was his passion. Irshad was a well respected tabla player and his playing was characterized by technical virtuosity and tonal quality.

Irshad stemmed from a long line of Indian musicians (the Jaipur Gharana). His father Ustad Zamir Ahmad Khan, also a tabla player, introduced him to the tabla at the age of three. Irshad’s approach was strongly based on the old styles and the traditional repertoire, but he combined this with much of his own improvisational creativity.

As a very promising tabla player of the younger generation he has had the opportunity to accompany many great musicians of Indian classical music such as: Pandit V.G. Jog, Ustad Munir Khan, Pandit Hariprasad Chaurasia, Ustad Sayeeduddin Dagar and G.S.Sachdev.

Irshad was always open for new possibilities and combinations with different musicians, styles and traditions. He performed with many well-known musicians in the fields of jazz and worldwide music traditions such as: Theo Loevendie, Joachim Kühn, David Vriessen, Philip Catherine, Ross Daly, and with percussionists like the Iranian zarb maestro Djamchid Chemirani and the African master drummers Fodé Youla, Adama Dramé, Omar Diabaté and Alfa Camara.

Irshad recorded and produced numerous CD recordings. He recorded a solo tabla album for Pan Records. His last production, released just several weeks before his death, was an album with the sarangi playing of his grandfather Ustad Munir Khan.

Mexico City, Mexico – A traditional music festival set for the first week of March 2003 offers an
opportunity to learn about Mexican music, in particular, the music of Tierra Caliente, as well as traditional music from other countries. The Seventh Annual Encuentro de Dos Tradiciones will take place in Mexico City, Zitácuaro, Michoacán; and Tlapehuala, Arcelia and Cd. Altamirano, Guerrero between March 3 and 10.

The festival features award-winning, 90-year-old Juan Reynoso, known as Mexico’s Paganini of the Hotlands, plus Alan Jabbour and Bertram Levy with Old Time Tunes from Appalachia.

Other fine musicians from both Mexico and the United States will participate in 3 days of conferences and workshops in Mexico City and a 6-day trip to provincial Mexico where everyone is welcome to be part of the audience or participate in any of public concerts held infour different towns.

The bus tour from Mexico City to Tierra Caliente will also include a trip to the Monarch Butterfly Reserve, opportunities for jamming with other musicians and dance workshops. Not including airfare to Mexico City, the trip costs US$ 465 (March 6-11) or $540 (March 3-11) in
shared accommodations. For more information, write lindajoy@laneta.apc.org. Phone: +52 71-3430, Fax” + 52 73-4979.