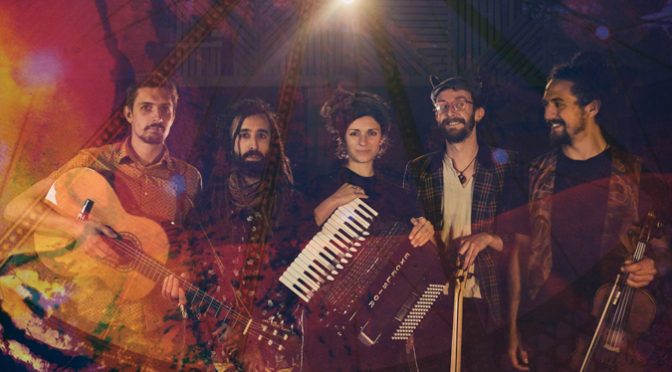 Solana is a world music fusion band originally founded in Valencia, Spain in 2012. Solana combines rhythmically complex and harmonically rich music inspired by folk traditions from around the world.

Solana has a new video titled “Odd Elegy / Allegedly Odd.” Flute player Tamsin Elliott provides details about the video: “It includes a cover of Dhafer Youssef’s Odd Elegy and a string of my own tunes collectively called “Allegedly Odd”, which I composed in response to Youssef’s piece. The arrangement is by the collective brain of Solana. It feels like quite an achievement to finish this video after a year of quite serious health issues which turned my world upside down.”

Q – The band is currently based in the UK but it was started in Valencia, Spain. How did you guys come into contact with each other?

Siblings Tamsin and Rowan Elliott have played music together from a young age. In 2012 they both coincidentally moved to Valencia and reconnected musically, playing in small bars and social centers. They were joined by original guitarist Alex Dickinson and Valencian percussionist Elio Arauz de Marcos.

Solana rapidly gained a following in the city due to the appetite for Celtic and Eastern European folk music there. In the intervening years the band’s sound and line-up have evolved to the present five-piece.

Q – What’s the background of the musicians in Solana?

Tamsin (flutes/accordion) and Rowan (violin) Elliott were brought up on a diet of world, folk and reggae and spent family holidays at festivals such as WOMAD. This exposure to a large variety of music from around the world, as well as the Celtic sessions in the local pub, has influenced their music-making to this day.

Elio Arauz de Marcos learned percussion from the age of eleven and played various styles from reggae and ska to Latin and traditional Valencian bands. After a few years of mainly playing guitar he rediscovered his passion for drums through the music of Solana. He also fronts rumba, Latin, afrobeat project The Globo Collective on guitar and vocals.

After years of playing guitar, JP Wolfgang discovered and fell in love with the Flamenco tradition and moved to Madrid to study with El Entri in the famous Caño Roto Madrid.

Henry Edmonds’ background in jazz and post rock has brought a gnarly edge to Solana’s sound. He enjoys the challenge of fusing different world grooves with more progressive arrangements, and the opportunity to play both upright and electric bass.

Q – You released an album in 2017. How was that experience and what exposure did you get?

Camino (2017) was recorded over four days -and four sleepless nights- at Henwood studios near London. This is our first album of wholly original compositions and it was with this recording that we began to find our own unique sound. We were lucky to count on the expertise and patience of our childhood friend and all-round musical genius Tom Excell who engineered and co-produced the album.

We received great reviews, with the album being described as “thoroughly invigorating” by Songlines, “A fervent and fertile form of world fusion” by Shire Folk, and our favorite from Folk Radio UK saying that “They make my spice shelf look boring… an accomplished and colorful album”.

Q – Are you working on a new album?

Yes, we have lots of new material and are really exited to get it on record. Tamsin is currently waiting for a major operation to sort out ongoing health problems, so touring is on hold until we have a date, but in the mean time lots of work is happening on new compositions and arrangements! Expect the next album to demonstrate a rich sonic tapestry, sometimes playful and often poignant, anchored by a deep respect for traditions. We’re looking forward to sharing something new and bold that goes beyond classic folk conventions.