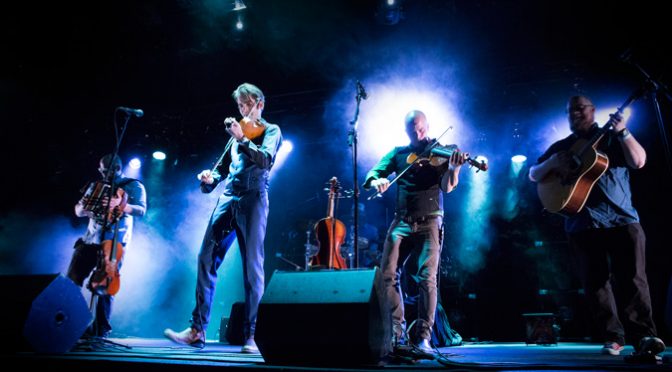 Scandinavian band Sver will be touring North America this month. The ensemble includes musicians from Norway and Sweden. Sver will be presenting its new album Reverie, a set of musical pieces that combine acoustic Nordic folk, bluegrass influences and powerful beats through the use of a drum set.

Sver includes Norwegian and Swedish musicians, how did you all meet?

Leif Ingvar (accordion) and myself grew up in a small mining town in Norway. We started playing together when we were around 15. We had some ideas about getting a guitarist to join us, and that happened around 2005. Then it’s a lot of coincidences, but in short, we met Jens and Anders through the Ole Bull Academy, the music college in Norway, and then Adam, the guitarist, joined us later.

The members of the band live in different cities and countries. How do you coordinate tours, rehearsals and recordings?

We usually decide some dates for rehearsing, say 2-5 days. When it comes to touring, it really doesn’t make a big difference living in different cities. We meet up where we are going to play, anyway.

How has your style evolved throughout the years?

I would say we have gotten a bigger and more “epic” sound throughout the years. In the beginning we were focusing very much on arranging traditional tunes in a folk-rocky way. These past few years we have written more tunes ourselves, which suits the setting better. We also are thinking more about making music for big venues and festivals now.

Your sound combines traditional acoustic instruments with powerful, rock style drums. Do you reach any other audiences beyond the folk music circuit?

I feel that we reach out to all kinds of people. I would describe our music as acoustic folk-rock. There is a lot of energy in the way we play, but many “traditional” folk musicians also seem to find our music entertaining. So I guess — and hope — there is something to like for everyone!

In your recordings you incorporate Scandinavian folk music plus other influences like Celtic music and American bluegrass. Where do you get your inspiration from?

That’s a good question. We all have played so much Scandinavian music, so even if we would try to play an American bluegrass tune, it would probably sound Scandinavian.

Tell us a little about your latest album Reverie.

This is my favorite of our albums. The arrangements have a big range, from the large, epic tunes to the pounding, bluegrass-y tunes. We also got to work with some great people at Hedgehog Music in Sweden, and I´m very happy with the soundscape of the album.

You will be touring North America in September. What’s the lineup and what material will you be playing?

The lineup is myself on fiddle and hardanger fiddle, Anders Hall on fiddle and viola, Adam Johansson on guitar and Jens Linell on drums. We will mostly play music from our two latest albums, Fryd and Reverie. Hope to see you there!