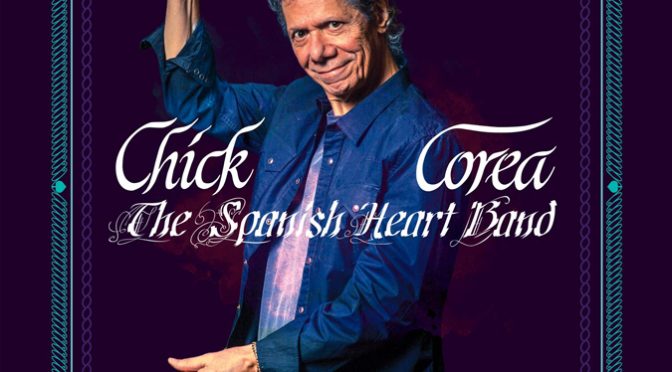 Every once in a while you come across a recording that completely stuns you, one of those where melodies and rhythms leak out, sprawl lazily across the skin and sink deep leaving you utterly spellbound and unable to anything but listen. That best sums up Antidote, out on the Concord Jazz label, by the estimable pianist, keyboardist and composer Chick Corea along with his brand new band The Spanish Heart Band. With compositions that are smart and sophisticated, a collection of musicians that make each track sizzle and all under the guiding hand of Chick Corea, Antidote is deliciously ferocious, sleekly sublime and savagely cool.

Revisiting the Spanish, Latin and flamenco influences from his own past and previous recordings such as My Spanish Heart and Touchstone, Mr. Corea assembles a dream team of musicians to realize with work on Antidote. With Flamenco guitarist Niño Josele and fellow Spaniard saxophonist and flutist Jorge Pardo, along with Cuban bassist Carlitos Del Puerto and Venezuelan percussionist Luisito Quintero, as well as drummer Marcus Gilmore, trombonist Steve Davis, trumpeter Michael Rodriquez and dancer Niño de los Reyes at his back, Mr. Corea let’s fly with his signature piano and keyboard lines in an extravaganza of Spanish tinged, Afro-Cuban goodness.

Mr Corea explains, “My genetics are Italian, but my heart is Spanish. I grew up with that music. This new band is a mix of all the wonderful and various aspects of my love and lifetime experience with these rhythms that have been such a big part of my musical heritage.”

Each track of Antidote is a bit like a turn of a kaleidoscope where all the pretty shapes and sparkly bits get rearranged into something even more spectacular. Opening and title track “Antidote” is a wildly wonderful hybrid of Latin jazz, Afro-Cuban strains and Spanish influences, made more so by vocals by Ruben Blades. Chocked full of drama set up by brass, percussion, guitar, flute, palmas and keyboards, “Antidote” is one of those tracks where every note is where it’s supposed to be and everything is right with the world and you just don’t want it to end.

Following up with the sweetly jazzy “Duende,” Mr. Corea and company settle into a fiercely cool groove before Antidote turns stunning with companion tracks “The Yellow Nimbus – Part 1” and “The Yellow Nimbus – Part 2.” These two tracks, colored heavily by flamenco flashes that include a flamenco dancer, finger snaps and palmas, are simply spectacularly drawn by way flamenco guitar, brass, percussion and piano. They are intense, dramatic and extravagantly played out before turning sleekly Spanish jazzy on Part 2.

And the goodness just keeps going with tracks like the easy sweetness of “My Spanish Heart,” again with Ruben Blades providing vocals. “Armando’s Rhumba” is a delicious Latin jazz cocktail of trombone, trumpet, guitar, bass and percussion against Mr. Corea’s piano lines. “Desafinado” dazzles with vocals by Maria Blanca in this plushy jazzy track.

Mr. Corea turns his sights on “Zyryab,” the Paco de Lucia, Joan Albert Amargos and Ramon de Algeciras composition. This track is loaded with goodies like Mr. Pardo on flute, Mr. Josele on guitar and Mr. Del Puerto on bass all backed by Mr. Corea on piano. Listeners get a sweet little listen to Igor Stravinsky by way of Mr. Corea’s lovely piano work on “Pas de Deux” before Antidote closes the recording with the easy, breezy flash of “Admiration” with a closing percussion and flamenco dance section.

TJ Nelson is a regular CD reviewer and editor at World Music Central. She is also a fiction writer. Check out her latest book, Chasing Athena’s Shadow. Set in Pineboro, North Carolina, Chasing Athena’s Shadow follows the adventures of Grace, an adult literacy teacher, as she seeks to solve a long forgotten family mystery. Her charmingly dysfunctional family is of little help in her quest. Along with her best friends, an attractive Mexican teacher and an amiable gay chef, Grace must find the one fading memory that holds the key to why Grace’s great-grandmother, Athena, shot her husband on the courthouse steps in 1931. Traversing the line between the Old South and New South, Grace will have to dig into the past to uncover Athena’s true crime.