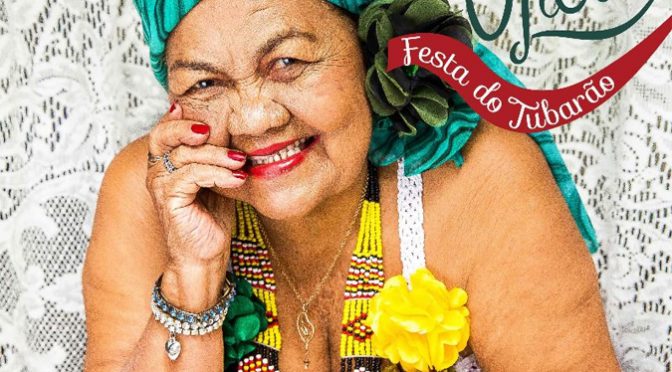 Celebrated Brazilian singer Dona Onete, who is set to turn 80 this year, has released a new single titled Festa do Tubarão – Shark Party as a digital single. The song is also available as an extended 6-minute video that takes the viewer on a wild ride through her hometown of Belem.

The track appears on her upcoming album Rebujo, scheduled for release May 24, 2019. Festa do Tubarão tells the story of a shark that swims into Belem’s Guajará Bay to have fun, unperturbed by the legend of the “Boiúna” – the giant snake who lives in the river, or the local piranha and traira fish.

The video begins with footage shot on Ilha do Combú, a forested island just south of Belem. Festa do Tubarão was filmed in various locations in the area of Belem and offers a look into this relatively unfamiliar corner of Brazil.

Brazilian directors Lírio Ferreira (co-director of Baile Perfumado) and Natara Ney take the viewers to Belem’s Ver-o-Peso – one of Brazil’s most vibrant markets – where we find legendary local herb-seller ‘aunt’ Coló. Then we fly through the city to Dona Onete’s home before visiting the Amazônia Legal marina where the ‘shark party’ is in full swing – until Onete is transported 70km to the north east of Belem to the “Boi de Máscaras” carnival in São Caetano de Odivelas where the cabeçudos (big heads) and pierrôs (sad clowns) dance with her accompanied by carnival brass-band Fanfarra Marajoara.

The title of the new album, Rebujo, is a local slang for the currents in the Amazon river that carry silt and nutrients from the river bed into the water, feeding its inhabitants and giving the river its muddy color – however, as it gives, it also takes, and the rebujo can easily overpower even the most experienced swimmer. The album featured genres such as carimbós, high energy bangues, cumbia, brega and samba.