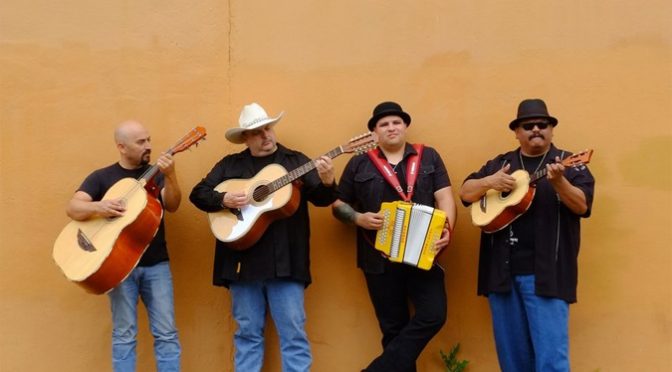 During the monthlong Hispanic Heritage Month celebration, the United States honors the culture and traditions of U.S. residents who trace their roots to Spain, Mexico and the Spanish-speaking nations of Central America, South America and the Caribbean. World Music Central has put together a list of recent recordings that showcase the diversity of Hispanic music.

Old-School Revolution is an irresistible album by the Hip Spanic Allstars, a new supergroup that brings together members of iconic bands Santana, Tower of Power, Spearhead, and Los Mocosos.

The multinational band celebrates and updates the exciting music made in the 1970s where Spanish Caribbean salsa and Latin jazz met rock and African American soul and funk.

One of the most exciting artists out of Cuba is Eme Alfonso, a talented artist that grew up in a family of groundbreaking musicians, Grupo Sintesis. Her album discography includes Eme (Colibrí) and Voy. Eme has been releasing a series of mesmerizing videos with her latest songs, including:

Cuba is also a land of extraordinary pianists. This is year there has been a wave of albums by some of Cuba’s finest, who combine jazz and Cuban roots music: Alfredo Rodríguez – The Little Dream ‎(Mack Avenue MAC1130, 2018), Dayramir González – The Grand Concourse (Machat Records, 2018), and Un Día Cualquiera by Harold López-Nussa (Mack Avenue).

One of the iconic Cuban albums of the 1990s, A toda Cuba le gusta (World Circuit) by Afro-Cuban All Stars has been remastered and reissued on vinyl.

Mexican vocalist Magos Herrera (currently based in New York) celebrates Ibero-American (the music of Spanish and Portuguese countries) culture on her new album Dreamers (Sony Music Masterworks). Magos Herrera collaborates with the string quartet Brooklyn Rider. This is not a chamber jazz album, but rather a cross-genre recording where Magos Herrera and Brooklyn Rider invited guest percussionists on flamenco and global percussion, and flamenco star Miguel Poveda.

Smithsonian Folkways Recordings has released the self-titled album Mariachi Reyna de Los Angeles. This groundbreaking all-female ensemble has served as a role model for Hispanic women in music. This is classic spirited mariachi at its best. The album includes a 44-page booklet with notes in English and Spanish.

The highly romantic boleros are very popular across the Spanish-speaking nations. A form of rootsy guitar-based bolero has developed in Mexico’s Costa Chica region bordering the Pacific Ocean.

Mexico – The Best Boleros from the Costa Chica (ARC Music) features some of the finest acts from the region, including Pedro Torres, Fidela Peláez, Chogo Prudente, Los Tres Amuzgos, and Las Hermanas García.

Gary Nuñez & Plena Libre have been touring extensively with their explosive mix of Puerto Rican plen and bomba, salsa and jazz. Amores en el Camino (Love’s Journey) is their 2018 album. The album was originally scheduled for release in 2017, but it was moved to February 2018 due to Hurricane Maria and the subsequent disaster in Puerto Rico.

Puerto Rican saxophonist and composer Miguel Zenón has released Yo soy la Tradición, his eleventh album. Yo soy la Tradición was commissioned by the David and Reva Logan Center for the Arts and the Hyde Park Jazz Festival. It is a set of 8 chamber compositions for alto saxophone and string quartet that include Zenón and the Chicago-based Spektral Quartet.

Peruvian band Dengue Dengue Dengue has a new mini-LP titled Semillero released September 2018 by On The Corner Records. The 6-track recording includes a mix of electronic music with Afro-Peruvian coastal rhythms and healing chants from the Huni Kuin people of the Amazon River.

Galicia in northwestern Spain is a land of pipers, traditionally male. The trailblazing Susana Seivane is one of the finest bagpipe players of her generation. She has just released her fifth album titled Fa.

Argentine pianist Juan Carlos Cambas has been living in Galicia since 2002. He has released “Almas en el viento / Música Argentina de raíz“. Juan Carlos Csambos has been exploring the music of countries where large numbers of Galicians emigrated to: Argentina, Cuba, Venezuela, Brazil and Uruguay.

Argentine tango and Portuguese fado come together on Tango Fado Duo (Sorel Classics). The album features Portuguese guitar virtuoso, Pedro H. da Silva and bandoneon maestro Daniel Binelli. Together, they delve into two of the most passionate musical genres in the Hispanic and Lusophone world.

Folk music band Aljibe, from Central Spain, explores the music of the Rio Tajo (Tagus River) basin on Agua. The band presents reconstructed traditional music from Castile and other regions. The CD is housed in a beautifully-packaged hard cover 144-page book with vintage photos and lots of details about the songs selected.

A Tiempo Real – A New Take on Spanish Tradition is a double set of Castilian folk music songs performed by the rising stars of Spanish folk music, Vigüela.

Chano Dominguez started as a progressive rock keyboardist with Andalusian rock band Cai and has become one of the leading flamenco jazz pianists. His most recent album is a collaboration with Spanish jazz bassist Javier Colina: Chano & Colina (Sunnyside, 2018)

Canadian flute virtuoso Ron Korb celebrates the music of Latin America and Spain on World Café, featuring Cuban and Canadian musicians with a mix of melodic jazz, tango, rumba flamenco and other influences.

Los Romeros: Royal Family of the Spanish Guitar by Walter Aaron Clark (University of Illinois Press, 2018) is an depth look at the leading Spanish guitar family in the United States, the Romeros. The family tradition was started by Spaniard Celedonio Romero who emigrated to the United States in the 1950s.