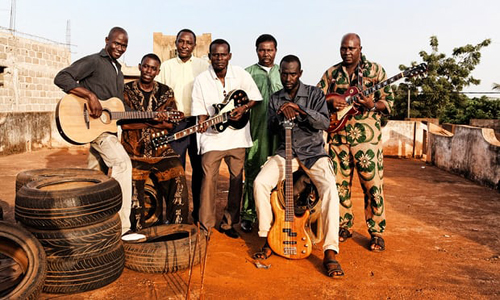 Music from Africa has always played a leading role in La Mar de Músicas. The festival has dedicated previous editions to Senegal, Mali, Morocco and South Africa. Even though this year is dedicated to the music of Denmark, African artists will be represented as well.

“We have not stopped looking at Africa in any of our editions. We will continue being one of the seminal festivals in terms of music from the African continent in Spain,” said David Martínez Noguera, Culture councilman of the Cartagena City Council.

Representing the alternative music scene of the Congo, Kokoko! will perform on Saturday, July 21. Kokoko! is a hard to define band viewed from the western perspective. Their sounds emerge from the ghetto and the gambling dens of Kinshasa, where they avoided the censorship imposed by the government.

Kokoko! is part of the “do it yourself” concept in terms of the instruments they use. They invented their own instruments with scrap objects, given the impossibility of buying the traditional ones. A typewriter, a bucket of paint, a car’s cassette player … they have become the transmitters of their creations.

The band met French producer and African music fan, Débruit, and together they merged their sound universes, electrifying the raw sound of the Congolese and offering music that merges disco sounds, psychedelia and African traditions.

La Mar de Músicas will welcome Songhoy Blues, all the way from Timbuktu. Formed by three young people who, despite the ban on music in their region, continued their work from their exile in Bamako. They released an album that says it all, Résistence, in which they collaborated with Iggy Pop. Songhoy Blues will be in Cartagena on July 22.

Another of the Malian bands that participate in La Mar de Músicas is Bamba Wassoulou Groove, an act in which three guitarists stand in the wake of the legendary Zani Diabaté, who died in 2011.

Fatoumata Diawara, originally from Mali, is a singer-songwriter who fuses wassulu music, an original style from the south of the Niger River with jazz and soul, creating a blend of modernity and African traditions with ancestral echoes. Her precious voice, trained as a theater and film performer in France and Mali, unfolds without limits in her latest work, Fenfo, which she will present in the old courtyard of the Military Training Barracks of Cartagena on July 27.

Djanka Diabaté was discovered by reggae star Alpha Blondy, who encouraged her and helped her make her first recordings. Her music combines traditional Guinean sounds and zouk and soukus influences and has made her a celebrity in Ivory Coast. In Cartagena she will perform on Monday, July 23rd along with Totó la Momposina, winner of La Mar de Músicas 2018 award.

Nélida Karr is the contemporary musical revelation of the new rhythms and sounds of Equatorial Guinea. Vocalist, composer, producer, pianist, guitarist and cellist, she has always been surrounded by the wealth of her family’s musical heritage, the landscapes of her country, jazz and gospel music.

Nélida will perform in Cartagena on Thursday, July 26, as she is one of the winners of the Vis a Vis cultural cooperation project of Casa África, in which the Cartagena festival has participated once more. Casa África is a Spanish government agency that supports cultural exchange between Spain and African nations.

On July 28, the last day of the festival, and also thanks to the Vis a Vis project, Equatorial Guinean actor Alex Ikot will perform. He’s a musician who has always excelled in the music scene of his country as a percussionist and drummer, skills that he developed from his childhood.

Álex Ikot’s resume is perhaps the most international of Equatoguinean musicians, having played during his long career with some of the greatest African musicians, such as Manu Dibango and Youssou N’Dour.