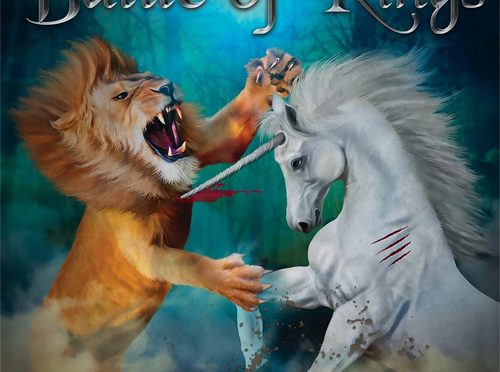 This magnificent new release by Scottish heritage band, Saor Patrol, examines events related to the struggle between Robert the Bruce and Edward II Plantagenet. Creating images of slices of life and history from three decades at the end of the 13th and beginning of the 14th centuries, the album centers on the Battle of Bannockburn, June 23rd and June 24th, 1314. “Battle of Kings” official release date is June 22nd, doubtless to align with the eve of that amazing, decisive Scots triumph.

Beginning in early 1313, Stirling Castle, held by an English garrison, came under siege by Scottish forces under Edward Bruce, brother of King Robert the Bruce. The English commander agreed in June, 1313 to surrender the castle if a relief force did not reach him by Midsummer Day (June 24th) of 1314. Specifically, an English army would have to be within three miles of the castle within eight days of that date.

This agreement compelled King Edward II of England to invade Scotland, but it also gave King Robert the Bruce of Scotland a predictable year to prepare his own plans and army. He used the time to standardize his soldiers’ equipment to a greater extent than was usual among the Scots of that period, and to drill them to move and fight in “schiltrons,” densely packed formations of foot soldiers relying on long spears. These units were highly effective against cavalry, but as highly vulnerable to archers, who could hardly miss hitting one of so many targets so close together.

Through intentional strategic prodding by Robert’s army and bad decisions on the part of the English commanders, latter were forced into a position where they could not deploy their archers effectively and had to rely on their heavy, armored cavalry, which ran fruitlessly onto Scottish spears until discipline cracked and the routed army fled as a disorganized, panicked mob across the stream (“burn,” “Bannockburn”) that ran on both sides and in back of their position, losing as many or more men to drowning as to actual combat.

Like the battle that made Scottish independence, for a time, a reality, this album follows a year of thought and planning. Saor Patrol members were, relative to their usual ways, on separate sabbaticals before going into the studio to create this new opus. Like Bruce’s schiltrons, it reflects a new level of tightness, discipline and flexibility. Frontmen Charlie “Chick” Allan (bagpipes) and Steve Legget (electric guitar) have achieved something akin to the Keith Richards/Ronnie Wood interplay that Richards famously refers to as “the ancient art of weaving,” a supportive, near-psychic knot that blurs distinctions between rhythm and lead, leaving hearers with effective punch and power.

These dozen songs are all better than good, and each is a vignette clearly evoking a moment or mood from the most focal days of Scottish history. Liner notes include background on the tunes’ themes, making the packaging an important partner piece to the CD contents.

On a larger scale, Saor Patrol itself is a partner piece to the overall project, goal and motive of the band members, which is Scottish heritage awareness through the Clanranald Trust.
After listening to the “Battle of Kings” CD a few times, fans will enjoy hearing it again while online searching “Duncarron,” a reproduction of a medieval Scottish walled town, or “Combat International,” the related medieval and ancient fight reenactment unit, or the school visits by educators from Clanranald Trust or any of the other activities that boil Saor Patrol members’ blood as their music does ours.

One does more than purchase an excellent CD with “Battle of Kings.” One acquires an informative touch of Scottish history and heritage and contributes back to it. And aren’t good Scots supposed to like good bargains?