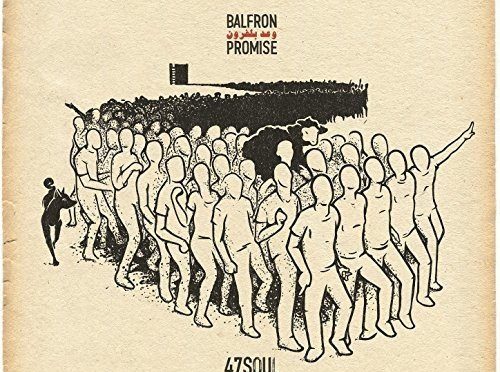 Balfron Promise is an album by 47Soul, a shamstep band that has been getting a lot of attention in the British press. Although currently based in London, the four musicians have Palestinian and Jordanian roots.

Shamstep is a genre created by 47Soul in which Palestinian traditional music such as dabke is combined with cutting edge electronic music and vocals in Arabic.

The synthesizer player produces some of most fascinating elements in the band, injecting high energy Middle Eastern melodies using distorted synthesizer sounds. The rhythm section is formidable, mixing electronic beats and acoustic percussion such as darbuka.

The lyrics focus on social injustice in London (Balfron Promise refers to residents of Balfron Tower being evicted due to gentrification) and sociopolitical problems in the Middle East.
The lineup includes Z the People on vocals and synthesizers; El Far3i (Tareq Abu Kwaik) on darbuka and vocals; Walaa Sbeit on percussion and vocals; and El Jehaz on guitar and vocals.