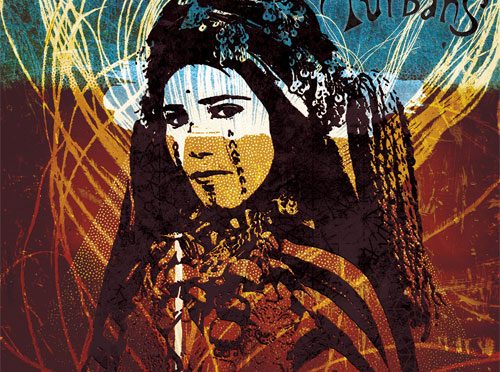 I can’t help from getting a little thrill from a band that sounds like they trekked off into the wilderness or down to the crossroads for a bit of inspiration and returned with something wholly different. That seems to be what U.K.-based band The Turbans did, except they actually retreated to a farmhouse in Northumberland. Dipping into fingers into gypsy, Balkan, flamenco, Middle Eastern and Mediterranean musical traditions, The Turbans have conjured up a sound that their Kurdish percussionist Cabbar Baba has rightly called “music from manywhere,” with band members rooted in the music of Turkey, Bulgaria, Israel, Iran, Greece, Spain and England. Their self-titled debut recording The Turbans will be available today, April 6th on the Six Degrees Records label.

The band’s Oshan Mahony recalls, “For this album we all went together to the farmhouse where I grew up in Northumberland. We all contributed about thirty songs. Some were traditional sounding, others were poppy. When ou have a classical violinist playing an Indian raga you create something really weird and new.”

And, nothing could be further than the truth on The Turbans. Possessed by a kind of feral grace and a sleek savageness, The Turbans weave a sound that is intricately explosive and hypnotically delicious so that dervishes or a raucous gypsy band might approach with more than a little trepidation. The sound is wholly global where strange and familiar coexist.

The real cleverness of The Turbans is that the group allows one genre flows easily against another creating an kind of improvisational feel where tracks flow without sounding over polished. Opening track “Riders” is ripe with Middle Eastern influences and a joyful exuberance, while tracks like “Sinko Moy” delve into a subterranean mysteriousness. “Zawi” is all whirlwind goodness with some kickass guitar lines thrown in for good measure as is the lanky lines of “Samia.” “Kansianitsa” is rich with woodwinds and percussion, while “Aman” is all flamenco lushness. There are also goodies like “Hamouda” with its call-and-response vocals and guembri in this nod to the Gnawan and the lushly worked “Chubby” with its Chaabi influences. There’s also the raucously infectious brass laced “Madhavski Horo,” the sultry ney of “Ruuah” and carnival feel goodness of closing track “Hackney.”

Mr. Mahony says of the group’s dynamic, “Every single person in this band has such a strong fire inside them. I know so many good musician in this city, and even around the world, who play perfectly, but when they play they don’t release the passion of the music. Everyone in this band has so much fire.”

Thankfully we can hear and feel the fire of “manywhere” from here.