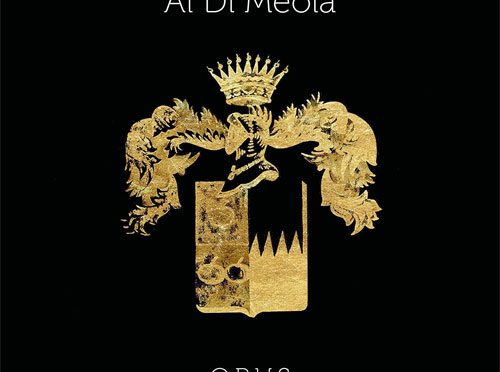 Although Al Di Meola became famous as an outstanding and pioneering jazz-rock fusion guitarist, he’s demonstrated throughout the years that his music goes much further, crossing numerous musical boundaries. Opus is a very special album. Here, Al Di Meola showcases his talent as a musician and composer in various ways.

Musically, Al Di Meola treats the listener to an exquisite set of original shape-shifting pieces where you’ll find jazz, fusion, classical, Italian music, flamenco and Argentine musical influences.
More impressive is the fact that Al Di Meola plays practically every instrument on the album. In addition to guitars, he also plays percussion, keyboards and bass and does a great job indeed. In a handful of tracks, Al Di Meola has guest musicians on piano, keyboards and drums.

The recording of the guitars is pure delight. On every track you’ll hear a mix of guitars all played by Al Di Meola. The mixing lets you enjoy guitars on different channels, delivering masterful interplay. In addition, he adds soft ambient electric guitar effects that coat lightly the acoustic guitar sounds.

Al Di Meola uses his favorite Conde Hermanos acoustic nylon guitar throughout the album along with his trademark spectacular electric guitar solos. Conde Hermanos make some of the best guitars in the world and they sound splendid in Al Di Meola’s hands.

“With Opus, I wanted to further my compositional skills as I think that the evolution of this part of my persona has labelled me more composer-guitarist than guitarist-composer”, articulates Di Meola. “For the first time in my life, I have written music being happy, I’m in a wonderful relationship with my wife, I have a baby girl and a beautiful family that inspires me every day. I believe it shows in the music.”

Opus is a magnificently-crafted, genre defying album by one of the finest guitarists in the world, Al Di Meola.