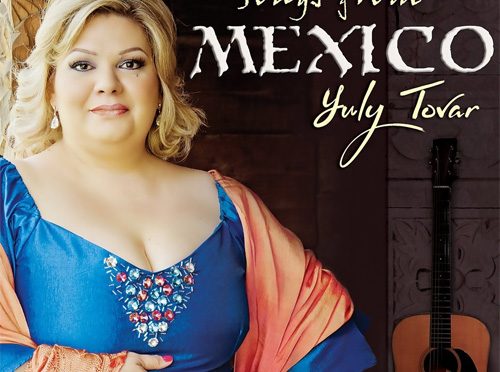 The delicate combination of chicano afterbeat and the general ear is challenging. We tend to hear eight bars of Mexican euphony of whatever quality and file it under “humorous film scene background music.” Listen to this one again. The challenge is met.

With this sort of music, one hears the message THROUGH the recording rather than along with it. The environment is established first.

The environment, for multiple award-winning Yuly Tovar, is somewhat south of the border between arid and tropical. It is a “wet” mariachi, more languid than the familiar standard, and closer to the emotion than to the technical form. The afterbeat is there, and the pull toward minor keys, but the foundation is … in the verdant bushes, rather than in the sun-beaten, dry plains.

This is no field recording, with engineers taking what they can get. The mix is absolutely the star here. Balances between sections are unique and perfect for getting the tunes across. Ms. Tovar is in perfect sync with the players, sometimes using her voice as part of the horn section, then lilting atop the strings, then laying back to encourage relaxation along with the backline rhythm. She is spotlighted throughout this release as a consummate band leader.

“Songs from Mexico” is the first global release for Ms. Tovar, already well known and respected in her own country. It should serve as a most effective letter of introduction for her.