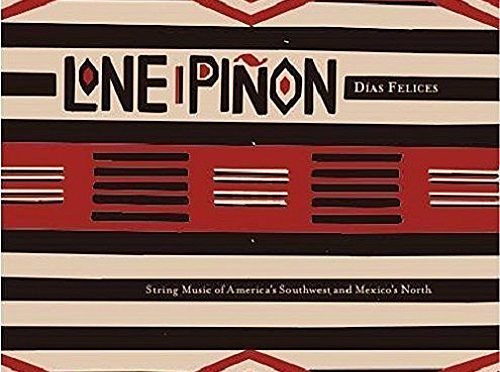 This new release from New Mexico, the self-professed “land of enchantment”, is sure to get you dancing. Acoustic trio, Lone Piñon’s second album, (literally translated Happy Days), is a fiesta of music that pays homage to the borderland’s cultural roots. The band members hail from different geographic, cultural, and musical backgrounds but have come together since 2012 to revive the New Mexican Chicano string band style. According to the band’s bio, they “bring a devoted and explosive musicianship to Northern New Mexican… and Mexican music”.

It’s a challenge not to clap, tap, or sway along with these rhythms. Catchy melodies abound, the vocal harmonies sung in Spanish, English, and Nahuatl. The instruments also sing: violin, accordion, guitar, guitarrón, and upright bass. Multiple themes recur and duel. Some are upbeat and some are dark and mesmerising. Some songs sound like soundtracks, some a wedding jig, some a square dance.

The opening instrumental track, “El Borrachito”, is a celebratory introduction and heralds the party to follow. Another fifteen tracks of dance music and crooning ballads demonstrate Lone Piñon’s complex repertoire.

Standout tracks are: “Estas Lindas Flores”, a duet of vocals and accordion in a jolly hoedown; “El Querreque”, a toe-tapper in huapango style; and “La Llorona”, alternating brisk fiddle and doleful lament that tells a clear narrative with or without lyrics.

Listening to this album highlights the pleasure to be derived from cross-cultural relationships. These Días Felices are uplifting.

Buy Días Felices in the Americas and rest of the world